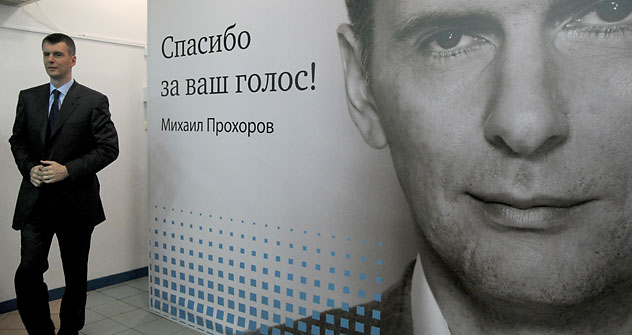 Russian presidential candidate Mikhail Prokhorov has built an election program on how he is different from Prime Minister Vladimir Putin.

Billionaire and presidential candidate Mikhail Prokhorov had released his political program and called it: “The Present and the Future.” It is available on his website. Prokhorov’s main idea is a reassessment of relations between the government and the people. “It is my firm belief, my credo, that people were not created for the government, but the government was created for the people,” wrote Prokhorov. “I appeal to the citizens of my country to choose personal responsibility over mindless obedience, a liberal economy over bureaucratic management, a law-based society over repressive control.” Prokhorov calls on people to join him in creating a new and modern Russia through creating the institutions explained in his program’s 12 chapters. These include: “Ideology,” “The Political System,” “Fair Elections,” “Economic Strategy,” “The Tax System,” “Combating Bureaucracy and Corruption,” “Law and Order and Security” and “Social Policy.”

Vladimir Putin's program: “A worthy life for the citizens of a great country”

In each of these chapters, Prokhorov compares and contrasts his vision of a particular area with that of United Russia’s presidential candidate Prime Minister Vladimir Putin. For example, in the chapter on Ideology, Prokhorov describes Putin’s main principle as: “A sole, centralized power; the government’s main goal is to control the economy and society; his [Putin’s] social base includes bureaucrats and security officials.” In contrast, Prokhorov describes his main value as: “Man’s dignity and freedom; the main priority for the government is the protection of private property; the main resource for the country’s development is citizens’ private initiative.”

The program is a confirmation of a statement by Prokhorov’s Chief of Staff Anton Krasovsky who, in an interview with the TV channel Dozhd, said that the businessman’s only competitor would be Putin. Until his recent appointment as chief of staff, Krasovsky was an executive editor, producer and co-host on the Russian television channel NTV.

At the end of December, Krasovsky released Prokhorov’s election campaign, stating that it would be “very striking” and was guided by Barack Obama’s “Yes, We Can,” slogan from the 2008 campaign. “That’s the example. It is worth being worshipped,” said Krasovsky. “I am absolutely confident that we are not the only ones who see that campaign as a kind of referential strategy.”

For now, experts are not regarding Prokhorov as a serious candidate.

“It’s clear that the authors of Prokhorov’s program did not particularly fret over it. It is basically a copy of Right Cause’s manifesto and has practically no fresh thoughts. Some of its theses are blatant absurdities. One example is the section addressing snap State Duma elections in 2012. This is impossible under the Russian Constitution unless the MPs themselves give up their mandate. Another example is the part of the document dealing with the creation of a large offshore company in the Caucasus. It immediately comes to mind that this ‘black hole’ would be extremely beneficial for big business, but we can already guess how people would react to it,” said Yevgeny Minchenko, head of the International Institute for Political Expertise.

Minchenko’s opinion is shared by political scientist Sergei Chernyakhovsky. “Everything that is stated in Prokhorov’s campaign program is far too declarative. It could have been written by any college sophomore majoring in PR or political science. It’s not clear who its target audience is. It is simply a collection of correct, controversial, and confusing proposals that will put voters in a deadlock. I don’t think this program will win Prokhorov any additional votes,” said Chernyakhovsky. According to him, the voter must “simply believe that Mikhail Prokhorov is better than Vladimir Putin,” but the document contains no evidence of this assertion.

“Obama’s campaign was indeed striking and successful. One of its main ideas was to give employers a kick for the working class. I’m not sure that Prokhorov will be able to repeat that,” Chenyakhovsky said.

This article was abridged from the original version, which can be found at http://kommersant.ru/doc/1847655.