Moscow according to Guinness 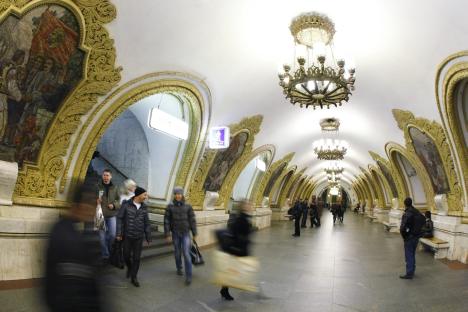 Moscow metro is recognized to be the best in the world. Source: RIA-Novosti

Moscow boasts the world’s largest cannon as well as its most impressive subway system.

For tourists who want to a way to explore Moscow apart from that laid out in maps and museum guides, the Guinness Book of World Records offers an interesting route. Even in a city where everything seems huge, it is easy to come across something extraordinary – even record-breaking.

The first place to start is the Moscow Metro. Numbers alone are not enough to demonstrate that this is one of the world’s most fascinating and luxurious subways. Its stations are covered in marble and granite, mosaics and stucco. Begun in the 1930s, the Moscow Metro splits into 12 lines that transport up to 10 million passengers a day at an average speed of 26 miles per hour.

Another site embracing the elegance and notoriety of Moscow are the Sandunovsky Baths, found at 14 Neglinnaya Street. Here, in the second half of the 17th century, the actor Sila Sandunov transformed the building into an elegant center for caring for the body. The baths are fitted out with magnificent furnishings in a Turkish and neo-classical style.

The pursuit of the sumptuous in Moscow also leads to the Tsar Cannon in the heart of the Kremlin. The biggest cannon in the world located here was cast in 1856 by Andrei Chokhov. It is 17.5 feet tall, has a diameter of nearly three feet and weights 40 tons. Just past the cannon is the largest bell ever cast, the Tsar Bell. Executed by the artist Motorin and his son Mikhail in the second half of the 16th century, it is 20 feet tall, 21 feet in diameter and weighs more than 200 tones. Its entire surface is covered with reliefs dedicated to Tsar Alexei Mikhailovich, the father of Peter I (the great).

The Tsar Cannon in the Kremlin. Source: PhotoXPress

A new Moscow milestone was reached in December 2011 in the city’s iconic Gorky Park. After a renovation to clean up and modernize the area in the spring and summer, Europe’s largest ice skating rink was erected as the winter approached. It has an area of 160,000 square feet and has separate areas for adults, children, and ice hockey.

Outside of the city center, Lomonossov Moscow State University boasts the world’s largest clock, barometer, and thermometer in the world while the All-Russian Exhibition Center at metro station while according to regular party goers, the local Art Institute on the banks of the Moscow River boasts Europe’s longest bar stretch in which to spend the endless Moscow nights. They, too, are among the most exciting in the world.