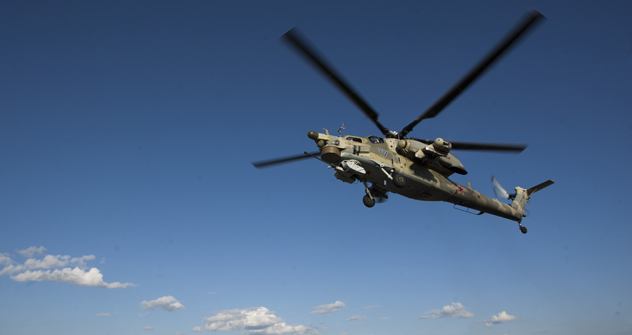 Mi-28N, also called the Night Hunter, may have lost the Indian tender, but is brimming with ambitious plans to upgrade this all-season combat machine and conquer new markets

The global market for helicopter machinery is one of the biggest in both the civil and military segments, and customers are very demanding. A striking example of the fierce competition in this market is the Indian defence ministry’s recent international tender for 22 attack helicopters. Although New Delhi is Russia’s strategic partner in military and technical cooperation, India gave preference to the U.S. AH-64D over the Russian Mi-28NE.

Indian sources cite the Russian model’s failure to match or surpass its U.S. counterpart in twenty criteria posed by the tender customer, as well as the AH-64D Apache Longbow’s superior day and night capabilities. Are these claims tenable? They forget that the Mi-28 is in service as the main attack helicopter of the Russian Air Force. Has the Russian defence ministry made a mistake?

The fate of the Night Hunter has not been easy. The Mi-28’s creation and serial production programme coincided with a very tough period in Russia’s history, as one state disintegrated and many new states were formed, including Russia. The Russian economy was in turmoil, leading to a cut in the national defence budget. While four Mi-28 prototypes were produced between 1982 and 1991, including two Mi-28A advanced versions, the first two prototypes of the Mi-28N modification weren’t commissioned until November 1996 and March 2004, respectively.

The helicopter design was later saved by a spike in energy prices which fuelled the growth of the Russian economy and proved to be a magic wand for the Mi-28 programme. In 2003, the Russian Air Force designated the two-seat, armoured, day-night military combat helicopter Mi-28N its main attack helicopter. The Night Hunter was supposed to replace the large fleet of Mi-24 helicopters.

However, some experts have questioned whether the Russian defence ministry’s decision to put this combat helicopter into service was wise or timely. They claimed that some of the helicopter systems had flaws, specifically the radar station mounted above the rotor. This is partially true, especially as far as the radar station is concerned –– it was only in development when the decision was made to adopt the Mi-28N for the Russian Air Force. Serial production of the new combat helicopter had to begin without the top-mounted radar station, which still remains undeveloped. The problem will be resolved in an upgraded version of the Mi-28N, which has been ordered by the Russian defence ministry.

“I want to make it clear that the absence of the top-mounted radar station on the serial-produced Mi-28N does not mean it has no day-and-night or all-weather capabilities, contrary to what some say,” says Alexei Samusenko, general designer at JSC Mil Moscow Helicopter Plant. “We have started serial production of the helicopter, because it can be operated day and night and in bad weather conditions, albeit with some limitations. But we have to remember that even the most advanced combat helicopter cannot be used in all weather conditions, as there are always some limitations.”

Flight tests of an experimental prototype of the radar station, which can also be used for ground mapping, began on a Night Hunter prototype on Feb 16, 2007. The upgraded attack helicopter MI-28NM was equipped with a radar station capable of searching and detecting targets for the efficient use of on-board armaments. It also serves as weather radar.

Even the MI-28N version without the top-mounted radar station that is currently in service successfully carries out its mission: to train pilots on a new generation combat helicopter, because even flying at low altitudes in the all-new helicopter – a crucial component of combat helicopter survivability – is a real challenge.

“A pilot must always fly and be trained on a maneuverable combat machine capable of aerobatics,” says Samusenko. “The more Russian pilots fly the Mi-28N, the better, and soon they will get an upgrade with enhanced combat capabilities.”

The Mi-28N is not a modified version, but an all-new combat helicopter, a completely new generation machine. The Night Hunter is unique and technically superior to both Russian combat machines and same-class helicopters in service with the militaries of many foreign nations.

Significantly, in early 2006, Russian Air Force Commander General Vladimir Mikhailov said that the army planned to procure 50 Mi-28N helicopters by 2010. However, to date, JSC Rostvertol has produced and delivered about 40 Mi-28N combat helicopters to the Russian Air Force. But production seems to be gradually picking up pace: last year alone, the Air Force received 10 new machines. Six more Hunters were delivered to Rostov-on-Don in early October 2011. The Russian defence ministry and Vertolety Rossii Holding, which consists of JSC Mil Moscow Helicopter Plant and JSC Rostvertol, signed a multiyear contract for the supply of Mi-28N combat helicopters by 2020. Starting in 2015, the plant plans to begin producing an advanced version of the Night Hunter.

A modern combat helicopter is a sophisticated, versatile aviation complex capable not only of flying and using various weapons systems, but also of effectively performing a broad range of tasks and meeting all the requirements for machines of its class in modern warfare. It must be able to perform assigned missions in any conditions –– day or night, in adverse weather, at low altitudes and in mountainous areas, at low temperatures and in hot climates.

This is why the developers did their best to deliver state-of-the-art technical and technological solutions in both airborne avionics and armament when they designed the basic Mi-28 model and its modified version, the Mi-28N. Suffice it to say that a standard Mi-28N recently made a successful record-breaking flight to Mount Elbrus.

The Night Hunter features a cutting-edge, integrated onboard equipment complex, ensuring the machine’s 24x7 operation and incorporating an electro-optical surveillance and sighting station with TV and thermal sighting system, coupled with a laser range-finder and antitank missile guidance system, as well as a turret electro-optical system with TV and thermal imaging channels, which considerably enhances piloting efficiency.

The former system is housed in the nose of the helicopter in a rotating cylindrical container, and the latter system is placed is a small rotating “ball” above this container. Also located in the nose, under a special cowl, is the command radio equipment for the antitank missile control system.

The Night Hunter’s integrated onboard equipment complex, based on a last generation onboard computer, also features a modern navigation system and piloting complex, as well as a state-of-the-art communications complex. Target, flight, navigation and other information required by the crew is displayed on the windshield in the cockpit and on four multifunction color LCD displays––two for the pilot and two for the navigator/weapons operator. The crew is also equipped with night-vision goggles for piloting the machine at night.

“One difference from the American model is that, based on our combat experience, including in Afghanistan, we have met stringent combat survivability requirements,” says Samusenko. “The helicopter has effective protective systems – both active and passive – against a wide range of weapons, from firearms to various types of missiles, even heat-homing guided missiles. In fact, our combat helicopters can adapt to warfare in which enemies are both beneath and around you; not somewhere far, but everywhere, including close to the home airfield.”

The Mi-28N has been equipped with highly effective defence systems to improve survivability, specifically laser and radar illumination stations and infrared decoys (the latter are located in removable containers mounted on the wingtips). To further increase survivability, the upgraded version, the Mi-28NM, will be equipped with a new onboard defense complex, says the developer. Other measures will be taken as well to increase the aircraft’s combat potential.

Importantly, both crew members of the Night Hunter are placed in an armoured cockpit, in seats ensuring the survival of pilots during crash landings with significant load factors. This was clearly demonstrated when a Mi-28N ended up in an emergency situation during maneuvers at the Gorokhovets training grounds.

Its heavy armour is one of the Mi-28N’s important features, giving it a competitive edge over Russian and foreign counterparts. “A crucial difference of the Mi-28N versus, say, the Apache, is that it is almost completely armour-clad. The pilot and operator’s cockpits are completely protected, and the windows are armored. The same applies to the main units of the helicopter––they are all protected: the engines, gear assembly, etc. The main rotor blades are designed to withstand hits from 30 mm guns,” says Colonel Igor Butenko, deputy director of the Centre for Combat Training and Flight Personnel Training.  The developers used composite materials in the helicopter armour and in the production of other structural components.

The big question, however, is: How netcentric is the Mi-28N?  “We conducted flight tests of the Mi-28N to check its integratability into the common command and control system back in 2006, and we were among the first developers of combat aircraft in this area,” explains Samusenko.  “During those tests, we tackled complex tasks involving searching, detecting and identifying targets, and transmitting target data to other aircraft. The helicopter also received target information from ground facilities and used it to search for targets, and detect and destroy them.”

Naturally, the Night Hunter needs to have an adequate avionics complex that meets all modern requirements in order to efficiently complete the tasks outlined by the chief designer. The helicopter is, therefore, ready to operate in the network-centric warfare and easily competes with the U.S. Apache Longbow. The final decision on a complete integration of the machine in the “network-centric contour” will, however, be made by the customer –– the Russian Air Force command.

Another issue that remains undecided is that of producing a training and combat Mi-28N version with dual controls. The issue was raised by Russian helicopter pilots, as it turned out that getting trained to fly the new helicopter was a challenging task, which was further complicated by the lack of dual controls, just as experts had predicted.

According to the developer, design documentation for the Mi-28UB training and combat helicopter is complete, and Rostvertol is getting ready to implement the project and build the first prototype. The developer plans to launch the training and combat helicopter soon and conduct a series of tests to determine when the new modification of the Hunter will be delivered to the Russian military, which is replacing the second army aviation squadron fleet with the Mi-28N.

Finally, Vertolety Rossii Holding is working to promote the export version of the helicopter – the Mi-28NE – in the world market. Algeria and Venezuela have shown an active interest in the machine. The Mi-28NE participated in a series of show flights in Algeria in July 2007, in the desert during the hottest summer months. According to experts familiar with the situation, the Hunter successfully passed testing, which included the use of guided and unguided missiles, as well as gun and cannon armaments to hit real targets. Also in July 2007, when Venezuelan President Hugo Chavez  visited Russia, he displayed a strong interest in the helicopter. There was a good chance of supplying a batch of Mi-28NE helicopters to Libya, but the deal didn’t work out. However, the export life of the Night Hunter is just beginning, and the good news is probably on the way.