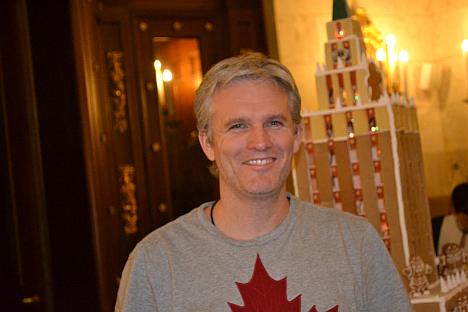 Rick Westhead, a reporter for Canada’s “Toronto Star,” has visited Russia three times, most recently to witness an historic event – the large-scale protests in Bolotnaya Square against vote fraud in the Dec. 4, 2011 parliamentary elections. He talked to Pavel Koshkin of Russia Beyond the Headlines about his experiences in Russia and his perception of the country.

Rick Westhead was already planning a visit to Russia in mid-December 2011 to cover hockey, but when protests erupted following the Dec. 4, 2011 State Duma elections, the Canadian journalist switched his beat from sports to politics. It wasn’t a new topic for the veteran reporter. In his 20-year career, he has covered a wide range of countries, including Afghanistan, Belarus and India, for a mix of organizations, including the Canadian Broadcasting Corporation, Canada’s “Globe and Mail” newspaper and the “New York Times.” Westhead spoke with Russia Beyond the Headlines’ Pavel Koshkin about his experiences in Russia and his perception of the country.

Rick Westhead: It’s not my first visit to Russia. In 2001, I came to Moscow for the first time. What I remember is my visit to Bolshoi Theater; also, I remember meetings in the hotel bar with mercenaries who had been fighting in Chechnya. These were my first impressions.

In 2008, I came to Russia again to report on the start of the hockey season, and I visited Moscow, Chekhov, Mytishi and Omsk just to get a better understanding of the prospects of Russian hockey.

Russia Beyond the Headlines: And now it’s your third visit to Russia.  This time you came to cover the hockey games in Yaroslavl. Sports are believed to be a good tool for establishing close ties and mutual understanding between countries. To what extent can it contribute to strengthening positive relations between Russia and Canada?

R.W.: I don’t think that the games are going to bring us closer, but I think it is a starting point. Canada and Russia do not have the best relations politically, but there are a lot of reasons that they should.  And sports are among these reasons. Hockey is popular both in Russia and in Canada; It gives us a reason to talk. At least we can be involved in the conversation and get a chance to know each other better.

RBTH: What do you think about the 2014 Olympic Games that are going to be held in the city of Sochi. From your point of view, what impact will it have on Russia?

R.W.: It’s obvious that Olympic Games are very expensive. It costs a lot of money to build the venues for the games and maintain operative expenses. Personally, I think there are better way to spend the money in your country instead of spending it for the Olympic facilities. Nevertheless, Russia can benefit from the 2014 Games. Typically, when you host the Olympics you build new facilities in the cities, new ice rinks, and indoor stadiums, new basketball courts, new hotel and internet connections, new phone lines. The Olympic Games are two-week event, but all these infrastructure improvements last for decades.  We remember that the 1980 Olympics in Moscow helped the city’s economy. The same thing happened in Vancouver in 2010. If you are going to hold the Olympics you look forward to the fact that locals will able to move in new houses and use new roads after the Olympics.

RBTH: You have a lot of international experience and have visited a lot of countries as a reporter for “Toronto Star.” In this context, how do you find Russia in terms of favorable working conditions?

R.W.: Fortunately, I have some friends in Russia who helped me communicate with people. After all, if you know somebody, it is easier to work in any country. I like the large cities like Moscow. I appreciated the public transport in Moscow; the metro is indeed the best in the world in terms of its efficiency and cleanliness. I also appreciate smaller cities like Yaroslavl. It has beautiful streets and amazing architectures.  Besides, it’s on the water; every city on the water has an advantage. So, I was comfortable in Russia wherever I went. Definitely I was in situations in Afghanistan that were much more complicated than in Russia. Indeed, Russia is a good place to work.

Communication is the key. If you can talk with somebody, if you can laugh with somebody, if you smile, you will be able to get along with people, which make your work easier. However, sometimes it was complicated to talk with Russians in English because they were a bit uncomfortable while talking even though they do speak English. But regardless of this barrier, at the end of the day, every time I asked for help, people were very responsive and helpful.

RBTH: Initially, you came to Russia to cover the hockey games but in the end, when the large-scale protests took place in Bolotnaya Square following the alleged vote fraud during the 2011 State Duma elections, you didn’t hesitate to jump at the opportunity to go to the demonstrations and write about it.  You witnessed a historic event. What did you feel?

R.W.: It was important what was happening in Bolotnaya Square, especially in the context of the recent protests in different countries. We’ve seen the regime changing in Libya, Tunisia, and Egypt. In recent history, Russia doesn’t have a tradition of taking to the streets for public protests. It’s really interesting to watch whether this type of the large demonstrations which gathered - if the number is accurate – around 50,000 protesters. It is almost double the amount we expected.

RBTH: Did you change your mind about Russia after your three visits? Did it help to contradict the stereotypes about the country?

R.W.: The stereotypes I had about Russia were good ones: hockey, rich culture and fascinating history. My trips to Russia just reinforced my ideas about Russia. I’ve always loved the idea of being able to experience this country and get to know people here. I hope to keep coming back.

R.W.: Russia is one of the BRICS countries, and Canada does take this into account. There is a growing appreciation that these countries’ economies are going to be engines that will drive the world economy in the 21st century. There is a demand for news and information about Russia in terms of trying to appreciate how Russia is changing. What do Russians want from the government? How many Russians have the access to the Internet? Is the living standard increasing? What happens with culture and religion? And, of course, what happens politically? And these issues are interesting for us.  So, right now there are two correspondents [in Russia] for my newspaper “Toronto Star:” myself and my colleague who is in the Far North writing about oil and gas exploration.