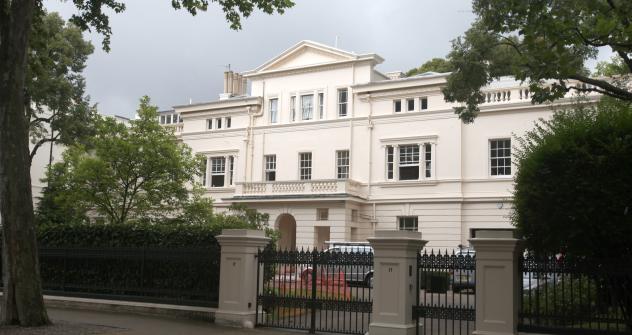 The extravagant lives of Russian oligarchs are a constant source of fascination to the British public. We take a peek at their lives in London – their homes, what they buy, their social excesses as well as their battles and business interests.

We may be anxious about the murky KGB histories of Russian oligarchs or the suspected shady criminality of their business methods, but we love to talk or read about the glamorous lifestyles of these ultra-rich people. After all, what could be sexier than an ex-spy with lots of money? And their fabled excesses and arguments amuse us as much as they appal us. So, whatever your interest – spy-catcher, gold-digger or just plain curious, we trace the tracks of some of the rich Russians in London.

Nobody passing the Battersea heliport would imagine we were in the grip of global recession or European financial meltdown. Every couple of minutes, a waspish little craft comes buzzing in over the Thames-side tower blocks to settle on the windy landing pad. It’s a copter-spotters dream.

There is a clue as to the nationality of some of the heliport’s customers a little further along the river. The exclusive, waterside Mayak restaurant, which has (according to its website) ‘got rather good at throwing parties’ and ‘never said no yet to any weird request’, has an events menu in Russian, which features traditional soups and salads, pickles, pork lard, pelmeni dumplings, honey cake and other tastes of home.

Mark Hollingsworth and Stewart Lansley in their 2009 book “Londongrad – From Russia with Cash; The Inside Story of the Oligarchs” describe a routine trip to London by aluminium tycoon, Oleg Deripaska: private Gulfstream jet to Luton, Battersea via Sikorsky helicopter and finally Mercedes Maybach to Belgravia.

Chelsea’s Mercedes garage is just across the Thames on sought-after Cheyne Walk while the McLaren showroom has found a home inside the new elite compound, One Hyde Park. This cliff of steel and polished glass, just a diamond’s throw from Harvey Nichols, was designed by the resourceful Candy Brothers, real estate merchants who have made millions supplying luxury properties to those who can afford them.

Many of the commuters zipping in from Moscow to Battersea are arriving, like Deripaska, on business. Billionaire, Alexander Mamut, previously known for media investments and friendship with the Yeltsins, recently bought the British bookshop, Waterstones. Mamut has appointed James Daunt, famous for founding his own chain of independent bookshops across London, as Managing Director. In a controversial early move, Daunt abolished the three-for-two deal that has long been a feature of Waterstones sales. The five-floor flagship branch on Piccadilly, in the 1930s building that used to be Simpson’s clothes shop, still looks enticing and the top floor 5th View bar lives up to its name with an autumnal panorama that almost justifies the three-quid coffees.

Alexander Lebedev, owner of the Russian newspaper, Novaya Gazeta, made headlines nearly three years ago when he bought up the local London paper, the Evening Standard. Nine months later he massively increased the circulation and made it free; the paper went on to win media awards for rejuvenating the brand. In 2010, Lebedev also bought the Independent newspaper. Both papers now operate from Northcliffe House on Derry Street in Kensington, in part of the art deco department store, Barkers, and opposite the building that boasts Europe’s largest roof gardens.

Lebedev’s son, Evgeny, is chair of the companies that own both papers. Lebedev junior is unusual in the oligarch world for having grown up in London. He arrived with his father (then a Soviet diplomat) when he was eight, went to school and college here and recently received British citizenship. He has several other business and charitable interests, including Japanese restaurant Sake no Hana, and an office on Hill Street, just off elegant Berkeley Square. Julian Evans of the Wall Street Journal interviewed him there earlier this year. In the article, entitled ‘The Czar of Mayfair’, Lebedev junior explained that alongside his love of England, ‘its culture, its freedoms, its countryside’, he is also ‘very patriotic and proud to be Russian’.

Lebedev junior also told the Wall Street Journal that he was keen to change the image of Russian men as ‘vulgar, brutal crooks’. His dad, though, did not help Evgeny’s mission when he punched a fellow businessman on Russian TV in September last year.

Buying Chelsea Football Club in 2003 made Roman Abramovich one of the most famous Russians in England. He frequently flies over to London to watch his team’s matches. The club’s home stadium at Stamford Bridge certainly looks brilliant now, its polished glass and royal blue structure shining in the sunlight and its cabinets stuffed with trophies.

Oligarchs like Abramovich have also rescued the luxury yacht industry. Meanwhile their wives and girlfriends have boosted sales of top-end handbags and designer clothes. Hollingsworth and Lansley retell an old noughties joke about an oligarch on his deathbed refusing a Moscow mausoleum and asking to be buried in Harrods so that he knows his wife will visit his grave at least once a week. It is true that several London jewelers have advertised recently for Russian-speaking staff, but the sexist stereotype is looking a little threadbare in the light of a new decade. After all, Abramovich’s girlfriend, Daria Zhukova, chose to convert a constructivist bus garage in Moscow into a fabulous cultural centre and financier, Nonna Materkova, opened a not-for-profit art gallery in Shoreditch this year, specialising in Russian work.

An epic court case between the exiled businessman Boris Berezovsky and Abramovich is playing out in the Rolls Building off London’s Fetter Lane, as if it were an episode in a glamorous soap opera. Berezovsky claims he was coerced into selling oil and aluminum assets at a low price to Abramovich which resulted in huge losses for him.

Urban legend has it that Berezovsky was browsing in Dolce and Gabbana in 2007 when one of his bodyguards spotted his old friend, now enemy, Roman Abramovich, in the Hermès boutique on Sloane Street. Berezovsky took advantage of the coincidence to dash over and serve the writ that started the dramatic legal. The revelations there find a parallel exposée in Alexander Gentelev’s 2010 documentary film, ‘Thieves by Law’.

While many oligarchs are at pains to insist that London is not their primary residence, it does not stop them spending millions of pounds on luxury pads. Belgravia, Knightsbridge, Kensington and Chelsea seem to have remained favorite areas for super-prime houses.  Abramovich’s plans to convert two Lowndes’ Square mansions into a vast palace were widely reported in the British press. Buying up nine apartments, the tycoon is said to have included swimming pools, cinemas and other luxury features in the new plans, which extend three floors underground. Prime Location website values the property at £142 million pounds (about $ 220 million).

Deripaska’s place is just round the corner on Belgrave Square while, across Hyde Park, the Moscow-born American businessman Leonard Blavatnik has a mansion on the ‘Billionaires row’, Kensington Palace Gardens. With the gold and copper leaves of the London planes drifting across the peaceful lawns of gothic castles with palm-filled conservatories, it’s hard to imagine a more desirable London address.

But the ultra rich are just a tiny fraction of London’s fluctuating Russian population. There are thousands who live far more modestly, working as teachers or journalists, secretaries, students or singers, who don’t make the headlines.