A modern-day bard of the Altayan heroic epos 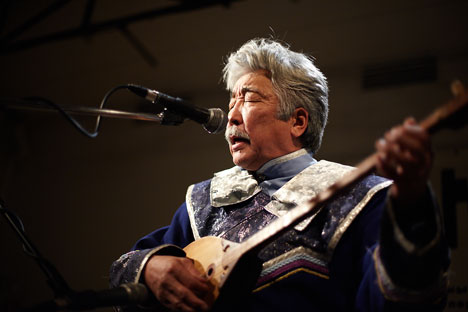 Nogon Shumarov is a contemporary holder of the ancient tradition of “kai-chi”, a traditional Altayan art whereby epic poetry and traditional legends are narrated through throat-singing (kai), to the accompaniment of a topshur.

“My people mean everything to me, and I treasure my Altai above all else” says Nogon Shumarov. He first fell in love with the traditional folk arts of the Altai region when he was in his thirties.

This man is a contemporary holder of the ancient tradition of “kai-chi”, and a modern-day bard of the heroic epos of Altai. Kai-chi is a traditional Altayan art whereby epic poetry and traditional legends are narrated through throat-singing (kai), to the accompaniment of a topshur. A topshur is an ancient Altayan string instrument (usually made from pinewood) with two strings of horse-hair. As well as the topshur, Nogon also plays the komus (an Altayan jaw harp) and several different kinds of flute.

Nogon describes what he does as “shamanism; in the good sense of the word”. The unusual technique of vibrating the throat and pharynx to form a sound is very characteristic of the religious music of the people of Siberia, Mongolia, Tibet and a few other places in the world. Throat-singing is usually a combination of the main tone (a low humming) and the voice on a higher note. A good throat-singer can create three or four vibrations at once, and the loud vibrations of throat-singing are said to be able to heal people and make them go into a trance.

Nogon’s teacher was the legendary kai-chi storyteller Alexei Kalkin, the only member of the writers’ union of the USSR who didn’t know how to read or write.  But, judging by the life-stories of some of Nogon’s relations, a desire to preserve folk traditions is in his blood. His brother made komuses, his uncle was a blind musician, and his aunt played the shoor (a traditional Altai instrument similar to a flute).

Nogon Shumarov plays a very important role in preserving and reviving the traditional culture of Altai. His personal contribution to the cause is the new and unique method of teaching throat-singing, and, thanks to Nogon, almost anyone can learn the basics of kai-chi in the first lesson. Nogon gives master classes throughout Russia, and across the world.