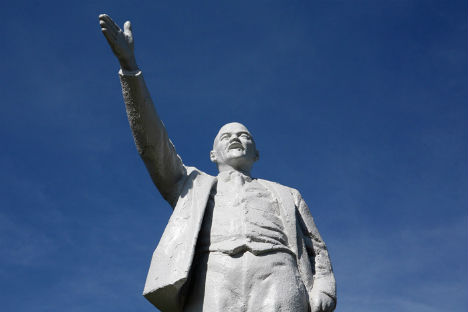 Communism is dead, but Vladimir Lenin is alive and kicking in around 6,000 statues and monuments dedicated to him, which are scattered all over Russia. Do not dare to mess with those precious monuments lest you incur the wrath of the revolutionary leader!

I have a memory going back to my kindergarten years, when we five-year-olds were made to recite poems and sing songs about Vladimir Lenin, the chief of all working people, on his birthday. My parents were supposed to take a day off to attend the festive “matinee”. I was standing, together with other children, beneath a portrait of this smiling kind bald man and singing something patriotic. And I was very proud of myself and our Soviet Motherland that I shared with him. Russian children today have no idea who “Granddad” Lenin was and why there are monuments to him all over the country.

A ride across passages of history - Moscow Metro rolls on

Apart from Christ and Buddha, no one else has ever had so many monuments dedicated to him. Stone, concrete and bronze Chiefs of the Proletariat have flooded half the world. Even the Terracotta Army of the Chinese emperor would flee before an onslaught by all Lenin statues gathered together in one place! It is next to impossible to count all the Lenin monuments erected in the 20th century, but researchers who have conducted a special study claim that about 6,000 monuments to Lenin are still extant. One of them stands at the defunct Pole of Inaccessibility Antarctic station!

Most statues of the “chiefs” point their fingers in various directions. This inspired many jokes in the USSR. One monument pointed at a prison and another one directed people to a mental home. People noted that one monument was pointing at another one, as if trying to put the blame on its counterpart. Some said there was a general plan, “the Lenin code”, for all “Lenins” in the country to point at one another, thus forming a cryptic figure.

There are different types of Lenin monuments besides the “Lenin pointing the way”. Sometimes the chief Russian Bolshevik stands pensively, hands in pockets, or walks proudly, his coat fluttering like a musketeer’s cloak, or sits on a tree stump, writing something intensely, or hugs children merrily. Sculptors often dressed Lenin in a three-piece suit and gave him a cap – the chief wanted to be closer to the working class – although they say that, when in Europe, Lenin preferred a dress coat and top hat. In the USSR, Lenin statues used the globe, an Egyptian obelisk, a railway wagon, a giant bolt and even a stack of his own books as pedestals. Sometimes he was depicted as addressing people from the top of an armoured car. Ironically, the Soviet politicians who gave up the communist ideals and chose to ruin the USSR have copied Lenin, consciously or not. Russia’s first president, Boris Yeltsin, addressed people from the top of a tank and former mayor Yury Luzhkov always wore a cap in public.

Back in Soviet times, the statues of the great revolutionary were among key propaganda instruments for the new socialist regime. People were deprived of their old god when Orthodox churches were turned into warehouses and stables and were given a new one instead. The monuments to the founder of the Soviet state were always placed “at the request of the working people” in public places, where these working people gathered – in central squares, in parks, in factories and organisations. Times have changed but the monuments are still there -- and most of the festivities and rallies in Russia take place under the gaze of Lenin’s narrowed eyes. The platforms at the feet of the Bolshevik chief are an ideal place for lovers to meet, animal rights activists to stand with their posters, medics and teachers to demand a pay rise, teenagers to roller-skate and ice-cream and popcorn vendors to make money.

Yet, Lenin monuments are not just a remnant of the Soviet era or a part of Russia’s cultural heritage. For many people, they are a symbol of the social catastrophe that hit the country, the revolutions and the civil war that mowed down millions of Russians. Pro-western democrats demand that all Lenin monuments be demolished in order to eradicate this shameful Soviet period from history and also undermine the influence of communists, which continues to linger in Russia. Russian patriots, too, hate these Soviet monuments, blaming all the troubles on these supposedly almost demonic cult items.

Since the late 1980s, an undeclared war has been waged against Lenin statues. They get broken and blasted, covered in paint and sold as scrap metal. Monuments to Stalin once lost this war, back in the 1960s, when Khrushchev, then at the helm of the Soviet state, unmasked Stalin’s “personality cult”. But the “Lenin guard”, which is much larger in numbers, still resists.

The chief of the world proletariat, who never hung out the white flag while he was alive, is ready to fight for himself even after his death. Retribution, it seems, stalks those who dare to trifle with his statues. In the village of Kalashnikovo, Tver Region, a drunk local who decided to climb the monument was seriously injured when it fell on top of him and had to be taken to a hospital. In Tula Region, a young man tried to break off Lenin’s arm. It did break off and, together with the head, fell on the young man and killed him.

Nevertheless, attacks on Lenin statues continue. Now they place a hare mask on his head, now a wig, now a plastic garbage bag on his arm. During the 1990s, the Mafia would hang rebellious gang members on the arm of a Lenin monument in Moscow Region’s Orekhovo-Zuyevo. In Yaroslavl, local youth would hurl sausages at the monument on his anniversaries. Stray dogs would gather at Lenin’s feet to howl. In Nakhodka, they painted the granite pedestal yellow, turning it into a large piece of cheese.

Rational Balts are so different! In Liepaja, they produced 500 bells from a melted Lenin monument and sell them at $300 apiece. Ukrainians are trying to keep pace and recast the loathed Bolshevik leader into a monument to Mother Ukraine, or to some prominent local bishop.

Interestingly, polls have showed that almost two-thirds of the Russian population have a positive attitude to Lenin’s role in history. In country towns, just married couples still lay flowers at the feet of Lenin monuments (partly because they have nowhere else to go).

Ninety per cent of the monuments are no longer protected by the state and are currently guarded by local communist and veteran organisations, which tirelessly restore them after they have been assaulted by vandals.

Lenin statues have recently become objets d’arts: in Ulan-Ude, they made a giant fur hat with earflaps for the enormous Lenin head standing on a pedestal. In Krasnoyarsk, they used lasers to clothe Lenin in light ninja turtle and Batman costumes during the Day of Museums. One might say it is a way to mock the chief, putting a wig or a mask on a monument. There are some like Saratov workers, however, who continue to esteem the leader of the proletarian revolution. During a monument restoration project, a bottle of vodka was discovered inside the concrete pedestal, left by a previous generation of restorers. After emptying the bottle, the workers bought a new one and put it back into the pedestal for new generations, adding a solemn address to it.

How many more generations of Russian people will grow up seeing Lenin everywhere? Some monuments will certainly collapse in time, but there are so many of them that some will stay forever, like the statues of the pharaohs. Monuments commemorating the great Russian pharaoh Vladimir Lenin, it seems, will outlast time itself!