Office plankton vs. the rest 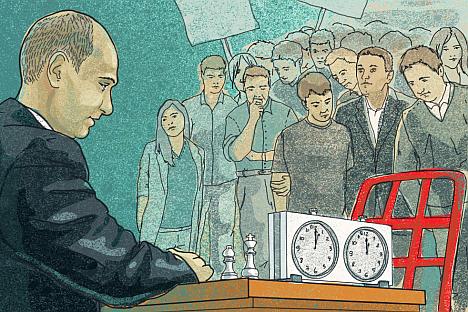 Authorities will face real problems, caused not so much by the protests of ‘angry townspeople’ in Moscow and St. Petersburg, but rather by the country’s increasing economic problems and the need to take unpopular steps in order to modernize the econo

Russia is unlikely to face a change of leadership in 2012, not only because the opposition can’t get its act together, but also because it has failed to connect with Russians beyond the urban middle class.

Will Russia erupt in full-fledged revolution during the coming year? Of course no one knows for sure, but trends that are already visible offer many possible scenarios.

The protest movement triggered by popular discontent with the results of the parliamentary elections on Dec. 4 produced the two largest demonstrations in Moscow in the past 15 years, followed by a lull during the long Christmas vacation. Objectively speaking, the period of political silence might help defuse the atmosphere. On the other hand, real ‘revolutions’ that are truly urgent and inevitable do not normally ‘go on vacation.’

There are also some other factors working against the protests, starting with their disorganization and lack of unity. Up to this point, the protests have largely been fueled by the irritation of what the Kremlin’s chief spin-doctor, Vyacheslav Surkov, called ‘angry townspeople.’ These people, the product of the relatively stable era of Vladimir Putin, are unhappy with Russia’s new political style. The new middle class is not only dissatisfied with the results of the elections (which they think were marred with blatant and gross violations, in the Soviet spirit) but they also think that the current political system does not reflect their political beliefs. Indeed, the key opposition leaders – the Communists, the moderate populist nationals from Vladimir Zhirinovsky’s Liberal Democratic Party, and the ‘soft’ socialists from the Just Russia party led by Sergei Mironov, the former speaker of the Federation Council and a friend of Putin – hardly reflect the spectrum of opposition views. Moreover, having gained seats in parliament and more committee chairs than in the previous Duma, they quickly distanced themselves from the street protest movement.  It’s safe to say that there is no union, not to mention coordination, between the street protesters and the opposition members of parliament.

The street opposition’s task now is to organize and coordinate its actions, and in order to do so, they must create a powerful new movement that can be transformed into a real political party.

It might seem that the authorities, agreeing to considerable concessions under the pressure of massive protests, are themselves creating all the necessary legal conditions for the protesters.  Under earlier regulations, for a political party to be established, it needed 50,000 members from most of the country’s regions, but now it is enough to collect just 500 supporters, with 10 in each region. So, establishing a political party has become easy––even too easy. And, given the traditional inability of Russia’s democratic opposition to agree among themselves, we can expect the emergence of dozens of tiny new parties soon, which will all compete with each other for opposition votes.

Another important disadvantage of today’s street protest movement is the lack of obvious leaders. Billionaire Mikhail Prokhorov does not yet fit the role, and not just because the rich are traditionally unpopular with ordinary Russians – especially those who racked up huge fortunes during the privatization of the 1990s, but also because Prokhorov himself has so far failed to distinguish himself as a strong political leader. His brief experience leading the Right Course party in the summer of 2011 was marred by many errors typical of inexperienced politicians.

Former finance minister Alexei Kudrin, with his increasing political ambitions, is not really suitable for the role, either. He worked with Putin for too long, and he does not hide his personal ties with the prime minister (who responds in kind). Some analysts pin their hopes on popular blogger Alexei Navalny, seeing him as a rising star on Russia’s political horizon. He gained popularity campaigning against corruption within state-run businesses, but he is little known outside of his Internet audience, and many opposition members are frightened by his nationalistic views.

Another factor working against the protests is the lack of a common platform. The protesters are all unhappy with Prime Minister Vladimir Putin and Central Election Commission Chief Vladimir Churov, but they differ on what should be done next in the country, and how to do it. A new party might help develop a strategy, program and tactics, but for this to happen, the protesters have to sit down and focus on the tedious work of organizing a political party. And in doing so, they must also be willing to compromise—something Russia’s democratic opposition has never done before.

There are other factors, too. The representatives of Moscow’s relatively well-off middle class, the office workers who took to the streets in December, have not been joined by the country’s wider population. And that means that Vladimir Putin in his bid for the presidency can count on the support of those people. He has not yet started his election campaign, but he already enjoys a huge lead over other candidates, with his approval rating hovering above 40 percent, a far cry from his closest rival, Communist leader Gennady Zyuganov, who has just a 10 percent approval rating. In other words, with an effective election campaign, Putin is sure to win in the first round of elections on March 4 without any vote rigging.

In the short term, there do not seem to be any real threats to Vladimir Putin’s bid for power; it is after the presidential election that the authorities will face real problems, caused not so much by the protests of ‘angry townspeople’ in Moscow and St. Petersburg, but rather by the country’s increasing economic problems and the need to take unpopular steps in order to modernize the economy and the aging infrastructure inherited from the Soviet era. Very soon, the authorities might be forced to raise taxes and the retirement age, and there may also be difficulties meeting the government’s numerous social obligations amid the continuing global crisis and falling oil prices. But these will be the problems of subsequent years, not 2012.

Georgy Bovt, journalist and political analyst, is a member of the Council on Foreign and Defense Policy.