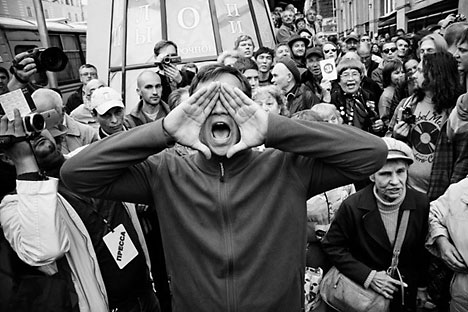 Protest 31. A photo documenting several of the rallies that took place on Triumphalnaya Square. Source: Moscow House of Photography (MDF)

The annual Silver Camera photo contest, which recently ended its exhibit in Moscow’s Manezh Exhibition Center, is organized by the Moscow government and the city’s department of culture as a way of supporting photography in Russia. Since the competition began in 2001, its prizewinners have included all the biggest names in Russian photojournalism: Alexander Abaza, Yuri Avvakumov, Vadim Gushchin, and blogger Ilya Varlamov. In addition to uncovering new talent and promoting photography in Russia, the contest is also important for forming a photographic archive of Russia’s biggest city. The competition is open to everyone, from professional photographers to students.

The Silver Camera contest divides submissions into three categories: “Architecture,” “Portraits” and “Events and everyday life.” As usual, this year’s entries include popular images of the metro, communal apartments, Victory Day parades, the architectural sights of Moscow’s Maryino district, traffic jams and ordinary people going about their everyday lives. In contrast to recent years, however, this time there were also a number of submissions depicting the social protests and political rallies that occurred in December 2011.

Visitors to the exhibition do not pick a winning photographer; they choose the best photograph. Viewers have no way of knowing who took each photo. The images are labeled only with numbers. The photographers are revealed only after the awards ceremony.

To vote for an image viewers filled out a form in the exhibition hall, or cast their votes online on social networks. Visitors were also able to like their favorite photos on the contest’s official website.

USSR — МOSCOW. Portraits of women from the 16 countries of the former Soviet Union who are now living in Moscow. These portraits are arranged next to photographs of the face of the goddess statues in the People’s Friendship Fountain at the All-Russia Exhibition Center (VVTs). The fountain, constructed during the Soviet era, was meant to celebrate the links between all Soviet peoples. Source: Moscow House of Photography (MDF).

HIPPODROME. These photographs document the hidden life of the Moscow hippodrome. The feature images of the horses, the people that come and go, and the people who work there. Source: MDF

COMMUNE. A new view of communal living - a far cry from the sad legacy of Soviet times. Source: MDF

IDEALS. A feminist project that challenges stereotypes and traditional perceptions of beauty. This is the work of a young female photographer whose husband forced her to wear high heels and have long hair. Source: MDF

TV-FAMILY. Photos of people living in Moscow. It’s a familiar picture: the television set has become a member of the family. Source: MDF

PEOPLE FROM COUNTRY. This photo-story sheds light on Russian society’s disdain for people who come from countries of the former Soviet Union. Source: MDF

RUSSIA UNDER SMOKE. Photos from Aug. 6, 2010, as Russia faced a long summer of smoke and wildfires. Source: MDF

MOSCOW’S UNDERGROUND LABYRINTHS. These images show the Russian capital as only a few have seen it: the photos show a network of underground tunnels, populated by diggers. Source: MDF