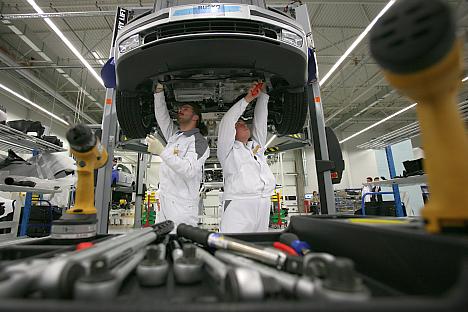 The Russian government has been making subtle efforts to persuade foreign automakers to invest in the country's booming auto industry, even as it plans to slam the door on the industry's tax incentive regime later this year. In an unexpected move, the Ministry of Economic Development said it has decided to extend the limitation period for foreign automakers that have signed on to the country's industry-assembly regime but could not take full advantage of the tax incentive because of the global financial crisis. The move, which analysts say could give fresh momentum to the heady growth of the country’s auto industry, will afford foreign automakers with dormant agreements enough time to decide whether or not to build car plants in the country.

The industry-assembly regime, which was first introduced in 2005, had allowed carmakers to import components with zero or three percent duties in return for investment agreements to make at least 300,000 cars locally a year. Some foreign carmakers have taken advantage of the tax incentive to close deals in Russia, where passenger-car sales may reach three million by 2014 to surpass Germany as Europe’s biggest auto market. A revised plan, presented in February 2010, allowed automakers to pursue the so-called semi-knocked down production during the first three years, in addition to receiving tax benefits for eight-year investment agreements. After that carmakers should start to produce engines locally, and by the eighth year local components should make up 60 percent of the vehicles.

Foreign automakers have so far signed a total of 31 agreements, 23 of which are currently being utilized in many assembly plants producing various models of Renault, Nissan, Toyota, Hyundai, Kia, Volkswagen, Peugeot and Citroen, Dmitry Levchenko, the head of special economic zones and project finance department at the Economic Development Ministry, told journalists on Monday. Levchenko said the government still plans to terminate all previously signed but inactivated agreements on the industry-assembly regime by the end of this year, a move analysts say was designed to jolt automakers into action. Levchenko warned that while the government does not intend to invalidate any of the existing agreements, the Economic Development Ministry would not be able to revise or update them next year, which could in effect render those agreements useless.

Levchenko said some of the foreign automakers, including Japanese carmaker Mitsubishi Motors, which owns 30 percent of the PSA Peugeot Citroen's PSMA Rus factory in Kaluga, are holding on to “dormant agreements,” even though some already operate car assemblies in Russia. Three other foreign automakers – Japanese carmaker Suzuki, Canadian auto parts maker Magna and the Ukrainian automobile corporation (UkrAvto) – also have dormant agreements that could still be reactivated under the industry-assembly regime, he said. However, none of those mentioned by Levchenko appeared prepared to take the government up on its latest offer, Russian newspaper Vedomosti reported on Tuesday.

Japanese Suzuki Motor Corporation signed the industry-assembly agreement in 2007, followed by an announcement that it would spend $115 million to open its first Russian plant at a St. Petersburg site in 2009. The plant, which was expected to employ 500 people, was slated to start production in late 2009 and churn out 30,000 cars per year including the Grand Vitara, a sports utility vehicle and Suzuki's bestseller in Russia, and the SX4, a crossover. However, the carmaker abandoned the plan during the 2009 financial crisis and returned a 23-hectare plot it bought for the purpose. Analysts have said that Suzuki Motor, which saw a 24-percent upswing in sales in Russia last year, could indeed afford to build a plant with a production capacity of 30,000 vehicles per year in Russia. “The only snag being that Suzuki may find it difficult to comply with the industrial assembly agreement, which entails a reduction of component imports by 30 percent over several years,” said Ivan Bonchev, an auto analyst with Ernst & Young.

The United Transport Technologies (UTT), a subsidiary of UkrAvto, had also planned to invest an estimated at $770 million to open a 240,000-capacity car plant in the Nizhny Novgorod Region in 2008. The plan, which was later shelved, was to assemble Chevrolet Lanos, commercial vehicles and Isuzu trucks at the plant by 2012. It has not been an easy ride for the Canadian Magna, too. While the auto parts manufacturer signed a memorandum of understanding last year that gave it the right to conclude an agreement on new industry-assembly regime, it has stopped short of signing an agreement. Analysts say a lack of a proprietary brand might have made it difficult for the Canadian company to find willing partners in Russia. "In addition, the Russian government has to lower tariffs on imported cars after the country's accession to the World Trade Organization, and this will inevitably reduce incentives to build new car plants in Russia," Bonchev said. "Foreign automakers will simply find it easier to import cars from their existing plants elsewhere."