How your nationality matters… 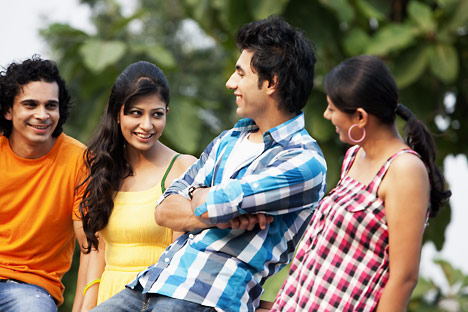 During my stay in India, I’ve realized just how strong and prevalent national stereotypes are. Even though sometimes funny or far from truth, stereotypes reflect to a certain extent how Indians and Russians view each other today.

I’ve been chatting for about 10 minutes already with a guy from a tiny tourist office in Goa, when he suddenly asked:

- Where do you come from?

- Well, I know Russians. They all are very tall and they can't speak English.

“Oh, if you only knew... That's exactly how I feel, when I'm with my classmates” - I nearly said, but then decided not to get a part of the Russian stereotype in the tourist office manager’s mind and stated proudly:

- However, I am Russian!

I have mentioned my classmates above... To make it clearer, I need to explain that I was studying in an Indian University being the only foreigner in my branch, extremely white (if not pink) and absurd (if not awkward) compared to the other students. After a while, I got to know that some of them speak English even worse than me and that the skin color was not the same for all of them. The other impression of my first days in the university was that every girl surely carried an umbrella. “Maybe I should get one for myself, if I want to find friends here,” – I considered.

One of the most frequent questions I heard those days was, of course, “Where do you come from?” I answered “from Russia” and tried to guess, what did these people actually think about me then? Here is a caricature of a typical Russian, which I’ve got from one of my Indian friends:

“He or she has very beautiful features, but lacks a smile on the face. It is because Russians take life way too seriously. Lots of them are highly ambitious persons, working very hard to get money. Money will buy them an apartment in the center of Moscow. Russia is a huge country, but it seems that everyone aspires to stay in Moscow in the same district. So, it comes naturally that the prices are extremely high there.”

Being asked about the life credo for Russians my friend made a supposition: “Maximize standard of life in whichever way possible,” - and added - “but spiritually Russians are lost in this world, that’s why they come to India to connect to their spiritual side”. It might be true, after all, the life credo for Indians in Russians’ opinion is “Take it easy” and “More haste, less speed».

“They are never in a hurry, I don't know how to make business with them!” - complained my Russian friend about her Indian colleagues. “I will tell you one more story! A boy in the office talked on the phone to his friend, his last words were 'Okay, I will be there in 10 minutes', then he turned to me laughing and said 'Did you hear this? I just lied to him! I won't be there in 10 minutes. We Indians always lie about time.' He was almost proud of this fact.”

Let's leave work aside and take a closer look at private life. There is a common stereotype that family is much more important for Indians than for Russians. On the other hand, when it comes to relationships with the opposite sex, Russians behave more freely whereas Indians are shyer, at the same time Russian men are less sticky. You don't need to ask an unfamiliar guy to go away several times before he actually does it.

One of my friends made a really interesting statement. She said that Indians are very amorous and that’s why there are separate sits in a bus for men and women. I have another explanation for the sits separation. Compared to Russians, Indian men lack gallantry, they will never give their place to a woman carrying heavy bags, that’s why there are some sits for them in reserve.

Remembering the famous proverb “You are what you eat”, it’s good to find out what Russians and Indians think about each other’s food preferences. “Indians eat a lot of vegetables, because cows are sacred animals for them. And they use too many spices, they put spices even in drinks and fruits, which is unthinkable for Russians.” “Indians love chilly! I’ve noticed that in the countries where climate is hot, food is hot as well. It prevents decaying.”

Yet, what Russians have to offer to their Indian friends? A guy, who can speak Russian a little bit, replied: “Hleb, kartoshka, kuritza, and MORE karthoshka and hleb!” which means “bread, potatoes, chicken and MORE potatoes and bread”. Well, welcome to our table!