Lavrov warns against stirring up violence 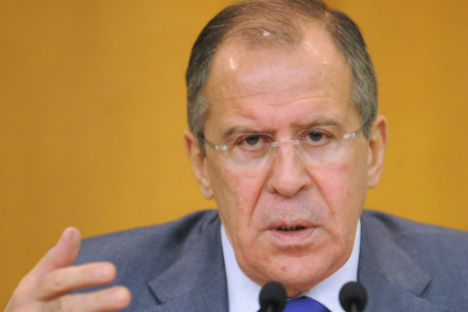 Russian diplomacy, which has been treading a difficult path in the Middle East and elsewhere, is not afraid of quarrelling with the new rulers who came to power on the crest of the Arab Spring, and is certainly not seeking to hinder renewal in the region. It is simply trying to help make this process more civilized. That, at least, is the conclusion one cannot help but draw from Foreign Minister Sergei Lavrov’s recent news conference.

Strangely, the annual news conference on the country’s diplomatic performance in the previous year is routinely held in the second half of January, not before New Year’s Eve, which the media believe would be more logical. The issues covered at yesterday’s conference also included the events of the first half of January and plans for the rest of the year.

Why all that effort?

Many of 2011’s main events will continue to influence us this year, including the unrest, revolutions and wars in the Middle East. Lavrov said nothing that was fundamentally new in his replies to questions concerning Syria, Iran and other related issues. At the same time, he provided numerous details that clarified Russia’s Middle Eastern policy.

Diplomats often have to face this kind of problem – difficulties brewing in a group of countries (regime change is always unpleasant, no matter how friendly the new authorities). The issue is – how should they react? The most obvious and simple course would be to do exactly what U.S. diplomats have done: pretend to welcome the fall of the pro-American regimes, in particular in Egypt, and pose as the rebels’ greatest friends.

What’s stopping Moscow from following suit? Why not simply recall those ambassadors who developed close ties with the previous rulers and elites, and wait while the first wave of revolts is followed by a second and then, inevitably, a third, knowing all the while that, ultimately, nothing will fundamentally change?

The Middle East is not a very important partner for Russia, and hence could be hypothetically left to its own devices for about a decade, the time it usually takes a country to recover from revolutionary shocks. By the end of that period there would be a clear cast-list of individuals we can deal with.

Yet Moscow opted for what seems to be the most difficult path. It took a firm stance against the well-armed revolutionaries in Syria, showed little respect for Gaddafi’s opponents in Libya, and in general seems to be hindering “revolutionary renewal” across the region. This is reminiscent of the approach Tsar Nicholas I took in the mid 19th century – seeking to maintain the status quo in Europe against a backdrop of widespread revolution on the continent. Of course, he paid heavily for this, forgetting that this policy was unlikely to be welcomed in Europe.

So why pursue this course? What do we hope to achieve? Why quarrel with these Arab forces which have overthrown governments simply out of a desire for change?

Not just an Arab issue

Lavrov did not give any direct answer to these questions, perhaps because they were not asked directly, yet Russia’s Middle Eastern policy is not difficult to deduce from what he said at the news conference.

First, Russia is not seeking to act, Nicholas I-like, as a reactionary force, but believes that world powers should accept the regional countries’ “choices and not interfere in national dialogues or electoral campaigns,” Lavrov said. They should do this even if they know, from their own experience, that revolutionary change is always catastrophic.

The foreign minister put forth several principles which the world powers should respect in their Middle Eastern policies.

They should not fuel conflicts and revolutions in the volatile region – there’s fuel enough as it is. Instead, they should refrain from hindering efforts to develop political dialogue in these countries, and from encouraging the opposition to take an intractable stance in any such dialogue. Most importantly, they must not arm the opposition, instead helping only those who are firmly committed to political dialogue.

These are the principles that Moscow and its influential partners are guided by during UN Security Council discussions of the Syria resolution.

Lavrov mentioned two of Russia’s firm demands in this context. One is that murder is murder, whether it is committed by a government or opposition elements, and that desire to overthrow the government does not offer immunity for the crime of murder.

The other is that the Syria resolution does not contain any provisions that could be interpreted as giving permission to use force in Syria – on the Libyan model.

It is obvious that Russia’s new Middle East policy is not focused on the Arab rebels or those who hate them. Diplomacy in the Arab world has become even more challenging, as some of the new governments in the Arab League are not very competent while others are too closely involved in fighting the Shia, which explains hostility towards Iran and its partner, Syria. This is an extremely dangerous element.

In general, Lavrov believes that the situation in the region is unpredictable, that the process of change has only just started, and hence that the world powers should act with particular caution.

But relations with Europe and the United States appear to be even more complicated. Their actions in Libya, Syria and Iran seem to indicate that Western countries, sensing their growing weakness, may try to push the Middle East into chaos and bloodshed, to keep it busy solving its problems for at least ten, or better still twenty, years. This seems to be the logic behind their policy in the region, because the new governments are unlikely to be friendly with the West.

Working to counter these Western attempts, Russia is not seeking to compete with the West on all issues. On the contrary, Moscow would like to develop new rules for cooperation with the West in this new and complicated age. The issue concerns the general principle.

Street violence is not intrinsic to the Middle East. The second largest number of street protests last year was registered in Europe, and the United States is not immune to this kind of civil disobedience either.

Russian diplomacy is not alone in its principled stance on the Middle East and elsewhere, rather, it acts as part of the BRICS group, whose other members are Brazil, India, China and South Africa. Moreover, dozens of other countries support this stance. This is not muscle-flexing by a new influential group of countries, but an effort to ensure the desired result in a civilized manner.

In other words, this is an attempt to improve the world order in a new age. It may fail, but you have to start somewhere.