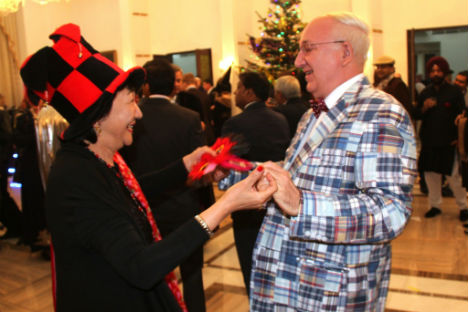 The carnival-like masked ball hosted by the Russian embassy to toast the Russian Orthodox Christmas and the New Year has become a must-attend social event in Delhi. This time around, besides a dazzling array of eye-catching costumes, the jazz band from Kaliningrad ensured that everybody danced the night away….

Beauties attired in traditional Russian headdresses dance with wolves and pirates. Wizards, witches, and pretty princesses prance around in abandon. Grandpa Frost, with his granddaughter Snow Maiden in tow, strut around in a joyous spirit. Welcome to the annual masquerade ball at the Russian embassy.

Celebrated on Jan 13 every year to toast the spirit of the Russian Orthodox Christmas and the New Year, the colorful masked ball has become a must-attend social event for the elite and the well-heeled in New Delhi.  Diplomats, socialites, journalists, businessmen and all those who are invited make it a point not to miss this fun-filled celebration. Interestingly, it is the Russian embassy that is developing the tradition of the New Year masquerade balls in India. At such parties, all guests are expected to wear carnival costumes, whether national, literary or cinematic, or just pure imaginary.

This year, some chose to buy a mask at a nearby toy store, while others had very elaborate costumes made specially for the occasion. “Masquerade balls are now somewhat forgotten as a form of diplomacy,” Russia’s ambassador to India Alexander Kadakin told RIR. “In India, we have revived them and are hosting the carnival for the third straight year. Look, how happily our Indian friends come to our ball. If people celebrate, if they are in such a good mood, it means life goes on…”  “It all began in Stockholm, in Sweden where I used to be an ambassador, and now we are introducing our masquerades to the Delhi people, too… What makes our party even more attractive is Yuri Tverdov’s jazz band from Kaliningrad.”

The jazz band was a big hit and cast its spell on a chilly winter evening. Indians, used to rocking to peppy Bollywood music, adapted to the rhythms of jazz effortlessly and had a great time dancing.

“The repertoire we brought is known all over the world,” said Yuri Tverdov, trombone player and manager for Kaliningrad Dixieland. “It’s jazz, jazz standards––something the whole world loves. We played at similar carnivals in Stockholm twice, and we are happy to be at this kind of party again, thanks to Alexander Kadakin. It is an excellent idea to promote Russia, its music, culture, diplomacy… The locals appreciate the music, Indian people are fond of jazz. I was pleased to see their enthusiasm about jazz,” said a visibly excited Tverdov.

Captain M.P. Tiwari, a senior advisor at the India-Russia Chamber of Commerce, was one of those who came dressed in his usual clothes. But after seeing this gala spectacle, he rued it. “I am one of the few people here who came without a costume–– alas, I didn’t have enough time to prepare,” confided Tiwari. “It is a wonderful carnival, and it was beautifully organised. One costume that especially caught my eye was a paratrooper. I love Russian culture, Russian songs. Today, I came to this carnival and joined a group of women dressed in gypsy costumes, and I even tried to sing a Russian song with them. It is the first time that I’ve seen such a party, and I am very grateful for the invitation…”

The carnival culminated in the selection of the best men’s and women’s costumes. This wasn’t exactly easy, since the fancy costumes included a mind-boggling variety. Dressed exotically, they were all there:   pirates and mermaids, Princess Leia with an entourage of Jedi Knights, a blue-skinned Buddha and Nasreddin Hodja, musketeers and the Cardinal’s guards, American Indians and cowboys, clowns of all stripes, the Terminator, a girl in a TV costume, and Basilio the Cat accompanied by several Fox Alisas.

The jury included Ajay Bisaria, joint secretary in charge of Russia in the external affairs ministry, Finland’s ambassador Terhi Hakala, and Kazakhstan’s envoy Doulat Kuanyshev. With such a dazzling array of costumes to choose from, they had a tough time deciding the king and queen of the ball.

Finally, the jury announced its choice. Diplomat Julia Aryaeva, dressed in a jolly red clown costume, became Queen of the Ball, and Alexander Antipin, posing as a sad Pierrot, was declared King of the Ball.

“It was a wonderful idea to hold this celebration, and the atmosphere is truly marvelous,” gushed Ramadhikari Kumar. “It seems as if we’re in Russia, it’s such a great carnival and such a festive atmosphere. But the most interesting thing is that I cannot recognise even people I know very well –– until they say who they are. They all look so beautiful. I put on this bright Indian headdress called the topi to be part of this celebration, too. In India, we wear it on formal and important occasions, sometimes a bridegroom can wear it. Today, there’s a grand party here, and I decided to wear it…”

Outside, the fireworks exploded and illuminated the winter skyline, evoking festivity and gaiety. Inside, the dance and celebration went on as though there was no tomorrow.