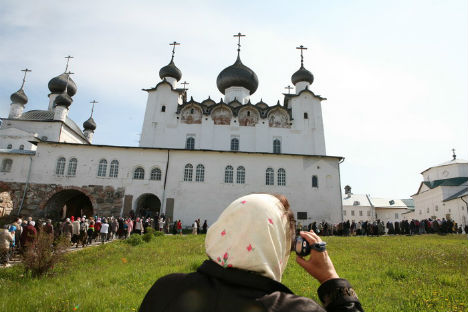 Located in the White Sea in northwestern Russia, the Solovetsky Islands once housed one of Russia’s first gulags, but now its centuries-old monastery and the seascape’s stark beauty attracts thousands of tourists and the spiritually inclined.

Barely 100 miles from the arctic circle, The Solovetsky Islands in the White Sea breathes history, mixing the secular and the spiritual. At one time, there was a prison here, no less grim than France’s Bastille, the United States’ Alcatraz, and German's Auschwitz in Poland. Since the 15th century, the local monastery has held top-notch political criminals. In those days, there were no special prison facilities; the convicted were locked up in the towers or cellars of impregnable fortresses, and the Solovetsky Monastery was one such fortress. Its massive granite walls were too tough for the Swedes, Danes, and even the powerful British fleet that besieged the monastery during the Crimean War in 1854.

The Solovetsky Monastery was an outpost for the colonisation of northern Russia. It existed almost autonomously –– the monastery was rich and influential, and had its own schools, factories, army, and navy, and its library was one of the most valuable in the Tsarist Russia. But during the socialist revolution of 1917, the monastery was looted and devastated. In the 1920s, the Solovki Special Purpose Camp (SLON) was founded here, the first in a network of concentration camps that from then on encircled all of Russia. Later, the Second World War began and Solovetsky’s street children began to train as sailors for the Northern Fleet.

But the harshest period is behind us. Today, the islands are once again home to monks, and the famous Solovetsky Islands have become one of Russia’s top tourist attractions. The reason for this is not only the out-of-this-world northern environment in these places, but the UNESCO’s decision to recognise the island as a World Heritage Site.

Now, the monastery again has its own fleet, ferrying pilgrims and tourists on boats decorated with Orthodox icons. Right in the monastery courtyard there is a divided garden where flowers and herbs grow. A bakery offers amazingly tasty pies. Incidentally, an art long forgotten in Russia still thrives here: carved gingerbread, called kozuli. Gingerbread houses, owls, bears, deer, angels, and even a carriage with coachmen, all painted and covered with icing, are sold at souvenir shops.

The better-off islanders ride around Solovki in old Soviet UAZ jeeps and new imported ATVs. People who are poorer have to do with bicycles. And to move through swamps and snow, locals construct off-road vehicles with huge inflated wheels – called karakaty – out of scrap materials. A simple stool serves as the seat, and a bear’s face is painted on the front – almost as a totem.

The population of the Solovetsky Islands primarily serves the monastery, or visiting tourists and pilgrims. Every day, the 55-year-old Maria Nikiforova walks to the pier, hoping to catch a newly arrived tourist. In her hands is a plywood sign reading, “Room with amenities.” The room she advertises is in a simple village house with a wood stove. Inside, five iron beds with mattresses are closely huddled together. This is how it is in “high tourist season,” in July and August. In June it is too cold, and it is already too cold in September. The beds vary in type and size. Maria collected them from the village’s destroyed and abandoned cottages. The promised “amenities” is a wooden toilet with a hole in the floor. There are also a few hotels in the village, but most of the tourists are backpackers or Christian pilgrims. Maria herself stays with relatives during the tourist season.

Abandoned motorcycles and trucks stand near the walls of rickety cottages. But most of the houses are inhabited. Clothes dry in the wind, hanging for a long time since the sun is not a frequent visitor to Solovki, and it can take several days for a washed shirt to dry.

After the collapse of the Soviet Union, locals went to the mainland –– there was no work on the islands. But now there is a reverse flow of people. For many, Solovki is a place to experience the ongoing revival of traditional Russian culture and spirituality. Inside a barn a marine yacht is being built according to Dutch blueprints from the time of Peter the Great. Others are trying to recover forgotten crafts: tailoring traditional kosovorotka shirts, sculpting earthenware pots, and woodcutting.

The Solovetsky Islands also attract fans of esotericism and advocates of the paleocontact theory. Ancient mazes made of stone, whose purpose has not yet been discovered, are preserved on the islands. Most scientists believe that these were places of worship for local fisherman tribes. But fans of UFOs are sure that the mazes were left on the islands by aliens, or at least by a powerful ancient civilisation. Tourists wander through the maze, hoping to attain enlightenment, or trying to meditate while sitting in the centre of a stone spiral. “You can’t wear white trousers!” a veteran esotericist instructs a girl trying to enter the maze. “The energy will be the wrong colour!”

The Church is not very approving of the pagan mazes, but at least it won’t destroy them. A ride on a Church boat with a visit to the pagan shrines is a must on the list of the major tours offered to pilgrims.

Every Sunday, there is a feast in the village. A procession of songs and Church banners snakes around the monastery. Bells ring, the parishioners carry icons, and priests sprinkle holy water on the crowd.

It seems as if all the islanders take part in the procession. Here in Solovki, it’s easy to be a believer. It helps that the monastery’s domes are visible from any part of the island, and there is the sweet sound of bells, far from the worldly temptations of big cities. To meet the needs of parishioners, there are church shops selling icons, amulets, edificatory literature, and even trouser belts with prayers. You can get up in the morning, pull on your trousers, and you’ve already done a charitable deed!

One of the major attractions is the lighthouse-church on Sekirnaya Mountain. At the very top of it, under the cross, is a huge lamp active as a lighthouse. Everything below the lamp is the property of the monastery, but the lamp belongs to the Ministry of Defence, so it’s off limits to tourists as it’s a strategic facility.

Solovetsky’s northern vegetation is beautiful in its own way. Dwarf trees grow here, and century-old moss covers the rocks. Off the coast, long seaweed splashes, and it seems like a mermaid is about to come out of the water. Unfortunately, mermaids do not appear here often, probably deterred by their view of the shore, which consists of a cemetery of rusty fishing barges. But well-fed gulls, undistracted by people, fly over the sea. They are fattened by tourists, whom the seagulls shamelessly beg for bread and pull it straight out of their hands. It seems that, for the first time in many years, happy days are here again in Solovki.