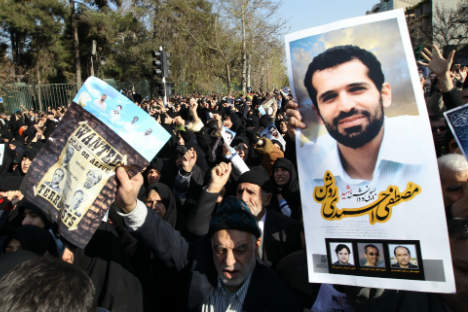 The serial murder of Iranian nuclear scientists is a pointer to the West’s moral compass. It is also a sign of desperation and double standards.

“Physics is an unhealthy line of work in today's Iran,” begins an editorial in the Australian newspaper “The Age”. The jibe follows the murder of an Iranian nuclear scientist by a motorcycle riding assassin. “I shall not shed any tears whenever one of these scientists encounters the unforgiving men on motorbikes, men who live in the real world rather than a laboratory or philosophy seminar,” the morally challenged writer continues.

What kind of dystopian world is the writer living in? When did scientists become legitimate targets and hired killers turn heroic? For several decades now Australia, in lockstep with its Western allies, has parroted the drivel that terrorism in all forms must be condemned. But because the dead scientists all worked for Iran, it’s okay to gloat.

Five Iranian nuclear scientists have been attacked in the past two years. In the latest job on January 11, a magnetic bomb was attached to the door of 32-year-old Mostafa Ahmadi-Roshan's car during morning rush-hour in the capital, Tehran. His driver was also killed and two others seriously injured.

Last year among the four scientists attacked, the most spectacular – and tragic – incident was on July 23 when Darioush Rezaeinejad was shot through the throat outside his daughter’s kindergarten.

The official, and expected, response to these murders is the “we condemn” line from Western governments. However, the unofficial statements are a stark pointer to the West’s moral compass.

The gloating didn’t end there. “I don't know who settled the score with the Iranian scientist, but I certainly am not shedding a tear,” the IDF’s Brigadier General Yoav Mordechai said on Facebook.

Settling scores with scientists? Aren’t scientists middle class folk who are simply doing a professional job their government has ordered them to do? Even at the height of the Second World War when Nazi Germany was developing nuclear technology, German scientists were not targeted.

If Iranian scientists are murdered in this macabre manner, does it then give Tehran the right to murder American, British and Israeli scientists? Indeed, the boffins conjuring up new weapons that might one day rain death over Iranian cities are legitimate assassinations targets.

The attacks, however, do not seem to be reversing Iran's efforts. On the other hand, the spate of murders could force the Iranians to step up the pace of their bomb programme because they're under such critical threat.

Iran's nuclear programme is an enormous project employing hundreds of scientists and thousands of technicians. Taking out the odd scientist, however skilled and high-ranking, is extremely unlikely to delay the project. Indeed, the project has long since passed the point where the fate of any one individual could affect it.

It is in this backdrop that the Associated Press image of Roshan and his baby is so poignant -- and loaded with portent. Thanks to the West’s elimination programme, his son will grow up fatherless in a country that is being economically strangled by sanctions.

And knowing the Iranian record of retribution, tit-for-tat murders of Western scientists or their families might yet happen. (The bombing of the PanAm Boeing 747 over Lockerbie was in retaliation for the US Navy’s downing in 1988 over the Straits of Hormuz of an Iran Air airliner carrying 290 civilians, including 10 Indians.)

At any rate, the murders are a sign of desperation. The fall of the Shah in 1979 was the biggest geopolitical setback for the Anglo-American axis. The Iranians attacked thousands of British and US expatriates, forcing them to leave the country.

American and British agents are finding it difficult to engineer a coup like they did in 1953 (when the democratically elected Mossadegh was deposed in a CIA-British coup) because the entire country is united. Except for the Balochs, none of the major ethnic groups has shown any interest in betraying their country.

Another sore point is that Iraq, where the US expended over $3 trillion and 4500 soldiers’ lives, has passed under Iranian influence. It must be frustrating to see Western style democracy transfer power to Iraq’s Shia majority, which has close links with predominantly Shiite Iran.

It is for these reasons that Iran is being demonised.

In a December 14, 2009 article in the Los Angeles Times titled “Hit Iran Where it Hurts”, US lawmaker Ileana Ros-Lehtinen accused Iran of being a state sponsor of terrorists.

Really? And what is Ileana Ros-Lehtinen's record? According to the Los Angeles Times, in February 1988, Orlando Bosch was arrested in Miami and implicated in the 1976 plot to blow up Cubana Flight 455, a terrorist act that killed 73 passengers. That’s right, 73 innocent air passengers.

The American associate attorney general called Bosch “a terrorist, unfettered by laws or human decency, threatening and inflicting violence without regard to the identity of his victims". Bosch, however, had the advantage of having Ros-Lehtinen advocating for his release one of the cornerstones of her 1989 congressional campaign. Interestingly, Ros-Lehtinen's campaign manager was Jeb Bush, President George H. Bush's son. In 1990, after lobbying by Jeb Bush and Ros-Lehtinen, the Bush administration went against the Justice Department's recommendation to deport Bosch and authorised his release.

Bosch was also a key figure in the assassination of former Chilean foreign minister and economist Orlando Letelier. It was Bosch who approved the attack and supplied the operatives who actually planted the bomb that American undercover agents built. Letelier was killed on the streets of Washington DC.

Since then, Bosch has become a permanent resident of the United States.

Clearly, hypocrisy is the West’s standing policy on foreign affairs.