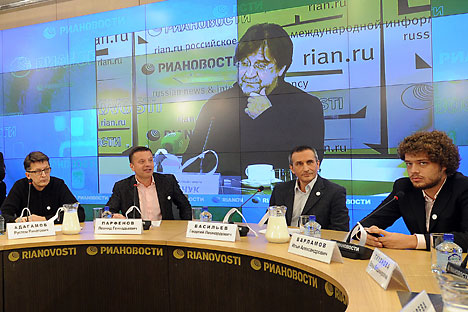 The League of Voters, an Internet-base organization hopes to involve the authorities in the dialogue over the alleged vote fraud during the Dec. 4 parliamentary elections. Pictured: Rustem Adagamov, an influential Russian blogger (under the pseudony

A group of prominent figures unveiled on Wednesday a grassroots group dedicated to fighting election fraud — and Prime Minister Vladimir Putin immediately declared that he was ready to meet with them.

The Internet-based group, the League of Voters, hopes to harness voter frustration over alleged fraud during the Dec. 4 State Duma elections, but analysts said its limited purview and the ideological divisions among its members would prevent it from becoming the frequently purposed party for the urban middle class.

The more immediate goal of the League of Voters is to turn the largest opposition protests in years into a "free and fair" presidential election on March 4. The group will use the Internet to connect activists nationwide who are agitating for fair elections.

"We want to turn people into voters," said group co-founder Dmitry Ivanov, who blogs under the name kamikadze-d.

In a possible effort to head off the group, Putin quickly extended an invitation to its founding members.

"My colleagues and I are ready to meet with them," Putin said, adding that several of the journalists, television personalities and bloggers on its membership list had declined invitations in the past.

"They don't want dialogue; they want to say there's no dialogue," Putin said at his Novo-Ogaryovo residence, RIA-Novosti reported.

His remarks echoed complaints by his spokesman Dmitry Peskov after several protest leaders snubbed an invitation to attend a media award ceremony last week. "They talk loudly about a dialogue, but when they are called, they do not turn up," Peskov said Friday.

Many of the 16 founders of the League of Voters are well known among opposition activists for their speeches and writings, and some, including television host Leonid Parfyonov and rock legend Yury Shevchuk, have nationwide name recognition. Several of the founders organized and promoted opposition rallies on Dec. 10 and Dec. 25 that drew tens of thousands of people.

Notably absent from the list of founders was anti-corruption whistleblower and opposition darling Alexei Navalny. The group said Navalny was barred from being a founding member because of his stated presidential ambitions.

At a news conference Wednesday, the founding members wore white ribbons and pins and even sipped glasses of milk — white being a symbol of the protest movement.

Criticism that the movement lacks leadership and a clear ideology is unlikely to go away, with league members describing the new group as a way to facilitate civic activism against crooked elections rather than a vanguard or even a political force. "We're not going to be commanding anybody," said businessman Georgy Vasilyev, former director of the board of telecoms giant VimpelCom.

Vasilyev said the group would be strictly a coordinating and advisory body for activists. He gave the example of a woman in Vladimir who wants to become an election monitor, explaining that through the league, she could discover the organization Citizen Observer, which trains poll monitors.

December's burst of civic activism was largely limited to the urban middle class. Asked by The Moscow Times how the league planned to transform itself into a nationwide movement, co-founder Pyotr Shkumatov, whose Blue Buckets campaigns against the abuse of VIP driving privileges, said the creation of the group itself was a positive signal that could inspire others throughout the country.

Given the league's limited purview and ideological divisions within the opposition, analysts were hesitant to attribute too much significance to its founding.

Alexander Kynev, head of analysis at the Golos election-monitoring organization, said by telephone that the establishment of the league would have no impact on the March 4 election. "This is part of an old process. There's nothing new here," he said.

Kynev also dampened expectations fanned by writer and league co-founder Dmitry Bykov, who in an interview with Gazeta.ru published on Tuesday said the group could become the foundation for a political party that would "mobilize the socially active middle class."

"The group's members are too ideologically diverse for the league to coalesce into a political party," Kynev said.

Founding member Rustem Adagamov, who blogs under the name drugoi, confirmed Wednesday that the group opposed turning the league into a party and said its members did not have personal political ambitions. A declaration on the group's web site, ligaizbirateley.ru, which will serve as the group's main organization tool, said the league would not support a particular party or presidential candidate.

The creation of the league is a logical step for a movement which lacks a common ideology, said Olga Mefodyeva, an analyst with the Center for Political Information.

"Besides free and fair elections, they have no idea what they're for," she said, adding that the league's ability to influence the presidential election depended on whether Putin would satiate its target audience before then.

But at the news conference the founders gave no indication that they could be appeased. "When the Soviet Union sent tanks into Prague in 1968, seven people demonstrated on Red Square," author Lyudmila Ulitskaya said. "Today, we have a lot more than that."