Unreal City? Getting back to nature 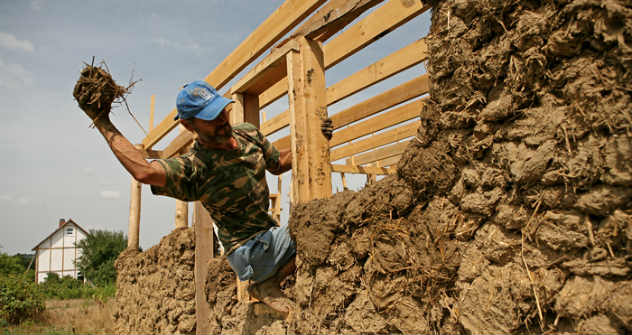 The urban stress and superficiality of metropolis is driving many Russians to villages to live in harmony with nature. Are these new-age villagers just romantics or will they tire of this new fad? There are no easy answers.

A group of people, old and young, are standing in a square pit kneading clay with their feet and toes. They spread on a layer of straw and carry on kneading. It’s a lot of hard work, but the people are laughing and joking; some even try to dance. The clay soon becomes so thick that people’s legs start getting stuck. The group bends down and starts to mould balls of clay, each about the size of a baby’s head. When the clay balls are ready the workers line up to a form a human conveyor belt, and start to throw the lumps of clay to the next person in the line. With a swing of his arm, the man at the end of the chain attaches a lump of clay to the wall and smoothes it out, and the wall gradually gets taller and wider. By the end of the summer another cobwork house will have been added to the village. A house made of earth or clay is not always the most comfortable place to live in, but it is cheap and eco-friendly. Moreover, in many cases, there are no other options; life in the village is tough and beggars can’t be choosers.

In Soviet times, life was certainly not easy, but people living under the communist regime believed that life was getting better every year, and that progress would lead to the greater good. Today, the Russian society is increasingly beset with doubt as to whether the world is changing for the better. People are starting to wonder whether this much-vaunted “progress” is leading us in the right direction.

And this is not just because mankind continues to face the problems of war, disease and famine, despite all the technological developments of the last hundred years. Neither is it because of the inescapable economic problems in today’s world, the visible social inequality and the increasing moral laxity of mainstream culture. People are now starting to question technology itself. Modern gadgets, originally designed to make man’s life easier, are no longer seen as indisputably beneficial. Various headlines in the papers, such as ‘mobile phones cause brain cancer’, ‘staring at a screen can cause blindness’, or ‘plastic objects can damage your health’, generate suspicion and even fear amongst the people who use them.

The sheer abundance of household technologies, which have only recently been introduced in Russia, have actually become the source of anxiety for ordinary Russians. More and more people fret about the possible impact of modern marvels like hoovers and televisions, toothpaste and shampoo, synthetic clothing and fast food on their health.

Is this a form of new-age obscurantism? A throwback to the middle ages? Or is it just people’s attempts to protect themselves from what they see as unsafe objects made by ruthless capitalists, who are constantly cutting corners to maximize their profit?

A few years ago Russian people flocked to the cities in quest of a more comfortable life, but now the tide has turned, and people are giving up urban seductions to start a new life in the countryside.

The traditional image of Russia is a country of rolling fields and picture-pretty villages. But after the fall of the Soviet Union most villages were ruined and abandoned, and the few people that remained turned to drink and slipped into dissolution. So where can a city-dweller go if he or she doesn’t have much experience of milking a cow or digging up potatoes? People who have quit the cities team up and form eco-villages.

What’s the difference between an ordinary Russian village and an eco-village? Inhabitants of an average Russian village were generally born there, rarely travel, and stick to strict local customs. People living in eco-villages, on the other hand, are exiles from city life, and they tend to hold on to various ideas of a pure environment. These ideas often have a lot in common with Buddhism: no meat, no cigarettes, no alcohol, a policy of non-violence and clean-living, and being in tune with nature as far as possible. This means only environmentally-friendly building materials, and nothing but the best organic food. The traditional concept of family planning simply does not exist here – people have as many children as God sees fit.

On paper, and also in many internet forums on ecological living, all this sounds idyllic - a return to a lost rural paradise. But what is it really like?

One of the most pressing problems facing these eco-pioneers is the question of accommodation, and at the moment these eco-villages mainly consist of cheap and simple houses. To build a traditional Russian wooden log-cabin they would need skilled craftsmen, and quite a lot of money – in the 21st century you can’t just go to the woods and chop down a tree. It’s therefore much simpler to build a house out of daub (clay mixed with straw), or sometimes straw on its own. Some villages have “Earth houses”, houses which are partially buried underground. This is said to solve the problem of heating, and there is probably a lot of truth in this. However, this does not stop the people who were born and brought up in the countryside from laughing at these new-age villagers: clay houses and dug-outs were the traditional abode of serf peasants before the revolution, as well as the partisans who were forced to hastily set up camp in the forest to escape the Nazis. The eco-village enthusiasts are undeterred. They say that there is nothing wrong with a cheap house – if the local authorities dismantle it, it’s not difficult to build a new one. Most of the new villagers are so wary of the government that they are prepared to live in primitive communal conditions to avoid having to deal with them.

Food is another issue. In order to “survive the apocalypse” and “guarantee the health of your children” you have to grow your own food: a good variety of it, all free of chemicals and enough to last you through the winter. The ideas of permaculture, as propagated by the Austrian farmer Sepp Holzer and Japanese writer and philosopher Masanobu Fukuoka are becoming increasingly popular amongst newcomers to the countryside, who, it should be noted, are often also new to the concept of hard manual labour. Permaculture is defined as ‘permanent agriculture’ and works on the basis that cultivated crops grow in symbiosis with wild plants, and a farmer can grow crops by working with the natural ecosystem. This means there is no need to plough the earth or use fertilisers, and the farmer does not need to worry about removing weeds and pests.

“Here is where I’ve sown my tomatoes. And there are the watermelons…I just threw the seeds and there we are - the seeds grew and I didn’t have to do a thing!” says Hare Krishna follower Valera, as he proudly shows me his vegetable garden in the Sinegorye village. He pushes away ferns and weeds, and, sure enough there is a tomato plant; I spot watermelons growing nearby. “Ideally a permaculture farmer only goes to his plot of land twice a year: once to plant the seeds, and another time to gather the harvest. And if you’re doing it right, eventually you only go once to gather the harvest!”

The Sinegorye village is in the Krasnodar Krai. It was founded by a group known as the “Anastasievtsy”, who believe in leading a simple rural life away from the big cities. Although they define themselves as a religious sect, the Anastasievtsy accept people of all religious orientations, and welcome Orthodox Christians, Hindus, Pagans and atheists; anyone, so long as they are sane and don’t drink. This is because if they were drinkers they might as well go to any village in Russia.

Valera himself came to the sunny Krasnodar Krai from the cold wastes of Primorye, where watermelon seeds would definitely not grow so well. He doesn’t drink and he doesn’t eat meat, he cooks vegetarian Indian cuisine and bakes his own unleavened bread, and, as soon as he sits down at the table he immediately wishes everyone happiness four times.

When the villagers are first starting out, they are usually able to live off whatever savings they have. But when these dry up they often face serious hardships – providing for 100% of your material needs without any form of stable income is not easy. Neither is it easy to do tough physical labour, day in day out. Valera is already building his second house – unfortunately the first one burnt down, and meanwhile his neighbours decided to build a house of daub six years ago, but at the moment all that can be seen of their new house is the framework, meaning they and their two small children are having to live in a hastily erected shelter made of polythene stretched over a makeshift frame – a structure that is more like a greenhouse than a home. Apparently this is possible in the warm Krasnodar Krai. In the village next to Sinegorye live Nikolai and Galina from Sochi. They bought a small plot of land and in just one month they managed to build a two-storey house made of…straw bales. On the outside the bales are plastered in clay, and inside they are covered in plasterboard. The owners think the house will be warm in winter and shouldn’t get too damp. The main threat to the structure are mice, but, according to Galina: “if you use rice straw, the mice won’t eat it”.

Today people in Russia are increasingly drawn to the idyll of living in harmony with nature. They dream of building a house for themselves, living in a beautiful unspoilt place and ‘returning to their roots’. The question is whether these people end up happy and contented after leaving the cities. Or does the opposite happen? Having given up all their worldly goods, do they find themselves struggling to survive in the countryside, do they become disillusioned with the dream of the rural idyll? The second outcome is very real – but one cannot fail to admire the courage of these people, who exchange a life of comfort and security for a life in the lap of nature. It’s time for the government to pause and think about alleviating the urban stress which is driving these people to leave “Unreal City” for a real village.