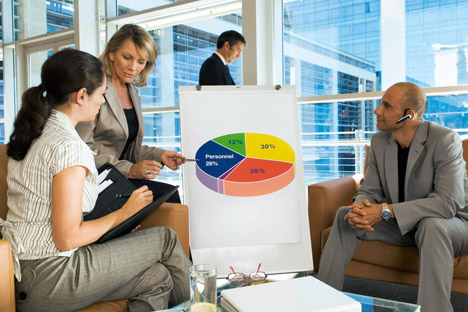 Venture capital funds are springing up in Russia investing both money and know-how into innovative start-ups.

“Comfortable office space in the center of Moscow, nifty silver MacBooks and shiny iPads, $150,000 for your prototype but, most importantly, advice from leading IT entrepreneurs and investors.” This is how the Farminers venture fund encourages new entrepreneurs to take part in its start-up academy. Founded by Igor Matsanyuk, a veteran of the Russian gaming market and Alena Vladimirskaya, Director of the Pruffi recruiting agency, Farminers offers candidates free offices, office appliances and $150,000 for equipment and salaries. In return, start-ups are supposed to supply Farminers with interesting projects, specifically online services for the mass market that can be finalized within three to six months. In November 2011, the first 15 projects were selected out of 1,500 applications, and the plan is to launch them within six months. Farminers General Director Maxim Matveyko expects the academy to process some 35-36 projects annually. The lucky candidates will be able to work on their projects under daily guidance from project managers and Farminers experts. In return for its support, the fund will acquire a 40 percent stake in each project fostered. The academy aims to sell all portfolio projects to other investors within six months.

So far, there has been relatively little investment in Russian companies during early venture capital financing stages. According to the Russian Venture Capital Association, such investments amounted to $151 million in 2010, or 6 percent of total direct investments. Of this amount, a mere $19.5 million was invested in companies at the seed and startup stages – this spread out among 29 companies. But since the second half of 2010, small venture funds similar to Farminers have started to emerge in the market, positioning themselves as business incubators, accelerators or project factories. Some examples include Fast Lane Ventures, Glavstart, Bricolage, Techdrive, and Yandex.Factory. They all look for promising startups in order to teach them business practices and raise them towards investment maturity. Unlike in more mature markets, however, these venture funds have also had to incorporate training into their support, since many Russian innovation companies have little to offer besides their ideas.

“There are almost no Russian companies at later development phases that are suitable for investing, so we have to raise what we have,” said Dmitry Repin, General Director of Digital October innovation technologies center.

Arkady Moreinis, founder of the Glavstart fund agrees: “The ideas our authors bring to us and the projects they ultimately work on are absolutely different,” Moreinis said.  Each of the 13 companies his fund has taken on has received $100,000 from Glavstart in return for a 40 percent stake.

Fast Lane Ventures is a slightly different kind of fund. It generates projects itself and then invites startups to join in. The online footwear shop Sapato.ru is believed to be its most successful project.

This winter, TexDrive will launch biannual three-month accelerated development programs, during which about 70 Russian and 30 foreign mentors will give marketing, management and economics advice to young innovators. “During this period, these companies will be able to complete what would otherwise take them 9 to 12 months,” said TexDrive partner Andrei Kessel. In November 2011, the accelerator fund chose 10 startups out of several hundred applications. Each of the 10 participants in the acceleration program will receive $25,000 right away and another $125,000 during the final phase of the project, in exchange for a 10 percent stake. After that, TexDrive promises the chosen ones $1 million from American angel investors.

The funds make it clear that this symbiosis of a mentoring investor and a startup means that entrepreneurs should be ready to share their intellectual property rights. For example, Farminers will register intellectual property to a third company in which the fund will own 40 percent and the start-up the remaining 60 percent.

Nearly all private venture funds confine themselves to a narrow range of trendy industries: the Internet, software, mobile and cloud services. It is simpler to review such projects and they offer quick results. This predisposition, however, means that companies working in other economic segments – medicine and pharmaceuticals, for example – must rely on state financing. These start-ups can receive venture financing from four sources: Russian Venture Company’s seed investments fund, the Fund for the Promotion of Small Business in the Scientific and Technical Sphere (Bortnik Fund), the Fund for the Promotion of Venture Investments in Small Scientific and Technical Companies in Moscow and, finally, the Skolkovo Fund.

But these funds do have money to go around. In 2011, the Skolkovo Fund gave 5.8 billion rubles’ ($185 million) worth of grants to 70 innovation companies, which is a record high for a single venture fund in the history of venture investments in Russia. Yet, to get the coveted grants, candidates need to go through the tedious process of getting on the list of Skolkovo residents.

Pavel Nikonov, senior manager with ABRT fund, said that startups will have the best chance if they apply for grants to the Bortnik Fund’s annual investment program, called Start. It includes a three-year 6 million-ruble ($190,000) grant and a high, 20 percent, acceptance rate compared to only 1 percent of candidates approved by private venture funds. In 2010, 107 projects received financing out of 515 applications.

It is even easier to receive free money in Moscow. Executive Director of the Fund for the Promotion of Venture Investments Alexei Kostrov told SF that, in 2011, his organisation provided 270 million roubles in subsidies to more than 50 innovation companies and the approval ratio reached 90%. The fund also paid for 100 fellowship programmes at Cambridge.

In short, a startuper can find a place to dwell, receive money and learn the ropes. There are not many places like this yet but their numbers are growing by the year.