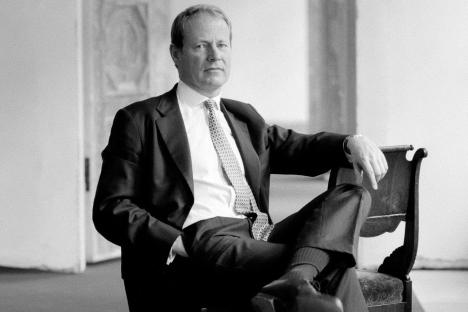 The story of Swiss financier Christopher Mouravieff-Apostol, a descendent of an illustrious Russian family who rented and renovated his ancestors’ Moscow mansion, is perhaps a first in contemporary Russian reality.

In a mansion on Starya Basmannaya Street, an elegantly dressed man is simultaneously selecting handles for enfilade doors, dealing with issues in completing the building’s renovation, and giving interviews. He describes how he first came to Russia at age 31 and was surprised to learn that everyone, even young schoolchildren, knows his last name. But it shouldn’t have come as such a surprise. After all, Christopher Mouravieff-Apostol is descended from a famous Russian noble family full of famous people.

The Mouravieff-Apostol family was at the center of Moscow cultural life in the early 19th century. Their home was a place of concerts, playreading and festivals.  But three Mouravieff-Apostol brothers were among the organizers of the 1825 Decembrist uprising, which attempted to limit the monarchy and abolish serfdom. The rebellion was crushed and its ringleaders were executed or persecuted. One of the Mouravieff-Apostol sons was executed, another committed suicide, and a third exiled to Siberia. After the 1917 revolution, the Mouravieff-Apostols left Russia, moving first to Cannes, France, and then to the shores of Lake Geneva in Switzerland, where they live now. Christopher’s father, who worked for the UN, was sent to Brazil, where he married and had children.

It seemed that the history of the Mouravieff-Apostol family and that of their native land would forever go separate ways, but in 1991, the descendents were invited to Moscow on a cultural exchange.

“I came to Moscow with my father and uncle. What we saw made a great impression on me. I understood that I was from here, that I am like these people,” Christopher said. During the trip, he visited the family mansion in Moscow for the first time. The building, then a branch of the State Historical Museum, was in poor condition. The house’s roof had collapsed and there was no money in the budget to restore it.

“When I saw what condition my ancestors’ home was in, my heart sank. Raindrops fell straight through a hole in the roof.” The 18th century mansion awaited an unenviable fate: several banks wanted to rent it, and it was almost inevitable that the building would be demolished. But then Christopher decided to restore the estate on his own.

“I spent several years trying to rent the house. It was not an easy procedure, but in 1997, then-mayor of Moscow Yury Luzhkov personally signed a document for a 25-year lease with extension rights. It was subsequently extended for another 24 years. It took several years to develop a design for the major restoration, which began in 2002.”

Professionals were invited to restore the mansion, and only historically accurate materials have been used.

“In the restoration, we sought to preserve the spirit of the building, its excellent acoustics, and the materials and technologies used in its construction. I think that you shouldn’t change what can be saved. Our house, although it has been 60 percent renovated for purely technical reasons, has retained its authenticity: even the mortar for construction work was made according to old formulas,” Christopher said.

The scrupulousness with which Christopher approached the work is striking even to the layperson. For example, the building’s missing bricks were reproduced using old methods; the building was painted with “English” paint using minerals in an 18th century formula; there was chipped pavement in the courtyard and they even managed to restore the portions of the façade facing it, clearing two centuries of soil from it.

Christopher himself admits that he owes this success to his faithful assistant, Tatiana Makeyeva, a French language teacher at Moscow State University, who became his right-hand enthusiast. He turned to her for help during the project, upon the advice of mutual friends. “I was lucky that she agreed to help me–without her, nothing would have happened,” he said.  Tatiana even completed restoration courses in order to talk with experts in the same language.

Much of the work is now coming to an end: according to plans, the house should open in March of this year as a museum, and cultural life will once again simmer in this three-story mansion, as it did many years ago. Or at least, that’s Christopher’s dream. “I want the house to come alive, to have, as it once did, exhibitions, concerts, and meetings. There are a lot of ideas: putting on plays for children, inviting guest artists, etc. A year after the opening, there will also be a Decembrist museum, which will show objects and relics provided by other museums and descendents. One of the goals of my project is to not let people forget the history of their country that’s linked to the Decembrists. I think they were honest people with a beautiful idea, real heroes. I want people to remember them. If I don’t do this, who will?”

On Dec. 14, every year descendents of the Decembrists gather at the estate to remember the uprising and those who were unafraid to speak up against serfdom in 1825. Christopher hopes to expand the gathering over time. He also plans to finish the third story, which is reserved for living space for his family – his Swiss wife, Coraline, their daughter Tatiana, and the twins Dmitry and Alexander. “While our sons are still small, it doesn’t work to have the whole family come here, although we lived here for a long time previously. I’m waiting for my wife to come and make everything to her own liking.”

Mouravieff-Apostol believes that the house will play a part in child-rearing. “I hope that my children will not only be proud to bear their name, but also speak the language of their ancestors. Our daughter studies Russian and speaks much more correctly than me. I myself started learning the language in 1991–my father never spoke to me in Russian, since he didn’t believe that we would return to Russia. I am ashamed that I still don’t speak Russian properly. I very much want to work on it, but I do not have the time.”

Christopher acknowledges that the restoration of the family mansion was the one thread that linked him to Russia. “Yes, this project could be called crazy, but it is important to me. In Switzerland, they probably think I’m crazy. There, everyone is very careful with everything about money. But, you have to agree, when someone buys a boat or an expensive car, that’s also not very profitable in financial terms but it is a great source of enjoyment. For me, my ancestral home is a real return. These are my roots, which I thought were lost forever,” he said.

Russian law has so far not sought to encourage people like Christopher. If he wants to buy the building, he will have to do so through an auction that will not take into account the several million euros he has invested in it. “The fact that I have restored it doesn’t matter. If someone offers even a kopeck more, I’ll lose everything,” he said, shaking his head.

When asked whether he wants his offspring to be connected with Russia and become citizens, Christopher answers straightforwardly: “I thought about it: Why not? Life here is much harder than I expected. Still, it’s a very interesting, talented, beautiful, strong country with much ahead of it.”