Education
Russia Beyond the Headlines 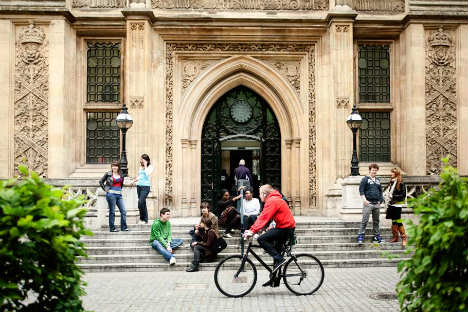 King’s College London plans to open a Russian Institute in 2013. An addition to the school's three global institutes that deal with Brazil, India, and China, it is expected to be one of the leading international centers for the study of modern Russia. Dr. Marat Shterin, Professor of Sociology and Religion at King’s College London, talked to Russia Beyond the Headlines about the college, its prospects and goals.

Russia beyond the Headlines: What was the initial motivation for launching the Russia Institute?

Marat Shterin.: King’s Russia Institute is the latest addition to our already existing three Global Institutes: Brazil, India, and China.  We obviously had the concept of BRIC in mind, which suggests that these rising economic and political powers will have profound influence on global affairs in the 21st century.  At the same time, our knowledge of their internal dynamics – their economies, politics, cultures – and their external relations remains surprisingly limited, often even stereotypical and misleading.  As our website indicates, “Russia, with its fascinating history, rich culture, complex contemporary politics, and growing economic power, has long been at the center of attention for academic, policy, business and artistic circles. But now, as openness and global integration have brought Russia more fully into the world than ever before, the opportunities to truly understand the country have never been greater.”

RBTH: Say a couple of words about the institute. What kind of activities is it going to be engaged in?

M. S.: The institute will engage in a whole range of educational, research and public activities.  It will run Masters and Doctoral programs for British and international students.  And it will be a public forum engaging all those involved in and with Russia as entrepreneurs, policy makers, diplomats, journalists, artists and other professionals, including many Russians who now live in London. At the same time, the institute will strengthen and further develop King’s partnerships with Russian academic and non-academic institutions, as engagement is the best way to understanding and mutually beneficial cooperation.

RBTH: What is the target audience of the institute? Describe a typical student.

M. S.: At King’s, we already have a considerable number of British and international students at all levels – undergraduate, masters, doctoral - who are engaged in modules related to Russia within a variety of academic disciplines, from law and business to history and arts.  Let us not forget that King’s is one of the best universities in the world [and] is located in the very heart of London, a global city with unparalleled social and cultural opportunities.  The institute will attract those who seek cutting edge and well-grounded knowledge of Russia, its institutions, its culture, and its people. This knowledge will undoubtedly contribute to their professional success as businessmen, politicians, analysts, academics, etc.  And they also enormously benefit from the opportunities to take modules on China, India, and Brazil, provided by the other institutes.

RBTH: What major fields of study do you plan to teach?

M. S.: As the youngest among the Global Institutes, we are only in the process of planning.  However, we already have a clear idea that our studies will cover a range of domestic and global issues related to the economy, civil society, responsible governance, international relations, defense, health, law, culture and religion.  I would also like to point out that, recognizing Russia’s enormous diversity, we plan a series of regional studies, including the Urals, Siberia, and Far East. We will also focus on Ukraine, Kazakhstan, and other neighboring countries, with which Russia has close historical and contemporary ties.

RBTH: What is the structure of the academic curriculum?

M. S.: This is also in the process of planning.  However, we know that our curriculum will be multi-disciplinary, involving economics, business studies, political science, history, law, etc, with core modules focusing on Russia and, as I have already mentioned, options to specialize in other countries.

RBTH: Could you give more details on Russian interests at King’s and the college’s Russia-centered activities?

M. S.: King’s has a number of academics specializing on Russia and a range of modules that involve issues related to the country.  To name but few, we have world leading experts in Russian diplomacy, security, and international relations, history and culture, health, political economy, and law; my own expertise lies in Russian religion, society, and politics. We also have established connections with academic and non-academic institutions working in Russia, for instance  the Ministry of Education and Science, the Higher School of Economics, New Eurasia Foundation and Moscow Carnegie Center.  King’s academics have carried out a major project on the mental health reform in Russia.

RBTH: What are the differences and similarities between Russia Institute and King’s Brazil, China and India Institutes?

M. S.: All four Global Institutes at King’s seek to study the emerging powers on their own terms, with the focus on these nations as 21st century powers and their potential role in the world. We hope that having the network of four institutes will enable greater understanding of the BRIC economies in a comparative context. As for the differences, each institute will develop their own Masters and Ph.D. programs, which, while focusing on contemporary issues in the global and ever-globalizing context, will have its own unique internal and regional dynamics.

RBTH: How do you select lecturers and professors? Do you cooperate with Russian and other international universities?

M. S.: King’s is one of the most international – I would say global - universities in the world and it enormously benefits from expertise of academics from dozens of countries, including from Russia.  We also have a range of connections and partnerships with universities throughout the globe, from Northern America to Australia, and from continental Europe to China.   Our selection process is similar to that of other UK universities and aims to attract the best international experts selected according to strict procedures and ultimately chosen by a panel of academic and, in certain cases, non-academic experts.

RBTH: Are there any potential candidates for the position of director?

M. S.: The post has just been advertised and we are certain that it will attract a very strong field of potential candidates.

RBTH: What kind of a job can your graduates expect?

M. S.: Although our Institutes are quite new, we have no doubt that our graduates will be highly competitive in the global job markets and in a variety of professions in business, international organizations, government, diplomacy, academia, and civil society institutions.  For example, graduates of the China Institute are now involved in public services and the private sector, including finance and investment, media and publishing; and leadership roles in international organizations and NGOs, and academic research.  As far as the India Institute is concerned, their former students now pursue both research and non-academic professional careers: in government, media and publishing, business and the corporate sector, international agencies and NGOS, and policy research. The India Institute M.A. has a specific emphasis on journalism, so for those who take that, there would be a strong media career pathway.