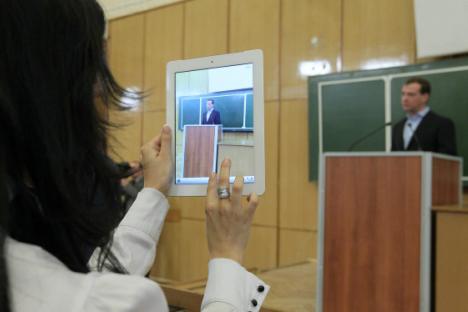 The Russian President’s second visit to the to the journalism department of Moscow State University (MGU) gave students another chance to raise some controversial questions.

On Jan. 25, Russian President Dmitry Medvedev paid a return visit to the journalism department of Moscow State University (MGU) three months after his first unannounced meeting with students there. Students had not been informed in advance of Medvedev’s trip on Oct. 20, 2011, and rumors circulated that only members of various pro-Kremlin movements were allowed to attend. Additionally, some students reported in their Twitter accounts that they were detained by the Federal Security Service, which occupied the building long before the arrival of the president. And others were barred from accessing the building to attend class.

“I think that the meeting went very well,” Vartanova said. “The fact that the president, who planned initially to talk to students for one hour and 20 minutes, spent almost two hours proves that it was interesting for him. I think the students and Dmitry Anatolyevich found a common ground.”

Security measures were firmly in place during the president’s visit. Students could access the building through two areas by showing their student IDs and passports. “We got a good shake before we got in the building,” said Daria Klimasheva, a third year journalism student. “Everybody except nine special photographers was asked to put down their cameras, even non-professional ones. Many were annoyed with this fact.”

The students’ questions for the president ranged from the recent mass protests over the elections to U.S.-Russia relations, Georgian-Russian tensions, culture and education.

“I’m sure that our country needs no revolution,” said Medvedev when asked about the possibility of a revolt or political crackdown. When asked if he was ready to be executed in case of the rebellion he added that he was ready to die for his ideals.

“Some people were just complaining about their life,” said student Daria Klimasheva. “I didn’t get a chance to ask him, but I would prefer to ask him more personal questions, something about him as a person, not him as a president”

Igor Malinin, one of the meeting’s organizers, was glad that the students were well-prepared for the meeting and weren’t afraid to ask tough questions.

For example, one student asked Medvedev about the falsifications during the Dec. 4 parliamentary elections and claimed that he had witnessed vote fraud. Yet Medvedev, in his own turn, described the elections as the most honest in the history of modern Russia.

Another question addressed Medvedev’s decision to bow out of the presidential race in favor of Prime-Minister Valdimir Putin.

“I admit that among those who came to Bolotnaya Square and Sakharov Prospect  were people who might want other political scenarios and probably my participation in the presidential elections,” Medvedev said. “And it’s normal.”

At the same time he didn't rule out the possibility of running for Russia's presidency in the future.