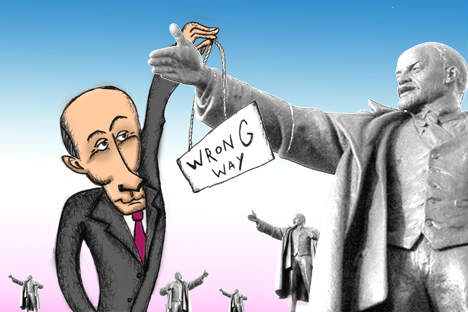 In an article published last week, Prime Minister Vladimir Putin announced the end of the post-Soviet era and called for something new. However, the presidential candidate did not specify what this something new might be. In effect, Russia’s leading politician has acknowledged that the public and political fixation on the collapse of the Soviet Union is no longer a positive, galvanizing force. Russia needs a new agenda.

The Soviet Union’s demise has been the point of departure for the Russian government in the post-Soviet period, though different governments have used the past in different ways. This began with the anti-Communism of the early 1990, when renunciation of all things Soviet served to legitimize the new authorities. However, this policy was rapidly undermined by the difficulties and setbacks of democratization and the growing discontent in society, which fueled Soviet nostalgia. The government has tried to use this nostalgia in its interests or at least to channel it in harmless ways, such as the return to Soviet aesthetics and symbols. In the 2000s the government actively revived elements of the Soviet past and periodically encouraged nostalgia to divert attention from current events. In other words, the government gained legitimacy by linking itself, whether in reality or in the popular imagination, to past glory.

The post-Soviet fixation was particularly pronounced in foreign policy. Form the early 1990s through the late 2000s Russia attempted to prove to its foreign partners that while the Soviet Union may be gone, Russia is still a key global player. It employed different methods at different times but the aim of restoring Russia’s great power status remained throughout. Russia achieved this aim, at least within the limits of what was possible, remaking Russia as a Soviet-style super power was never on the agenda. In any event, Russia reached peak political and economic power in the post-Soviet period at the end of this past decade.

There is no longer any point in appealing to the Soviet past. Russia’s Soviet-era technological capabilities have been exhausted, as numerous man-made disasters attest to. Soviet methods of resolving social problems are unacceptable today, even if they had some positive elements. The legacy of Soviet foreign policy is all but gone and the Arab Spring has swept away the last Middle East regimes that were considered Soviet allies. Finally, Soviet ideology can no longer aid Russia’s progress in any way.

Putin’s statement is an important step but now the Russian authorities must create this new reality and stop appealing to the Soviet past. Putin himself is guilty of harping on the past. Based on his past statements, you might think he is in favor of returning to the Soviet model. However, nobody in the Russian leadership has such unrealistic ambitions. Officials use pro-Soviet language due to a lack of any alternative; they still believe that the image of the lost super power can add weight to their words. The Eurasian Union proposed by Putin is a clear example of this tendency.

In effect, Putin is trying (in earnest for the first time) to set integration in the post-Soviet space on an entirely new foundation: sensible economic cooperation for the mutual benefit of its participants. European integration, as it was initially conceived, is the prototype of this project. However, speaking about the project’s prospects, Putin appeals to the Soviet economic community, creating the impression that perhaps he seeks to restore the Soviet Union. This makes his partners apprehensive and scares the rest of the world. The main challenge of the new era is to find forward-looking arguments rather than arguments rooted in the past.

Clearly, it is neither possible nor desirable to erase the past. But at some point history must cease to be a political tool and become instead an object of unbiased study. The Russian elite does itself a disservice by pedaling Soviet nostalgia because no matter how they regard the Soviet past the fact is that they are in power only as a result of the Soviet Union’s disintegration and the subsequent change in leadership. The yearning for the lost great power undermines the legitimacy of the Russian establishment that is responsible both for the Soviet Union’s demise (Russian democrats made this choice in the late 1980s) and of what has been built since then. This is why Russian officials should encourage historical optimism rather than pick at the wounds of the past. Putin has taken the first step in this direction. Now all that remains is to create the image of a better future.

Fyodor Lukyanov is Editor-in-Chief of the Russia in Global Affairs journal – the most authoritative source of expertise on Russian foreign policy and global developments.