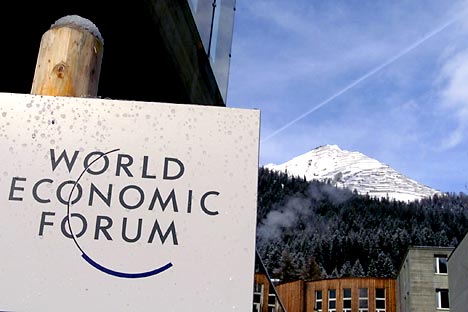 The West will take into account the experience of developing countries to come up with a new economic model during the 2012 World Economic Forum in Davos. Source: Reuters / Vostock Photo

The participants in the World Economic Forum think the global crisis will worsen and they intend to try to shape a new economic growth model based on the experience of developing economies.

The 42nd Annual World Economic Forum opened Jan. 25 in Davos, Switzerland. Participants in this year’s conference, entitled “The Great Transformation: Shaping New Models,” believe the global financial crisis will worsen until and unless a new system for economic growth is developed.

Capitalism in its present form no longer suits our world, said Klaus Schwab, the founder and executive chairman of the Davos forum. “We have failed to learn the lessons from the financial crisis of 2009. A global transformation is urgently needed, and it must start with reinstating a global sense of social responsibility.”

This year’s Davos conference will take a hard look at traditional values – from economic and social success to the role of world banks, from the ability to overcome the economic and political crisis by democratic methods to the benefits of globalization and technological progress. The answer to many of these questions will depend on the development models Asian countries have to offer. More than 10 sessions will be devoted to these countries, six of them to China.

There will also be several informal events devoted to Russia, including Sberbank and VTB Capital breakfasts with investors and a reception by the Russian Direct Investment Fund. A VTB representative noted that the breakfast format is a good one for Davos participants. “Many investors begin their day early, the main events of the forum have not yet started, so they have nothing to distract them.”

As usual, the Davos forum will be attended by heads of state and government of more than 30 countries. This year, the Russian delegation will be led by Igor Shuvalov, who will also take part in the forum. In comments on the forum, presidential economic advisor Arkady Dvorkovich noted that, in his opinion, the most important meetings at the Forum are not public speeches, but communication on the fringes of the main sessions.

The biggest Russian project represented in Davos will be the Russian Direct Investment Fund, to which the state has committed $10 billion on condition that investments are made jointly with foreigners.

Russia still has a growth potential about which other countries, for example, crisis-ridden Europe, can only dream, said Kirill Dmitriev, chief executive officer of the Russian Direct Investment Fund, who is on the Davos list of young global leaders. The outlook for Russian business is better, VTB President Kostin agrees, but the liquidity situation has worsened and Western capital markets have virtually closed down. Even so, Kostin does not think a credit crunch for the corporate sector is likely.

According to Igor Komarov, president of Russian auto giant AvtoVAZ, market growth will slow down; there are already problems with liquidity that have led to a 1 to 1.5 percent rise in interest rates. Yevgeny Fedorov, chief executive officer of EuroSibEnergo, one of Russia’s largest energy companies. “But we hope that the banking system, with government help, will adapt itself to the current conditions and bring back liquidity to the market,” Fedorov said.

Seventy per cent of global top managers are planning to change their strategies because of the dynamics of consumer demand and the economic environment. But many Russian managers interviewed by are not planning any changes in business strategy, or otherwise describe them as “adjustments.”

“Only the tactics and instruments for achieving strategic goals are being corrected in consideration of the difficult situation in the world economy,” said Kostin. Yet most Russian managers are committed to cost-cutting.

Sergei Galitsky, chief executive officer of the Magnit company believes that the crisis is mostly affecting the financial sphere rather than manufacturing.

Russian companies have their own problems, counters Basov: “The country’s perception by investors has deteriorated, costs are rising (the price of gas, electricity, fertilizer, fuel and lubricants, wages), the infrastructure is inferior and there is no protection against tariff growth.”

The largest number of Russian delegates to the Davos forum are expected to come from Skolkovo and Basic Element. Basic Element is always well represented at the forum because it is a forum strategic partner, which entitles it to a number of participants. The Davos forum has 109 partners, which buy their way in with 500,000 Swiss francs ($545,000) a year. Other Russian partners of Davos include VTB, Lukoil, Sberbank, Troika Dialog and Vimpelcom.