At odds with society’s values 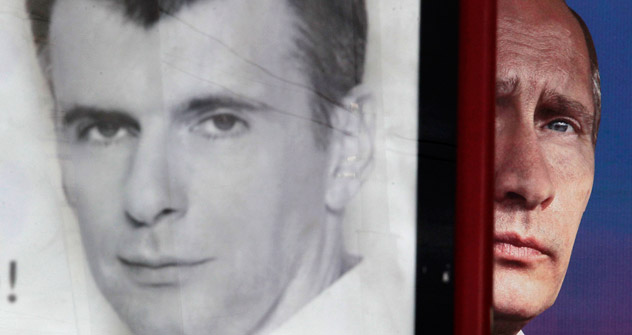 Vladimir Putin (right) is not strong enough for the advocates of an iron fist while Mikhail Prokhorov, one of his rivals in the 2012 presidential campaign, does not seem to be liberal enough for the new crop of voters. Source: AP

Sociologists have determined out what political values are most highly prized in Russian society – and few of them are embodied in Vladimir Putin.

According to sociologists, justice, legality and honesty are the features Russian society wants to see in its government. Many doubt that presidential candidate and current Prime Minister Vladimir Putin can deliver all of these, but nevertheless, his approval rate continues to grow.

According to Vladimir Petukhov, of the Sociology Institute at the Russian Academy of Sciences, the biggest demand in society is for change, meaning effective government institutions, equality under the law, moral health of society and a new, younger generation of political leaders. Petukhov believes these demands were formed in the summer and fall of 2010, when Russians witnessed the government’s inefficient handling of wildfires and man-made disasters. Over the past two years, the alienation between society and the state has increased, resulting in the desire of ordinary people to distance themselves from it.

Igor Zadorin of the TsIRKON research group says that the authorities have not responded to the evolving needs of society, rather the government is still working towards fulfilling expectations of the last decade. TsIRKON has identified five main features of an ideal government: concern for the common people, justice, legality, lack of corruption and honesty. These are precisely the qualities that present-day Russian power lacks, Zadorin says.

The demands for social justice and equality show that there remains a need in Russian society for a liberal political party, says Mikhail Mamonov of the VTsIOM polling center, but that the current crop of liberal politicians are unacceptable to most potential voters. The center’s latest forecast is that, should he be allowed to run, the Yabloko Party’s Grigory Yavlinsky would win 2.1 percent of the votes, while businessman Mikhail Prokhorov – 2.3 percent.

According to VTsIOM, most Russians prefer democracy (28 percent), followed by socialism (19 percent) and communism (8 percent). For 44 percent of Russians, democracy means “free speech, free press and religious freedom.” A separate poll shows that 34 percent of respondents believe a liberal party should focus on upholding civil rights and freedoms.

Zadorin claims that none of the candidates in the upcoming presidential election can offer a program that meets the demands of the majority. Petukhov agrees that at least Vladimir Putin cannot – he is not strong or steadfast enough for the advocates of an iron fist, but is too autocratic for the liberal-minded public.

Ratings of the candidates for Russia's 2012 presidency. Source: The data based on the preliminary polls conducted by Levada center and VTsIOM. Click to view the big image.

Even so, according to VTsIOM, Putin’s electoral rating, has gone up 10 percent since December. The latest surveys show that 52 percent of Russians plan to vote for Prime Minister Putin. The growing approval rating reflects the reaction of some Russians to the protest rallies, the fear of instability, says VTsIOM’s Deputy General Director Konstantin Abramov, commenting on the results of the poll.

Olga Zdravomyslova, a sociologist with the Gorbachev Fund, says it is too soon yet to say that Putin’s growing popularity is a trend, as VTsIOM’s findings are being challenged by other opinion studies. For example, Levada Center polls show Putin’s approval rating at 42 percent. Vladimir Putin cannot meet either the demands of the creative class for democratization or the demands of the paternalistic majority, Zdravomyslova points out. His popularity is only a result of the inability of Russian society to offer up a viable alternative.