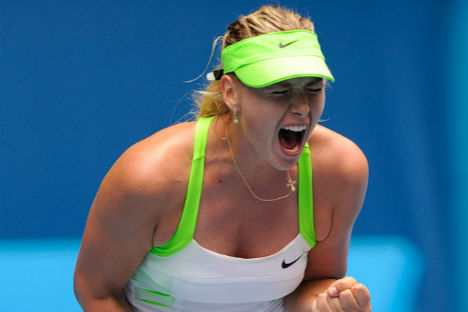 Sharapova said: “In the first set I felt like my pace hurt her a bit. I was just really aggressive. I didn't give her a chance to really step in and do what she does really well". Source: AP

Maria Sharapova said Thursday that tactics and aggression will help her to beat Victoria Azarenka in the Australian Open final.

Maria Sharapova dug deep for a 6-2, 3-6, 6-3 semifinal win over Wimbledon nemesis Petra Kvitova on Thursday to set up an Australian Open final against Victoria Azarenka.

Russia's fourth seed, looking for revenge after succumbing to the Czech in a rollercoaster Wimbledon final last year, battled through with surging ground strokes despite a misfiring serve.

Sharapova beat Petra Kvitova 6-2, 3-6, 6-4 in the semifinal, gaining revenge for her defeat to the Czech player in the Wimbledon final.

Indo-Russian cooperation and friendship on the tennis court

Sharapova said: “In the first set I felt like my pace hurt her a bit. I was just really aggressive. I didn't give her a chance to really step in and do what she does really well.

Against an opponent where you have similar games where we're both very aggressive players and pretty powerful shots, if she's dictating from the start and I'm always in the defense, points are usually going to go her way.

I try to take that away from her. In the second set it was one break and I couldn't get it back. Obviously she was up a break in the third. I managed to get it back, just hung on.”

Sharapova is seeking her first Grand Slam title for three years, and has lost to Azarenka in their last two meetings on hard courts.

Saturday’s match will be the Belarusian's first appearance in a Grand Slam final.

“I haven't had great success against [Azarenka] in the last couple of events that we've played against each other. I'd really like to change that,” Sharapova told the Australian Open official website.

“It will be important to tactically play right. She makes you hit a lot of balls and she's aggressive, as well.”

Asked if she needed an aggressive mindset for the final, Sharapova said: “If I'm playing well, that's usually kind of how my game is. If I'm playing defensive or on the defense, then my chances are pretty bad.”

Saturday’s winner will also take the world No. 1 spot, but Sharapova insisted this was not a distraction. “For me, it's more about the Grand Slam win than the No. 1 ranking. That's just always been the goal for me.”