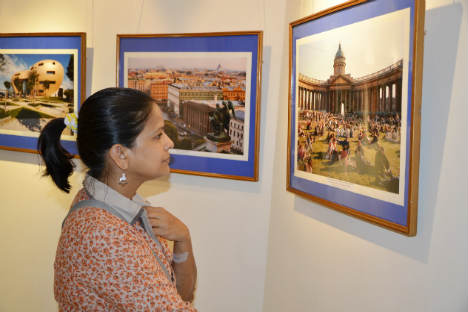 The cities are the soul of a nation. On the face of it, New Delhi and Moscow, Mumbai and St. Petersburg may not appear to have much in common, but go deeper and you will find striking cultural affinities. The twin-city relationships also promise to accelerate people-to-people camaraderie.

New Delhi and Moscow. Mumbai and St. Petersburg. Volgograd and Chennai. Thousands of miles apart, but linked in spirit, these twin-cities of India and Russia radiate a certain cultural affinity and emotional connect that’s hard to match. A photo exhibition held in New Delhi last year artfully illuminated hidden connections between iconic metropolises of the two great countries. Entitled “Views of Indian and Russian Twin-Cities,” the photo exhibition held at the Russian Centre of Science and Culture (RCSC) in New Delhi provided a bird’s eye view, perhaps that of a Siberian avian migrating between India and Russia and capturing cultural affinities between them.

Jointly organised by the RCSC and Forum of Indian Photographers and Artists (FIPA) (October 4-21, 2011), the exhibition was seen as a positive step towards promoting cultural exchange and fostering mutual understanding. “The exhibition is unique in the sense that it promotes people-to-people diplomacy between the two countries. Through the medium of photography the exhibition seeks to demonstrate the necessity of activating the tie-ups between the Indian and Russian twin-cities,” says Yelena S. Shtapkina, deputy director (Culture and Information), RCSC. "It’s a springboard for more such interactive events in the future, says Vimal Mehta, president of FIPA. The exhibition was aimed at “collecting diverse visions of the cities’ lifestyle and landmarks.”

A view of the Grand Kremlin Palace in Moscow is a powerful symbol of authority in the Russian Federation. In the exhibition, not far away, the monuments of Delhi are displayed to give a glimpse of the Indian national capital and political powerhouse. The Kremlin and the Rashtrapati Bhavan in New Delhi are matched by very few other residential premises of the Heads of the State in the world in terms of their vastness and magnificence. Both the metropolitan cities encompass testaments of the past be it Kitai Gorod or Red Fort, Lenin’s or Humayun’s Tomb, and Annunciation Cathedral or Jama Masjid. A walk down Moscow’s Stary Arbat Street past souvenir stalls, performing artists, and cafés is somewhat akin to wandering the lanes of Chandni Chowk for culinary pleasures or shopping at wholesale prices. Moscow and New Delhi are steeped in history and cultural heritage. The fame of Bolshoi Theatre is in step with New Delhi’s network of performing art centers such as Kamani Auditorium, Sri Ram Centre, and the National School of Drama.

Nightfall weaves magic around the embankments of Neva River during White Nights and to Mumbai’s Marine Drive promenade. While the authorities in St. Petersburg never need to turn the city’s streetlights on, the lights along South Mumbai’s boulevard make it resemble like a pearl necklace. Besides the nightlife the cities have a mélange of creativity, radical ideas, and legacy. St. Petersburg has a network of baroque and neoclassical architectural wonders and Mumbai showcases Art Deco riches and Neo-Gothic masterpiece, the Chhatrapati Shivaji Terminus.

Volgograd has bounced back from extensive damage during World War II and Chennai is being seen as one of the fastest growing cities in the world. Both cities have used industrial prowess as means to progress. The field for the Battle of Stalingrad is now a monument of resilience, Mamayev Kurgan which houses the mammoth Rodina Mat statue. The “Gateway to South India,” Chennai, has the floating Napier Bridge, besides the heritage buildings, as a sign of a city looking forward to growth while preserving its cultural heritage.

Building upon ongoing efforts to promote cooperation between the Altai region of Russia and Kerala, Days of Pyatigorsk festival will be organised in Thiruvananthapuram, the capital of Kerala, this year. The talks are also going on to connect Stavropol with Jaipur in Rajasthan. Mikhail Grymin, the mayor of Severodvinsk,  has expressed his desire to associate with an Indian city to India’s ambassador to Russia Ajai Malhotra. With this revival of the twin-city relationships, there is a lot of camaraderie waiting in the wings for India and Russia.