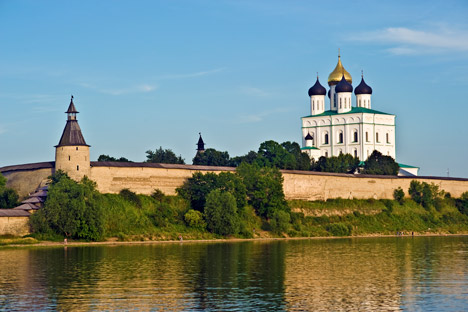 One of Russia's most ancient settlements, Pskov is also among the most picturesque of Russian cities.

One of Russia's most ancient settlements, Pskov is also among the most picturesque of Russian cities, with the walls of its medieval fortress, or krom, rising above the river called Velikaya ("great" in Russian). Situated at a naturally defensible point where the small Pskov River enters the Velikaya, the town is mentioned by some historical sources as early as 903. The memory of Princess Olga of Kiev (d. 969) is particularly revered. One of the first adherents of Christianity among the eastern Slavs, Saint Olga was born in a village near Pskov. A statue of her with her grandson Prince Vladimir was recently erected in the city center. By the 11th century, Pskov flourished as a trading point between Novgorod and Kiev, linked by a water network that formed part of a strategic trade route between the Baltic and Black Seas.

Pskov's social and cultural institutions developed parallel to those of its nominal overlord, Novgorod, located some 120 miles to the northeast. Both towns had a rudimentary democracy based on a citizens' assembly, called an or veche. Pskov never rivaled Novgorod as a commercial center, yet the self-reliant spirit of its citizens, who declared independence from Novgorod in 1348, was much in evidence during its turbulent history.

Medieval Pskov also demonstrated considerable vitality in the art and architecture of its churches. One of the earliest – and most significant – examples is the Cathedral of the Transfiguration of the Savior at the Mirozhsky Monastery, across the Velikaya River not far from the citadel. Constructed in the 12th century on the initiative of the Greek bishop Nifont, the structure and its wall paintings were completed by the time of Nifont's death in 1156. The remarkably powerful frescoes are the work of Greek masters and have been scrupulously restored as a monument of European medieval art.

Although Pskov was fortunately located in a northern area untouched by the Mongol invasions of 1237-40, the city was subjected to numerous attacks during the 13th century by the Lithuanians and the Teutonic Knights, who occupied it briefly in 1241. The town also feuded incessantly with Novgorod. A key to Pskov's survival was an exceptionally able military leader, Dovmont – a Lithuanian exile who arrived in Pskov in 1266, who expelled the local prince and successfully defended the city's interests until his death in 1299. Dovmont built a massive stone wall around an area that became known as Dovmont Town, adjacent to the Pskov citadel. Today the walls of Pskov, much decayed by the 19th century, have been partially restored and make up one of the most impressive fortresses in Russia.

During the 14th century, construction occurred both within the walled city and in outlying regions. Major resources were allotted to the construction of churches and monasteries. Pskov also developed a distinctive style of masonry architecture for the houses of prominent merchants. Most of Pskov's churches were of modest dimensions, designed with a lower level or basement used for storage by merchants and guild associations. The basic material was a local flagstone, supplemented by thin brick. To protect the relatively soft surface, the walls were covered with a thin layer of stucco that revealed the underlying texture.

Some 40 churches were built in Pskov during the 15th century, and the few that have survived in something like their original form show a distinctive style, with a the proliferation of chapels and galleries around the main square structure. One of the most striking features of these churches is the multi-leveled roof design, introduced as wood planks became the preferred roofing material. These churches typically had a belfry over the west façade. In some cases the belfries, with open gables and massive pillars, stood apart from the church.

From the late 14th through the middle of the 16th century, artists and architects from Pskov played a large role in the development of Russian artistic forms. The ability of Pskov's builders to integrate attached structures into a unified ensemble was one of their major contributions to 16th century Moscow, exemplified by St. Basil's on Red Square.

Pskov's acceptance of Muscovite rule in 1510 opened a new period in its history – one firmly linked to its position as a defensive outpost on Muscovy's northwestern border. Its greatest trial occurred in 1581-82 when it withstood a siege of several months by a large army under the command of the Polish King Stefan Batory. During the siege, the stone walls of the citadel, which had been extended in 1516 by an Italian engineer and renovated in the middle of the century, were subjected to concentrated artillery fire. Although the massive Intercession Tower in the south was eventually taken by the Poles, a secondary wooden wall enabled the defenders to repulse the attack and repair the breach.

As Russia's boundaries moved westward during the 17th century, the strategic significance of Pskov waned. With Peter the Great's conquest of Baltic territory in the early 18th century, Pskov settled into a provincial torpor. Railroad development in the late 19th century gave the town a certain regional significance, and during World War I, it served as a major command center by virtue of its rail location. Indeed, it was from his railway car on a siding in Pskov that Nicholas II signed his abdication from the throne on March 2 (15), 1917 in the face of a collapse of order in Russia's major cities (the February Revolution).

During the early Soviet period, Pskov showed modest development as a regional center. Its peace was abruptly broken with the onset of war on June 22, 1941. The initial speed of the German invasion was so great that the city was abandoned on July 9, 1941 and was not retaken until three years later, on July 23, 1944. Most of the city lay in ruins.

With the resumption of growth after the war, Pskov became a site of modern industrial development, as well as an educational and military center. In 1990, it became the seat of the Bishopric of Pskov and Velikie Luki. Of particular importance today is the city's role as a magnet for cultural tourism, centered on its renowned State Museum of Art and Architecture. With some 200,000 inhabitants, contemporary Pskov has found productive use for its magnificent cultural heritage.