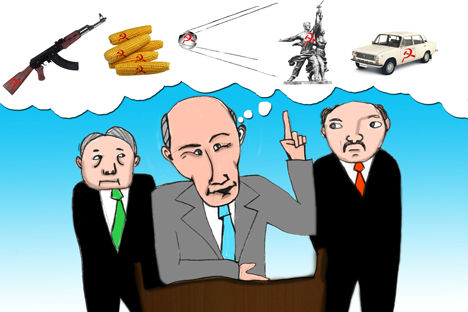 According to some political analysts Putin is pursuing a plan to revive Russia’s superpower status under the cover of the creation of the Eurasian Economic Union, out of the CIS countries, similar to the European Union. Drawing by Niyaz Karim

The Customs Union formed by the three former Soviet Republics of Russia, Belarus and Kazakhstan, moved a step forward to their complete integration with the creation of a Common Economic Space (CES) on January 1

The formal launching of the CES is expected to consolidate the economies of the three CIS (Commonwealth of Independent States) countries with the ultimate aim of transforming it into the Eurasian Economic Union (EEU), a fully fledged and closely united economic bloc on the model of the European Union (EU).

Planned to come into existence by 2015, the Eurasian Economic Union is expected to act as a link between the EU and the countries of the Asia-Pacific region.

Eurasian economic union is a barrier against China, an expert believes

Why Central Eurasia matters to India

As a whole, the documents represent a roadmap of integration processes aimed at creating the Eurasian Economic Union, which will be based on the Customs Union and Common Economic Space among the three CIS countries.

The declaration dwells on the transition from the Customs Union to the next stage of integration, the Common Economic Space, based on the WTO rules and principles and open for membership to other countries, including foreign countries.

The Treaty of the Eurasian Economic Commission envisages that it will be vested with powers to supervise the integration processes in “the Customs Union and the Common Economic Space.” The commission for the first time in the “post-Soviet history” is intended to become a supranational and neutral body for the member-states.

The commission will also have an upper tier, the EEC Council, consisting of three Deputy Prime Ministers appointed by the member-states and the apex body, the Supreme Eurasian Economic Council, represented by the heads of state and government.

Ahead of the launching of the CES on January 1, the Presidents of three countries at their summit on December 19, also approved Russian Industry and Trade Minister Viktor Khristenko as head of the Eurasian Economic Commission.

In his state-of-the-nation address to the Russian parliament on December 22, Medvedev reiterated that Russia intends to intensify economic integration in the post-Soviet space and expects the Eurasian Economic Union with Belarus and Kazakhstan to come into existence by 2015.

Recently, Russian leaders have repeatedly urged the CIS countries to join Moscow to create a Eurasian Union by further consolidating its recently formed Customs Union and the Common Economic Space with Belarus and Kazakhstan.

Russian Prime Minister Vladimir Putin offered his proposal to create a Eurasian Economic Union in an article “New Integration Project for Russia: Future Born Today” published in Russian daily newspaper Izvestia on October 3, before he announced his bid for the third term of presidency swapping his post with Medvedev.
Describing his vision in the article, Putin said he wanted to forge a Eurasian Union on the vast swath of territory with a population of about 300 million that used to be the Soviet Union as a “powerful supranational union capable of becoming one of the poles of the modern world, “and competing with “other key players and regional structures, such as the European Union, the United States, China and the Asia Pacific Economic Community.”

He called for building on the valuable “inheritance from the Soviet Union,” which he described as infrastructure, specialized production facilities, and a common linguistic, scientific and cultural space,” in pursuit of the “joint interests” of the former Soviet Republics.

Putin said the prospective Eurasian Economic Union will not be a new Soviet Union or a replacement for the CIS, but an effective link between Europe and the Asia Pacific region, an association with close coordination of the economic and currency policies.

After two decades of the collapse of the Soviet Union, Putin may not, as sometimes it is claimed, be trying to revive it, but according to some political analysts, he is pursuing a different plan -to revive Russia’s superpower status- under the cover of the creation of the Eurasian Economic Union, out of the CIS countries, similar to the European Union.

Last July, at a meeting of the three Prime Ministers of the member-countries of the Customs Union, in Moscow, Putin already urged that Russia, Belarus and Kazakhstan should start talks to create a free trade zone with the EU.

"I agree that the task is not easy, but we could solve it much more efficiently within the CES and I am sure - with more profit for Russia, Belarus and Kazakhstan - than if we did it individually," Putin said, adding talks to create a free trade zone had been launched with the European Free Trade Association, uniting Liechtenstein, Iceland, Norway and Switzerland.

So far, seven out of 11 members of the CIS, including Ukraine, Belarus, Kazakhstan, Armenia, Kyrgyzstan, Moldova and Tajikistan, have signed the free trade pact.
However, Putin faces an uphill task to put into effect his vision of the Eurasian Economic Union by 2015.

First of all, the challenges come from CIS countries. Looking back at the recent history, Moscow already has made many attempts at different times for the integration of the CIS, the Union State of Russia and Belarus, the CSTO and the EurAsEC (Russia, Belarus, Kazakhstan, Tajikistan and Kyrgyzstan).

For example, Russia and Belarus have for a second decade been discussing with relative success the creation of unified bodies of power and transition to a common currency. During this time, they have had four trade wars: two over gas, one over oil and one over dairy products.

For the creation and success of the EEU, it is necessary for Russia that other CIS countries also join it. At least, the participation of Ukraine is of paramount importance, because it not only controls the transit of Russian gas to Europe, but also with its population of 52 million and rich natural resources, has strategic access to the Black Sea.

However, Kiev does not want to join even the Customs Union, preferring to create a free trade zone with the EU.

Russia has long been urging Ukraine to join the Customs Union whose members have already agreed to introduce a single customs tariff, an equivalent of Europe's common customs tariff applied to the import of goods across external borders of the EU, tempting its neighbour with the prospect of cheaper gas supplies.

Ukraine is reluctant to become a full member, because such a deal would rule out signing a free trade agreement with the EU, and has suggested cooperating with the union under a “three plus one” plan, which would not mean full membership.

However, Russia can still make attempt to persuade Ukraine to join the Eurasian Union, since the European Union in December postponed the signing of a free trade and association agreement with Kiev over the imprisonment in Ukraine of the former Prime Minister Yulia Timoshenko and the Euro crisis has derailed Ukraine’s hopes of becoming a member of the EU in the near future.

So far, outside the CIS countries, only Vietnam and India have shown interests in the Customs Union.

Vietnamese President Nguyen Minh Triet said at a joint press conference with Medvedev in Hanoi in October that Vietnam was considering creating a free trade zone with the post-Soviet Customs Union.

India and Russia also agreed during the 17th session of India-Russia Inter-Governmental Commission on Trade, Economic, Technological, Scientific and Cultural Cooperation in November in Moscow to form a “Joint Study Group to examine the possibility of establishing a Comprehensive Economic Cooperation

Agreement with the Customs Union” as one of the four important vectors to galvanize the bilateral trade and for fructifying cooperation between the two countries.

Putin’s vision about the Eurasian Union, as he described in his article in Izvestia, not only provoked a wide-scale controversy in and outside of Russia, but also highlighted the continuing confrontation of positions on a global scale.

The reaction of the Western media over his plan, was, in general, negative and reflected an a priori hostility towards Russia. The West takes Putin’s plan as a geo-political challenge in a Cold-War style to the dominance of NATO, the IMF, the EU and to the US supremacy in the global politics.