Putin: favourite candidate to win in the first round of presidential poll 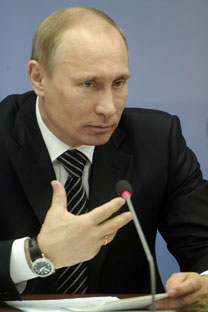 As the March 4 presidential poll gets nearer and nearer, it is increasingly becoming clear that the approval rating of Russian Prime Minister Vladimir Putin, the front-runner of the presidential race, is steadily growing and he may clinch victory in the first round of the election.

According to the latest public opinion polls, published in the last week of January, mainly two election outcome scenarios have emerged:  Putin wins in the first round of the poll or if he fails to win in the first round, he will definitely win in the second round runoff. But win he will in either of the two scenarios.

A public opinion poll published on January 27 by the state-run pollster All-Russian Public Opinion Research Centre (VTsIOM), said, Putin remains the leading candidate among the five contenders for presidency with 49 percent of respondents ready to vote for him.

Initially, two politicians attempted to get registered by Russia’s Central Election Commission as independent presidential candidates, billionaire Mikhail Prokhorov and liberal Yabloko party leader Grigory Yavlinsky. They were required under the law to collect two million signatures in their support to participate in the presidential poll but the signature sheets submitted by Yavlinsky showed 25.66 percent of them to be invalid, while the law caps the amount of invalid signatures at five percent.

According to the poll by the All-Russian Public Opinion Research Centre, Zyuganov with 11 percent is still in second place, Zhirinovsky with 9 percent is in third, followed by Mironov with 6 percent and Prokhorov with 4 percent.

Under the law, in order to avoid an embarrassing run off, Putin needs at least 50 percent of votes in the first round.

Another public opinion poll published on January 26 by the Levada Centre, an independent polling agency, said that Putin would be unable to win in the first round, as he would gain 37 percent of the vote, adding that the number of Putin’s supporters grew by 14 percent since last July.

This is also not to ignore that Putin’s rating sharply slipped down in the aftermath of the mass protests over the alleged parliamentary election fraud. But after all, Vladimir Putin still has about a month of campaign before the voters turn up at the polling booths on March 4 and he is doing everything possible to enhance his rating. Undoubtedly, it will be very difficult for him and for his campaign team to do it mainly because of the scattering of efforts, angry urban voters and the hostile stance adopted by the West towards his presidential bid.

On the other hand, encouraged by the mass protest rallies against the vote fraud slanted to favour Putin’s United Russia party in the December 4 parliamentary elections in Moscow, on Bolotnaya Square on December 10 and on Sakharov Avenue on December 24, the opposition is not in any mood to relent in its efforts to target Putin.

It has announced to hold a five-hour march and demonstration on February 4, exactly one month before presidential elections, to demand a rerun of parliamentary elections, resignation of Central Election Commission chairman Vladimir Churov, release of political prisoners and liberal electoral reforms.

The presidential candidates who support protesters’ demands are also expected to address the protest rallies. The opposition leaders have already declared that the issue of disqualifying Yavlinsky and restoring his candidacy for the presidential poll will be one of the main slogans at the mass protest rally on February 4.

Yavlinsky said he was being targeted because Yabloko party monitors had identified the most irregularities in the December parliamentary election and the Election Commission wanted to stop them taking part in the 4 March vote.

In this backdrop, a number of questions and scenarios arise which are naturally being discussed today in Russian media and in the political circles. They broadly include: Is this the equivalent of the “Arab Spring”?  Will the mass protests fizzle out or compel the government to accept the protesters’ demands, including rerun of parliamentary elections, changing the political party registration laws?  Is Russia on the brink of a regime change?

The opposition’s main dilemma is that it has so far been unable to find a leader and a common minimum programme acceptable to Putin’s foes varying from Communists to pro-business forces. Its prominent figures include veteran rabble-rousers, longtime politicians with a small following, writers, nationalists and radicals of various stripes, and a few up-and-coming leaders incapable of building an organization.

In view of this, the  scenario that may emerge after the presidential poll and Putin’s inauguration in the Kremlin, in April, will to a large extent depend on the political conduct by some of the opposition leaders, among them, anti-corruption blogger Alexei Navalny, former Finance Minister Alexei Kudrin, former Deputy Prime Minister under ex-President Boris Yeltsin and founder of the Party of People’s Freedom (PARNAS) Boris Nemtsov, leader of the left Sergei Udaltsov and the Leninist Eduard Limonov, Yavlinsky and Prokhorov, the presidential candidate who targets liberal, middle class voters but faces resentment of Russia's "oligarchs" and suspicions that his candidacy is a "Kremlin project."

Whether the opposition keeps its promise to carry on the mass protest rallies, will also depend on the stance of the US, on which Russia is keeping a wary eye, accusing Washington of interfering in its internal affairs. The US has been sharply critical of the parliamentary elections in Russia.

In his annual live question and answer session on December 15, Putin accused the US of interfering in the internal affairs of Russia, saying the mass protests after the parliamentary elections had been encouraged by Washington, in particular, by comments made by the US Secretary of State Hillary Clinton who called the parliamentary elections in Russia “neither free nor fair”.

In one of his most scathing attacks on the US on January 25 in the Siberian city of Tomsk, Putin accused Washington of intention to dominate the world, saying one of the methods of achieving it was the practice of questioning the legitimacy of internal political procedures in other countries.

Both the opposition in Russia and the US have failed to understand that Russian election aftermath is no Tahrir Square movement and the country is not headed towards an “Arab Spring.”

First of all, an “Arab Spring” is impossible in Moscow, because most Russians are not Arabs or Muslims. Those who imagine that protests against alleged vote rigging are a sprouting “Arab Spring” in Russia, do not seem to clearly understand the nature of the “Arab Spring.” The sources of the “Arab Spring” are very specific to the structure and dynamics of Arab societies, these upheavals are a derivation of a wave of resurgent Islamic radicalism.

So there is no prospect of an “Arab Spring” movement in Russia, also because Russian election protest movement is too divisive and  politically opportunistic, bringing in its fold  leaders like former Soviet President Mikhail Gorbachev, world chess champion Garry Kasparov and Ksenia Sobchak, daughter of the former mayor of St Petersburg and Putin’s late mentor Anatoly Sobchak.

This is not to suggest at all that Russia is not changing. People want more than what was achieved in the Putin-era, which included state consolidation, economic recovery and stabilization, the end of war, the separatist insurgency and terrorism in Chechnya and revival of the Russia’s superpower status. They expect a greater openness, the renewed economic confidence and elimination of rampant corruption, which political system has so far failed to deliver.

But democratic reforms take time to take roots and Russia is steadily moving ahead on the path of democracy, with no threat of any abrupt political change, either through return of dictatorship or by stirring revolution in streets.

As a result of hyped publicity and interest generated in the international media over the Russian presidential poll, Indian people are also keenly watching the campaign by Putin.

In India, Putin is seen as one of those charismatic leaders who made unique contribution to the growth of friendly ties between Russia and India. Since the launch of the strategic partnership with his visit to Delhi in 2000, it has now grown to a “special privileged strategic partnership” serving the vital interest of both countries, with increasing cooperation in all the fields, including defence, space, trade and economy, science and technology, oil and natural gas and atomic energy.

During his visit to Moscow, in December for the annual summit talks with his Russian counterpart Dmitry Medvedev, Prime Minister Manmohan Singh also called on Putin and wished him success in the presidential poll.

"I wish you success in Russian presidential elections in March next year," Singh said at a meeting with Putin at his Novo-Ogaryevo residence outside Moscow.

Singh also presented Putin a painting of tiger, which Russians consider a “symbol of strength.”