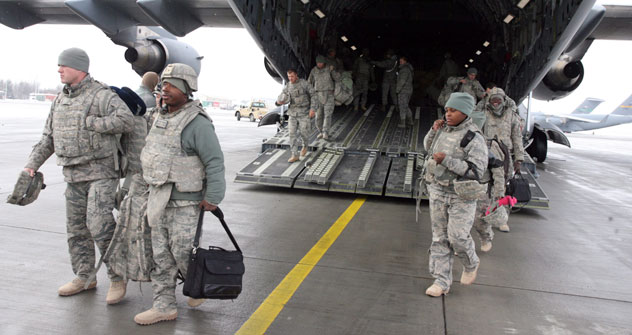 Aerial refueling of US planes over Tajik-Afghan border. Source: EPA/ITAR-TASS

Can India use its transfer station card for NATO military cargo in the American-Indo-Pakistani “big game” in Afghanistan?

While U.S. Secretary of State Hillary Clinton and her Pakistani counterpart, Hina Rabbani Khar, attempt to normalize relations between the countries after the recent American drone strikes in Pakistan, the question has arisen as to how India can become an integral member of the multi-party Afghan equation, where U.S. and NATO stakes are still very high. What does the question entail?

Winning in Afghanistan: what Russia can learn from India

The Pakistani transit routes for NATO convoys that supply military cargo to Afghanistan have been closed for two months (after an “erroneous” attack by a NATO aircraft on a Pakistani army checkpoint in the Pakistani-Afghan border region in November last year –V.S.). There is no end in sight, and everything depends on the expected “reset” of US-Pakistani relations. At the same time, Washington and Brussels boldly insist that NATO has alternative means of cargo delivery and that Pakistan is backing itself into a corner. But the events of the past two months, since the so-called southern route for NATO cargo stopped operating, demonstrate that NATO feels a “painful prick” for its successful activity in Afghanistan.

According to American news agency the Associated Press, the cost of transporting NATO goods may have increased by 512% following the closure of the Pakistani route. The monthly cost of transportation today is up to $115 million (along the so-called northern route), versus $17 million if using the transit route through Pakistan. In addition, there is both a political risk and political cost. Washington should seek support from Russia for increased use of the northern route to deliver NATO cargo. But with the current state of Russian-American relations – with Moscow directly opposing the Obama administration’s commitment to regime change in Syria and Iran, and also given the differences over the U.S. missile defense system (Moscow still does not agree with U.S. plans to build missile defense systems in Europe and believes they are directed against Russia) – it’s not that simple.

So what are Washington’s options in this situation? In our opinion, it would, of course, be preferable for the U.S. if Pakistan reopened the transit route for NATO convoys through its territory in the near future; however, this still seems to be a distant deed, in view of new strikes by U.S. drones on Pakistani territory which, as the Pakistani military commented emotionally, “As before, violates Pakistan’s sovereignty.” That’s why the question has arisen of India’s attractiveness for Washington in engaging alternative routes. If you take the word of American commentators, this question has come up recently.

According to Luis Martinez, military commentator for the channel ABC, American officials claim that much of the added cost of transporting NATO cargo comes out of rerouting cargo originally intended for Pakistan’s territory, and it is currently arriving by ship in other countries in the region for subsequent air transport to Afghanistan. For example, there is the added cost of moving some types of cargo from Pakistani ports to Indian ones, from which the goods are transported by air to Afghanistan, or transporting them further north on freight trains for subsequent transport along one of the northern way routes.

With all this, we’re experiencing déjà vu. When in 2001, U.S. forces entered Afghanistan to overthrow the Taliban regime, New Delhi zestfully offered its services as a U.S. partner in the antiterrorist coalition. As former Pakistani President General Pervez Musharraf said, the momentous offer from the Indians only spurred him to cooperate with the U.S. in Washington’s fight in Afghanistan (Islamabad could not allow their “eternal antagonist” to surpass them in cooperating with the U.S. –V.S.).

Curiously, in 2001, Washington politely declined the Indian offer, because it believed that a partnership with Pakistan would be more valuable in Afghanistan. Today, in order to force Pakistan to resume its role as a partner of the U.S., Washington seems to have “knocked on India’s door.” And New Delhi has opened its doors, ignoring the fact that its proposal was rejected in 2001. So in our opinion, there is a big game happening in the region, with the U.S., India, Pakistan, Afghanistan, and other players that have been drawn in. The cost of winning in this game is the further strengthening of a strategic partnership between Washington and New Delhi, but above all pressure on Islamabad to take steps to change its position in relation to the U.S., and to once again become a “valuable strategic ally.”

It’s noteworthy that the U.S. could use an Indian route to transport sensitive military equipment. Whatever the case, if India is in fact seen as a transit point for military supplies to Afghanistan, this will be the first time that New Delhi “will do big business” with the Atlantic community. Many Indian analysts say this would be a historical turning point in the politics of India’s cooperation with the U.S. and NATO in Afghanistan (New Delhi’s current cooperation with Kabul doesn’t count –V.S.).

So India seems to be using the current crisis in U.S.-Pakistani relations to their own advantage. And this time, New Delhi is acting very pragmatically––it waited until Washington came to them with requests, and the Indian leadership will have another chip in bargaining with Pakistan. We can only speculate about where the Indian-Pakistani-American triangle will go with the high cost of resolving the Afghan crisis. But some things can be predicted already. The first is that the government of President Asif Ali Zardari in Pakistan (with his current precarious position in the country) wishes to make concessions to Washington and, despite everything, will reopen the transit route for NATO cargo to Afghanistan via Pakistan. The Pakistani military, most of which is currently sharply opposed to amplifying India’s role in Afghan affairs, will support this. They will even put aside their strong dissatisfaction with both U.S. policy and the policy of the civilian administration in Pakistan. The second, and in our view less likely thing, is that the “thaw” begun in Pakistani-Indian relations will stop because, once again, for the Pakistani military, above all else, India is the main threat. But this is unlikely because Washington, playing on the Pakistani-Indian controversies to solve their own problems, is simultaneously pushing Pakistan to “defuse” its relations with India to ensure the support of both New Delhi and Islamabad in resolving the Afghan crisis and creating the most favorable conditions for troop withdrawal from Afghanistan. So Washington is playing high stakes in the region, but both India and Pakistan are playing the game along with them. After all, a situation may arise, purely hypothetically, where India offers its services to the U.S. in the latest peace talks with the Taliban involving, say, the Northern Alliance, with which New Delhi has long been developing a trusting relationship. But that falls within the domain of bold political predictions.