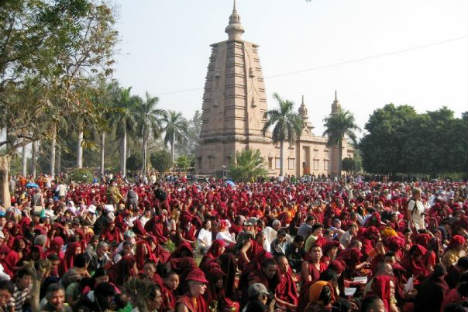 India is now looked upon as an inspiration for Buryats looking to return to being practising Buddhists. Buryat students of Buddhism study at Tibetan monastic universities and bring their knowledge back home.

In the ocean of robed monks that descend on important Buddhist sites in India, there are increasing numbers of Russian-speakers, who can easily blend in with East Asian members of the monastic order. These Russians are Buryats, an ethnic group closely related to the Mongols and inhabiting the internal Republic of Buryatia, a Trans-Siberian area that is about one and half times the size of Great Britain.

Mahayana Buddhism came to Buryatia from India via Tibet and Mongolia over 400 years ago. The Buryats, who were traditionally Shamanists, embraced the principles of the Buddha and built several towering monasteries on the vast steppes of the Siberian wilderness. While Buddhism flourished in Buryatia for over 200 years, the initiators of the Bolshevik Revolution came down hard on any kind of religious activity. It wasn’t until the collapse of the USSR that Buddhism witnessed a revival in areas such as Kalmykia, Tuva and Buryatia.

India is now looked upon as an inspiration for those in Buryatia looking to return to being practising Buddhists. Hundreds of Buryat monks were in Bodh Gaya in Bihar on New Year’s Day for the “Kaalchakra,” a mega prayer for world peace conducted by Tibetan Spiritual Leader and Nobel Peace Prize winner, the Dalai Lama. The address of the spiritual leader was delivered in Tibetan but FM band transmitters relayed simultaneous translations in several languages including Russian.

Among the 1300 Russian Buddhists who came to India for a pilgrimage around the time of the “Kaalchakra,” Tamara Sodnomova, a 61-year old doctor from the city of Ulan-Ude felt overwhelmed by her experience. “I met with something so profound it will take some time to truly understand the significance of it,” Sodnomova said. “Even though Buryats are traditionally Buddhists, a lot was lost during the 70 years of the Communist regime, and not many of us really know what Buddhism actually is... By attending such teachings, we are inspired to study the profound philosophy of the Buddhism, and learn how to apply its principles in our daily lives.”

The soft power of Buddhism from Buryatia spread far and wide across the Russian Empire. Dashi-Dorzho Itigelov, a Buryat monk who is revered by Buddhists in the country, was awarded the order of St Stanislas by Czar Nicholas II in 1917. Itigelov, who attended the tercentenary celebrations of the House of Romanov, opened the Gunzechoyney Datsan in St Petersburg, making it the first Buddhist temple in Europe.

Itigelov was believed to have reached the supreme level of practicing Buddhism and it was in 1927 that he asked to be buried, while in a state of deep meditation. His body, which was exhumed in 2002, was almost intact.

Itigelov was buried sitting in lotus posture in a pine box and kept in lama graveyard in Khukhe-Zurkhen in Buryatia. The monk wanted his body to be exhumed by other monks within several years. When the body was exhumed, scientists and pathologists said it was "in the condition of someone who had died 36 hours ago."

The body was preserved without any signs of decay with the muscles, inner tissue, skin and soft joints intact. The body was transferred to Ivolginsky datsan, which is now the most important Buddhist pilgrimage site in Russia.

While an increasing number of Buryats visit India on pilgrimages, there are several students of Buddhism that come and stay in the country for long periods in monastic universities. Several Tibetan monasteries have relocated to the south Indian state of Karnataka. It was in Karnataka, where 2 Buryat students were awarded “Geshe” degrees, the Buddhist equivalent of a PhD. The rigorous curriculum in the Tibetan language consists of memorisation of ancient texts and ritualized debate and it can take anything between 12 to 20 years to be awarded the degree. The Buryat monks obtained their doctorate after rigorous studies and research over a period of 16 years! The monks were the first Buryats to obtain the degrees after a gap of over a hundred years since the Soviet authorities frowned upon religion.

Darima Daribazaron, an ethnic Buryat who works for a software firm in Bangalore, attended both the “Kaalchakra” prayers and the convocation of the monks. “I'm very glad I could participate in this ceremony,” said Daribazaron, who is a practising Buddhist. “I hope there will be more educated monks who will bring their knowledge back home, and the spirit of Nalanda (an ancient Buddhist university) will continue - in the remote steppes of Buryatia, thousands of miles away from the ancient kingdom Magadhi in the hot plains of north India,” she said.

Buryat students looking to learn more about Buddhism will soon have another option in India. A consortium led by Singapore that includes India, China and Japan, is spending close to US$ 1 billion to revive the ancient Nalanda University. Nalanda, which was a centre of learning from the 5th century BC, will now host the post-graduate university for research in Buddhism. The revival of this great institution is likely to increase the religious and cultural exchanges and harness the relationship between Buryatia and India.

For those interested in the revival of Buddhism in Buryatia after the fall of communism, I would recommend ‘Join Me in Shambala,’ a documentary-film made by cultural anthropologist Anya Bernstein. The film is about Tibetan spiritual teacher Yeshe Lodoi Rinpoche and his disciple Tenzin, who go to Buryatia from southern India in 1993 on a quest to “re-awaken the Buddhist faith” in the republic.