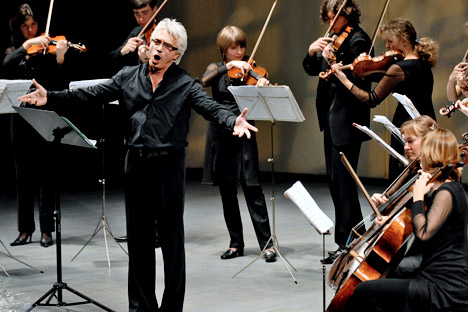 Russian star Dmitry Hvorostovsky has been a frequent performer at the Metropolitan Opera (the Met) since his debut in 1995 as Prince Yeletsky in the “Queen of Spades.” Although no “Eugene Onegin” is complete without the magnificent singer, he appears in many Verdi roles as well, appearing in “Il Trovatore” and “Simon Boccanegra” at the Met last season.

Although the singer with the trademark silver mane often sings dashing roles, his voice is neither stentorian nor brilliant. It’s not by sheer power and volume that he impresses, but by his nuanced intonations and exquisitely long phrases. Like most big opera names, Hvorostovsky has his share of concerts where he sings famous arias accompanied by an orchestra, but a large portion of his time is also spent giving recitals, performing lesser-known romances by composers such as Taneyev and Medtner. As Zachary Woolfe wrote in The New York Times, Hvorostovsky’s voice is “heavy and hooded, … it is a voice that gives the most seemingly cheerful sentiments and air of moody nostalgia.”

Hvorostovsky is just about as multi-faceted as they come. He’s frequently characterized as “smoldering” and “charismatic,” but his stage demeanor is never flashy. Despite being a ticket-selling name that crosses over into Andrea Bocelli-like amped-up pop music, he never loses the respect of both fans and critics when he sings traditional opera roles. His style of singing and voice is distinctly Russian, yet he is much appreciated in standard Italian repertoire.

In Ernani, Hvorostovsky plays the role of King Carlos of Spain, the love rival of the bandit Ernani, a former nobleman who lost his title and wealth in a civil war. King Carlos eventually relents and allows Ernani to marry Elvira, but Elvira’s uncle (and fiancé) comes between the star-crossed lovers again.

Hvorostovsky’s next performances will be held at the Met again in April and May. He will perform as Germont in “La Traviata.”