Can we overcome the perception gap? 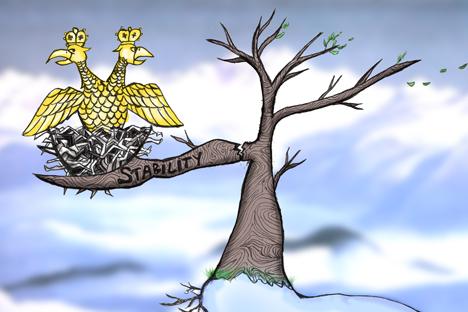 Russian businessmen in Davos were happy to talk about how Western investors have Russia all wrong, but were they really missing the point?

At the World Economic Forum in Davos last week, Russian businessmen were singing from the same hymn sheet – and one remarkably similar to the government’s. In almost identical words, the businessmen complained on international business channels such as Bloomberg and CNBC about the “perception gap” between Russian reality and Western and international views of the country.

When asked about the street protests that began after Russia’s parliamentary elections on Dec. 4, 2011, they again opined almost unanimously, that in a country of 140 million people and some 60 million voters, tens, or even hundreds of thousands of street protestors were insignificant, although some did concede that the protestors should be heard. Beyond this, however, the businessmen refrained from replying to direct questions on Prime Minister Vladimir Putin or the country’s politics, let alone criticising them. This of course, is hardly surprising given the fate of oligarchs such as Vladimir Gusinsky, Boris Berezovsky and Mikhail Khodorkovsky.

But what exactly do these businessmen mean by a “perception gap”? For one thing, the Russian government, Russian businessmen and Russian and international investment banks operating in the country have rightly noted for years that Russian assets are undervalued compared to their peers in both developed and developing markets.

The classic example is Gazprom, which a few years ago was briefly the biggest company in the world by market capitalization as commodity prices kept soaring. Some in the government and Gazprom’s top management projected that the company would soon be worth $1 trillion.

But it is also commonly acknowledged that Gazprom is used by the government to achieve both domestic and foreign policy objectives – the gas wars with Europe spring to mind. This in turn leads to the perception that Gazprom is not run on fully commercial principles, which inevitably impacts both its top and its bottom line – and in turn greatly reduces its market cap.

Similar arguments apply to Rosneft and other large companies in which the government holds majority stakes.

The government, however, refuses to acknowledge this reason for the relatively low market caps of Russian companies, preferring instead to blame alleged Western policies aimed at weakening the country.

These conspiracy theories not only play well at home by helping to shore up support, but also reduce the perceived need for change. But the refusal to find a cause closer to home means that Russian companies lose trillions in reduced market cap and other opportunities.

All this is compounded by Russia’s appalling reputation and business climate, which did not improve under Putin’s presidency. Even Russian experts rightly say that corruption and bureaucracy have become considerably worse since 2000 and now hinder the country’s development.

Russia’s politics and the constant stream of bad headlines emanating from the country send all the wrong signals to the outside world. The break-up of YUKOS and arrest of Mikhail Khodorkovsky, a number of high-profile court cases in which major western companies lost control after considerable investment, and the latest hit on a politician, banker, businessman or journalist – all combine to deter investment and drive Russian asset prices lower than they should be. Last year, the BBC World Service reported that Russian businessmen often come under heavy pressure to give up their companies. If they refuse, they not only lose their firm anyway, but end up in jail to boot. According to the BBC, around one-third of the country’s entrepreneurs are behind bars.

But instead of fixing the problem, the government and many businessmen and international investment bankers would like to ignore these negative aspects and concentrate purely on business. Indeed, they rightly point to improvements in Russia, but Moscow’s skeptical and hard-nosed international correspondents don’t buy into the investment story against the background of corruption and bureaucracy, frequently asserting instead that Russia is a kleptocracy and a (semi-) authoritarian petro-state. Indeed, on occasion they even resurrect the old dig at the Soviet Union being the Upper Volta with nuclear missiles.

One of the paradoxes of the Russian state is that while it looks strong and repressive from the outside and can easily clamp down on wayward businessmen, it is in fact too weak – and probably too unwilling – to create a positive environment for business.

Unfortunately, Russia, like the United Kingdom after World War II, has lost an empire and not yet found a role. It still suffers from imperial hubris and remains keen to impose its positive view of itself on the outside world. Russia simply does not grasp that this approach is a non-starter from the outset – and the reason its PR efforts fail miserably.

Vladimir Putin is now campaigning on a platform of stability, but neither he nor most Russians understand how fast the world is now changing and that embracing change is the only option. Those countries that do not or can not, will simply get left behind. That is the real perception gap Russian businessmen in Davos should have been talking about.