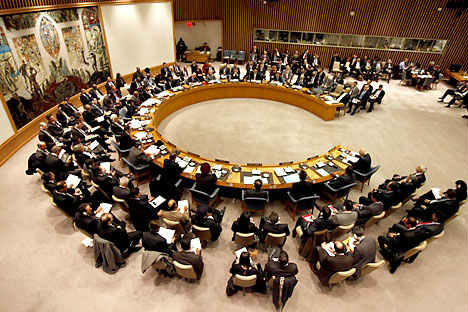 A major diplomatic battle over the fate of Syria has begun at the United Nations, with Russia and China the only permanent Security Council members challenging the UN's right to ‘meddle’ in sovereign states’ internal problems.

Proponents of the West-sponsored draft resolution are calling for Syria’s President Bashar Assad to step down, the release of all prisoners and the withdrawal of troops from Syrian cities, among other things.

Numerous accusations of crimes against its population were leveled against the Syrian regime, justifying the rallying cry of “Assad must go,” which has been voiced by Western countries and their allies for several months now.

Lavrov warns against stirring up violence

Speakers at the meeting constantly accused the Syrian regime of unconscionable violence, with the Qatari PM emphasizing that if the Syrian 'killing machine' is not stopped, it may come to commit 'crimes against humanity.'

US Secretary of State Hillary Rodham Clinton claimed that Assad’s forces ‘clearly initiate most of the attacks on civilians’ in Syria, and called for an end to Assad’s ‘brutal, failed dictatorship.’

Meanwhile, the British delegate declared that if the Assad regime does not cease its violence, the UNSC would consider 'harsher measures.'

In the hope of convincing Russia and other resolution opponents to change their minds ahead of a vote later this week, speakers supporting the draft resolution repeatedly maintained that there would be no Libya-style scenario in Syria.

“I know that some members here are concerned that we are headed toward another Libya,” Hillary Clinton said. “That is a false analogy. Syria is a unique situation that requires its own approach, tailored to the specific circumstances on the ground.”

Russia remains unconvinced and maintained its line on the issue, saying that the international community should not “meddle” in Syria's domestic conflict. Ambassador Vitaly Churkin stated that sanctions could risk heating up the conflict, and called for both sides to cease violence.

Moscow “rejects any sanction approaches, any attempts to use the Security Council instruments to fuel the conflict, to justify a military intervention,” the Russian ambassador said. “The Council cannot dictate parameters for an internal political settlement; it has no authority for it.”

China backed the belief that further sanctions would only complicate Syria's situation, with the Chinese delegate stating that the Syrian people’s request for reforms must be respected – but with the involvement of both sides in the conflict.

Russia also invited representatives of both the Syrian government and opposition to Moscow to discuss theirnational agenda without any restrictions, an offer received warmly by the Syrian government. Deputy spokesman for the US State Department Mark Toner called such a meeting less important than “to hold the regime’s feet to the fire.”

The Chief of the Arab League and the Prime Minister of Qatar briefed the Security Council on their standpoint on Syria, saying that the whole Arab world is looking forward to a clear resolution. Qatari PM Sheikh Hamad Bin Jassim added that there is no demand for regime change in Syria, as it is 'up to the Syrian people' to decide what happens next.

Syrian Ambassador Bashar Jaafari said the Arab League observers' report on Syria is part of a massive 'disinformation campaign' against the country, reminding those present that Syria had offered the observer mission an extension, while the Arab League turned the idea down.

Jaafari accused the resolution's backers of ‘aggressive interference’ in Syrian internal affairs and of pushing for colonialism's return to Syria, maintaining that Syrians are capable of dealing with their ‘decisive challenges,’ on their own.

Jacob Hornberger, the founder and president of the Future of Freedom Foundation, told that the only thing UN resolutions can do is “pour fuel onto the fire.”

“That is the whole idea of these resolutions,” he explained. The real thrust of any resolution on Syria would be regime change, he added: “It begins with sanctions. It goes into embargoes, blockades. But ultimately, the quest is to remove a dictatorship, and install a US regime even if it happens to be a dictatorship.”

And Ali Rizk, an expert on Middle Eastern affairs, believes Russia's firm stance on the issue – and its veto power in the UNSC – will keep President Bashar Assad's enemies from toppling his government.

“I think we are heading towards people taking into consideration the Russian proposal of power-sharing, with Bashar Assad staying in power,” he told.