What does a Russian soul sing about? 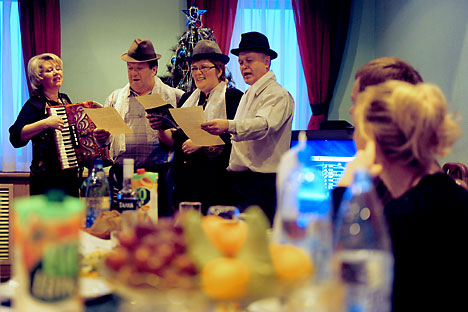 Every time Russians jump at the oppotunity to sing in a company of close friends and relatives. Source: ITAR-TASS

Russian songs are popular the world over – maybe because of their overwhelming emotional recounting of universal themes.

When Russians sing, they do so completely and without reservation. As Leo Tolstoy wrote in his epic “War and Peace,” “‘Uncle’ sang as peasants sing, with full and naive conviction.”

Most Russian songs are simultaneously sad and hopeful, and if they are actually happy, they are very happy.

The footage from a Soviet movie. The "Kalinka" song.

Many touring Russian singers are often asked to sing “Kalinka.” It is not really a folk song, even though it sounds like one. “Kalinka,” written by Ivan Larionov, dates back to the late 19th century. It mentions the bitter arrowwood berry and tells a story of a man craving a beautiful maiden’s love. It is especially popular in China.

Italians, however, love “Katyusha,” which is also called “Katarina” or “Fischia il vento” (“The Wind Whistles”). The song, written by Matvei Blanter between the World Wars, was performed for the first time in 1938. Incidentally, artillery mounts used during the Great Patriotic War (World War II) were unofficially dubbed Katyushas, which some attribute to the song’s influence. The words tell of a girl awaiting the return of her sweetheart from war. Today, the song is often performed by football fans during matches.

In Spain, you can often hear a tune very familiar for any Russian – “Podmoskovnye Vechera” (Moscow Nights) – which also dates from the Soviet era. Co-written by Vasily Solovyov-Sedoi and Mikhail Matusovsky after World War II, it affectionately describes the atmosphere of Moscow nights and a man’s unrequited love for a woman.

Other popular Russian songs include traditional Cossack ballads, which incorporate folktales, wailing, lamenting and groaning.  They are certain to feature such interjections as “O!,” “Ah!” and “Oh.” Composed by the Cossacks living along the Kuban River, such songs often narrate the stories of battles and separation. This tradition lives on today in the Kuban Cossack Host. One of the most beautiful and popular Cossack songs is “Oi, To Ne Vecher,” written in the 17th century. It tells about the prophetic dream of Stepan Razin, a Russian national hero doomed to die in battle.

The best Russian songs have eternal themes – the enigmatic Russian soul, nature, war, love. And when a Russian sings, the entire nation sings through him.