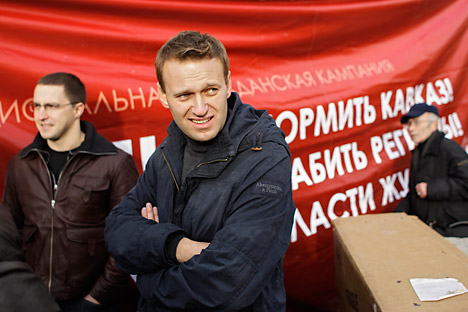 A new project of Russia's prominent anti-corruption activist Alexei Navalny, RosVybory, aims at monitoring the upcoming presidential elections. But will it be successful like Navalny's previous project Rospil?

Anti-corruption crusader Alexei Navalny has taken his lawyer’s know-how to the polls, launching his latest project, RosVybory, to recruit monitors for the March 4 presidential election.

After the success of his graftfighting RosPil, the new project will deploy election monitors to the most fraud-prone precincts, where violations were registered in the Dec. 4 parliamentary elections and where the ruling United Russia party received a suspiciously high vote.

Through RosVybory, Navalny is also recruiting lawyers and creating “mobile brigades” of volunteers to catch “carousel” voting – an illegal method where one person votes at several polling stations using a fake absentee ballot or a candidate’s agent buys a ballot from a voter, ticks his candidate and gives it to another voter to cast it in the ballot box in exchange for his ballot.

Since the law allows only candidates, parliamentary parties and the mass media to send monitors to precincts, Navalny is negotiating the participation of RosVybory volunteers with Communists, Just Russia, as well as independent candidates where municipal elections will be held alongside the presidential vote.

As of Wednesday night, 5,000 volunteers registered on the project’s website and 1,500 of them are from Moscow, RosVybory coordinator Georgy Alburov told The Moscow News. There are 97,000 precincts in Russia, 3,300 of which are in Moscow.

Alburov is certain that negotiations with the parties will be a success: “All parties want fair elections. They’re short of monitors and will be eager to take on ours.”

Alexander Lebedev, the manager of Just Russia’s Election Day project in Moscow, plans to deploy at least three monitors to each precinct.

New monitors are always welcome: “We take on all normal people that are eager to defend democracy and fair elections.”

Lebedev said that many volunteers joined his group in the wake of the December protests against vote fraud at Bolotnaya Ploshchad and Prospekt Akademika Sakharova, with 60 of them standing as candidates in municipal elections. But Lebedev added that at least 40 percent of his monitors are new. “Earlier people took this job only if they got paid. Now there are more [people] who agree to work for free.”

Monitors undergo special training and go to lectures. “The main aim of our training is to explain to monitors how to prevent a violation, not how to kick up a fuss and write a complaint – they are useless in our system,” Lebedev said.

“At lectures, we use a ballot box, telling people that at some point it’s going to be stuffed, so that they keep their eyes peeled all the time.”

Monitors are also taught to use cameras in order to record violations. Lebedev, however, does not believe that to be an effective way to challenge vote results. Only media representatives have the right to film at polling stations. In its separate instruction for the Dec. 4 elections, however, the Central Elections Commission allowed monitors to film as long as it was not with hidden cameras.

“Even the [evidence] of a media representative or [videos] from webcams will be considered by court as circumstantial evidence,” Lebedev said. “But they’ll still say that everything was filmed at rented flats.”

The number of monitors joining Just Russia may increase, given that the Central Elections Commission barred Yabloko party leader Grigory Yavlinsky from the election, citing forgeries among the 2 million signatures he had to collect to apply for registration.

“The only reason why Yavlinsky is being withdrawn from the race is the need to get rid of Yabloko monitors,” popular LiveJournal blogger Andrei Malgin wrote.

“[Yabloko] did their job better than others in the parliamentary elections,” Malgin said. “They registered more violations, summed them all up, compiled the ‘Churov list’ [of election officials caught fixing the vote] and are now fighting in the courts.”

Yabloko may still be able to send its monitors to precincts as representatives of its publication, Yabloko Rossii, party spokesman Igor Yakovlev told The Moscow News.

But Yabloko’s chances of monitoring the elections are still limited. “Even though the statuses of monitors and of representatives of the mass media are very similar, in real life the latter are more often kicked out from polling stations,” Yakovlev said.

Navalny’s RosVybory is still counting on Yabloko. It will also cooperate with the independent Golos vote monitoring association.

“They share their training materials with us, they’re a great help,” Georgy Alburov said.

Golos executive director Lilia Shibanova told The Moscow News that her association will also hold training sessions for RosVybory monitors. Alburov said his group has scheduled video training and will hold lectures and meetings with experts.

But pressure was mounting on the organization. On Tuesday, Golos was notified that its Moscow office would have its power cut off from January 25 through March 6, due to repairs. Last Monday its landlord, the Literaturnaya Gazeta publishing house, said on February 1 it would revoke the organization’s lease, previously due to expire in August.

Shibanova told The Moscow News on Thursday that following a media campaign in defense of Golos, the landlord promised to review its decision and let the organization stay in its offices until February 24. Shibanova added that they have seen no power cuts so far.