The Voice of Russia
Anastasia Kislyakova 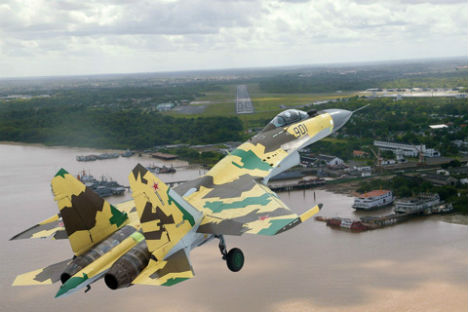 Military Space Review talks about Serial Three Su-35S Flanker-E multipurpose jet fighter, which has been successfully tested for the first time at the end of January. India is a potential export customer of the aircraft.

During the test which lasted more than two hours, the aircraft's propulsion and control systems were put through their paces and "proved to be flawless," the company said. Additional details on the initial flight test have not been disclosed.

The Su-35S is based on the earlier Su-27 but with an improved airframe, two central digital computers, advanced avionics and new radar with phased array antennas.

Audio version of the article

The closest competitor aircraft to the Su-27, which was introduced into service in 1988, is the U.S. F-15 Eagle.

Sukhoi said the Su-35S can detect aircraft out to a range of nearly 250 miles, farther than that of other combat aircraft.

Weaponry carried by the Su-35 include a 30mm cannon, laser-guided and unguided bombs, anti-radar missiles, anti-aircraft missiles and missiles for use against maritime targets.

With reduced protruding sensors and application to the fuselage of special coatings, the Flanker-E has a reduced radar signature.

The first two Su-35S planes (Serial One and Serial Two) were delivered to a Russian government testing center in August and have already performed more than 400 test flights.

The testing has involved propulsion, aircraft maneuverability, stability and control, as well as functioning of the aircraft navigation system.

Sukhoi projects the service life of the aircraft as 6,000 flight hours and a planned operational life of 30 years.

Potential export customers of the SU-35 aircraft are said to include China, India, Malaysia, Brazil and Indonesia.

Russia received the majority of the most modern fighters and 65% of the manpower. The major commands of the former Soviet VVS – the Long Range Aviation, Military Transport Aviation and Frontal Aviation were renamed, with few changes, Russian VVS commands.

However, many regiments, aircraft, and personnel were claimed by the republics they were based in, forming the core of the new republics' air forces. Some aircraft in Belarus and Ukraine (such as Tu-160s) were returned to Russia, sometimes in return for debt reductions, as well as a long range aviation division based at Dolon in Kazakhstan.

During the 1990s, the financial stringency felt throughout the armed forces made its mark on the Air Forces as well. Pilots and other personnel could sometimes not get their wages for months, and on occasion resorted to desperate measures: four MiG-31 pilots at Yelizovo in the Far East went on hunger strike in 1996 to demand back pay which was several months overdue, and the problem was only resolved by diverting unit monies intended for other tasks.

As a result of the cutbacks, infrastructure became degraded as well, and in 1998, 40% of military airfields needed repair. The situation only began to improve after Putin took power and military budgets were greatly increased.

The VVS participated in the First Chechen War (1994–1996) and the Second Chechen War (1999–2002). These campaigns also presented significant difficulties for the VVS including the terrain, lack of significant fixed targets and insurgents armed with American Stinger and Strela-2M surface-to-air missiles.

During the 1990s the Sukhoi design bureau designed a replacement bomber aircraft, the T-60S. This aircraft did not reach the production stage. A further abortive design project was the MiG 1.42.

Deputy Commander of the Russian Air Force Igor Sadofiyev said on December 1 that in the next ten years, Russia will acquire more than 1,500 new aircraft and upgrade more than 400 others. The media has mentioned these figures more than once when quoting high-ranking military officers, but now the Air Force is ready to disclose the full range of its purchases.

The modernization of obsolescent planes at a relatively modest cost makes it possibleto sharply increase the combat potential of the previous generation of aircraft. Such improvements are common practice in many national militaries, and, for its part, Russia primarily plans to upgrade its long-range aviation and cargo fleet.

The Air Force will extend the service life of the Tu-160 (Blackjack) and Tu-95 (Backgin) strategic bombers and the Tu-22M3 long-range bombers and upgrade its IL-78 (Midas) refueling tankers.

Additional improvements will be made to the A-50 "flying radar" and cargo aircraft, such as the An-124 Ruslan (Condor) and Il-76 (Candid) airlifters.

Front-line aviation will also undergo modernization, but the accent will be shifted. All things considered, the Air Force will likely discontinue the modernization of the Su-27 (Flanker) fighter we have mentioned before into its SM version after it receives 12 new aircraft of this type in 2011.

On the other hand, the Air Force plans to step up the modernization of the Su-25 (Frogfoot) assault plane, the Su-24 (Fencer) bomber, and the MIG-31 (Foxhound) interceptor. On par with transports and far-range bombers, they will form the backbone of Russia's upgraded air fleet.

The planned purchase of 1,500 new aircraft and helicopters in the next ten years has sent some shockwaves, because in the past, annual purchases were limited to 30-40 aircraft in total. Many wonder if the plan is realistic.

Ruslav Pukhov, director of the Centre for Analysis of Strategies and Technology (CAST) and one of the leading domestic military experts, explains: “Most likely, this number - 1,500 aircraft - includes not only planes and helicopters, but also drones. Many countries count their aircraft in this way, for instance, when they present information to the UN Register of Conventional Arms”.

In reality, the figure of "more than 1,500 aircraft" is most likely to include 350-400 new combat aircraft, about 100 military transports of different types, and 120-140 Yak-130 Mitten trainer aircraft. The remaining 800-900 aircraft will be helicopters and drones.

Contracts for the purchase of another 100-110 aircraft are likely to be awarded to the Sukhoi design bureau for the T-50 fifth generation fighter and other Sukhoi aircraft.

The Defense Ministry also has plans to buy a long list of helicopters - primarily the Mi-28H (Havoc) and Ka-52 Hokum B attack choppers.

By 2020, their numbers are likely to swell to 200-250 and 50-60, respectively, while different Mi-8 (Hip) versions will remain the backbone of the transport and combat fleet. Their serial production was launched in the 1960s and will continue for at least two more decades.

The biggest enigma is the drones that the Air Force is planning to buy. In fact, today the military are expected to purchase drones that have not yet been developed or are, at most, in the last stage of design. It has been previously reported that the testing of domestic drones was scheduled to start in 2011.

By 2020, Russia will have about 800 efficient combat aircraft and a total fleet numbering between 1,500 and 1,700 planes and helicopters. Including Navy aircraft, Russian military aviation will possess around 1,800-1,900 aircraft, not counting drones.