The Voice of Russia
Zakutnyaya Olga 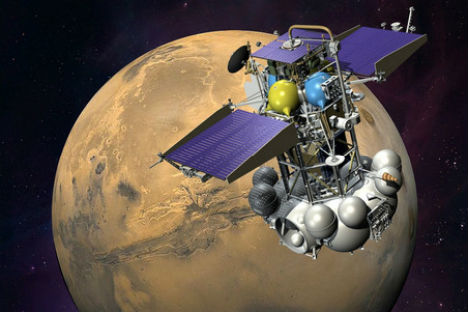 Space science in Russia seems to be in the doldrums: after the Phobos-Grunt failure the future of next planetary missions seems vague. A press conference called ‘Ambitious space projects’ was held at RIA Novosti press center on February 1st, just after the official conclusion of the special Commission for investigation of the Phobos-Grunt disaster was presented to head of Roscosmos Vladimir Popovkin.

The main cause of the disaster was computer failure due to heavy particle bombardment. Another probable reason stated by Popovkin was the use of integral parts that were not designed to be used in space.

However, answering the question of whether the scientific community believed that Phobos-Grunt was ready for launching, Professor Lev Zelenyi, director of the Space Research Institute, principal organization for scientific payload, said ‘No’. But the next astronomical window in 2013 would be inconvenient for interplanetary missions, and 2015 is too far away and a lot of the technology would need replacement.

The finale is well too known. Still, plans to conquer Phobos are by no means abandoned. Space projects are known to be repeated after failures. Such was the case with ESA’s Cluster 4-satellite mission in 2000, which initially (in 1996) perished due to failure of the new Ariane-5 booster, and NASA’s Phoenix Mars Lander which was a reincarnation of the 1999 Mars Polar Lander. Still, the question is whether the same scenario is viable for Phobos-Grunt and to what extent the project could be duplicated.

Currently, it seems like the idea of a second Phobos mission would not become outdated at least in a decade. Martian plans of Europe and the US encompass several missions that aim at Mars itself, and although exploration of Phobos is still considered, Phobos-Grunt-2 could still be the first to fulfill the task even if it’s launched in 2018. But what would be the price?

Commenting on that, Lev Zelenyi gave an estimate of 3 billion rubles, pointing out that this figure is based on current prices. ‘It would be more than 1 billion but less than 5, as many technologies are already developed’ he said.

It might be also sensible to shrink the program of the project, leaving out some of the satellite experiments and therefore reducing the weight of the spacecraft.

Whether Phobos-Grunt-2 will be built, depends largely on lunar projects and Russian participation in European ExoMars, which is in the process of being discussed by agencies’ representatives.

In the next five years Russian planetary science will be focused on lunar exploration, with two missions, Luna-Resurs (joint mission with Indian Space Research Organization) and Luna-Glob. Both will study the polar regions of the Moon that turned out to have more surprises for scientists after the discovery of probable deposits of ice or chemically bound water in the shallow layer of lunar surface.

Current dates of launches are 2013-2014 and 2014-2015 respectively. These dates were one of the reasons why Phobos-Grunt-2 was suggested to be launched in 2018 rather than 2015 — as most likely all spacecraft would be built by the Lavochkin Association and it might be implausible to run both projects at the same time.

The story of ExoMars is more complex and still far from decided. The project includes a lander and an orbiter for studying the Martian atmosphere and geology. Having been for a long time a joint ESA-NASA project, now that the US has withdrawn from the project this mission is being revised with probable participation of Russia. An obvious advantage of participating in ExoMars is an opportunity to send scientific devices to the planet, while the main disadvantage is that this project requires money, as will Phobos-Grunt-2. ExoMars was planned for 2016–2018.

Meanwhile, the Venera-D project of a long-living lander to Venus is mostly likely to be postponed until after 2020. Truly ambitious (previous Soviet landers lasted about two hours while Venera-D was intended to exceed this limit by several times), this project is for that reason highly unlikely to be run along with Martian plans.

The Phobos-Grunt disaster was on the top of the news agenda of the Russian media for several days, after every major event of this unfortunately too short of a story. The effect could hardly have been stronger, if the spacecraft left the near-Earth orbit and began its journey to Mars. Overrated attention to failures is also among the problems of Russian space. Still, not only the media are to blame.

Public and media relations in space science, as well as educational outreach, have never been among the priorities in space policy, which led to space exploration misrepresented as a victorious quest or total failure. Brilliantly exemplifying the approach, Roscosmos erased the Phobos-Grunt section on its web site a day after its fall.

However, Russian solar and geophysical research in near-Earth space in the 1990’s and in the 21st century was mostly successful, not to mention the RadioAstron space radio observatory, that has just begun its scientific program. Still, the outcome of the missions (with some exceptions) was poorly covered online and never widely used in science popularization.

‘Educational/Public Outreach’, or E/PO, is one of the mandatory parts of a project’s budget in the US, making up around 5–7 per cent of the total price. In Russia these activities are mostly volunteer-based, although the idea of publicity is gradually spreading among chief space organizations.

If Phobos-Grunt-2 is accepted for realization, internal coverage of the project would probably be even more important after the current failure. Hopefully, though, there would be no failures of the kind in the future.