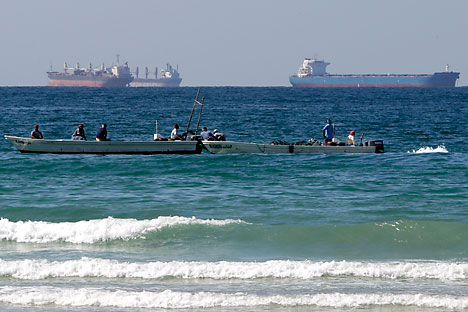 Even though there is no doubt that Washington will win in the "Iran game" in the narrow sense, the US would have to take a vast array of pertinent problems into account – expert.

The EU oil embargo recently slapped on Iran and the threats voiced by the US and other Western countries to come up with further sanctions against the country led watchers to conclude that an armed conflict between Iran and the West finally became imminent.

The first potential scenario in the context is that the current standoff would eventually escalate into a war. The US forces in the Gulf area currently number 40,000, plus 90,000 are deployed in Afghanistan, just east of Iran, and several thousands of support troops are deployed in various Asian countries. That adds up to a considerable military potential which may still fall short of what it takes to keep a lid on everything if armed hostilities break out. For example, Colin H. Kahl argues in a recent paper in Foreign Affairs that, even though “there is no doubt that Washington will win in the narrow operational sense” (1), the US would have to take a vast array of pertinent problems into account.

At the moment, maintaining the status quo is not in the US interests, holds Stratfor, a US-based global intelligence agency: “If al Assad survives and if the situation in Iraq proceeds as it has been proceeding, then Iran is creating a reality that will define the region. The United States does not have a broad and effective coalition, and certainly not one that would rally in the event of war. It has only Israel ...” (2) If the conflict with Iran takes the shape of a protracted bombing campaign and comes as a prologue to the occupation of the country, the US will need to strengthen its positions in adjacent regions, meaning that Washington will be trying to draw the Caucasian republics (Georgia, Azerbaijan) and those of Central Asia into the orbit of its policy and thus tightening the “Anaconda loop” around Russia.

An alternative scenario also deserves attention. The EU sanctions would surely hurt many of the European economies – notably, Greece, Italy, and Spain - by a ricochet. In fact, Spanish diplomacy chief José Manuel García-Margallo Y Marfil bluntly described the sanctions decision as a sacrifice (3). As for Iran, the oil blockade can cause its annual budget to contract by $15-20b, which generally should not be critical but, as the country's parliamentary elections and the 2013 presidential poll are drawing closer and the West actively props up its domestic opposition, outbreaks of unrest in Iran would quite possibly ensue. Tehran has already made it clear it would make a serious effort to find buyers for its oil export elsewhere.

China and India, Iran's respective number one and number three clients, brushed off the idea of the US-led sanctions momentarily. Japan pledged support for Washington over the matter but did not post any specific plans to reduce the volumes of oil it imports from Iran. Japan, by the way, was badly hit in 1973 when Wall Street provoked an oil crisis and the US guarantees turned hollow. Consequently, Tokyo can be expected to approach Washington's sanction suggestions with utmost caution and to ask the US for unequivocal guarantees that the White House will be unable to provide. Right now the US is courting South Korea with the aim of having it cut off the import of oil from Iran.

The opposition mounted to the plans underlying the military scenario by China, Russia, and India seems to hold the promise of an alliance of countries seeking to tame the US hegemony and raging unilateralism. Stratfor analysts have a point saying that time is not on the US side, considering that the BRICs countries have some opportunities to influence the situation in the potential conflict zone by launching joint anti-terrorism and anti-piracy maneuvers in the Arabian Sea and the Persian Gulf etc.

Inducing the regime change in Iran, which is Washington's end goal, still takes a pretext. The US has long been eying various factions in Iran in the hope to capitalize on the country's existing domestic rivalries parallel to the employment of tested color revolution techniques such as the support for the Green Movement or the establishment of a virtual embassy for Iran. Richard Sanders, a vocal critic of the US foreign policy, opined that, at least since the invasion of Mexico in the late XIX century, the US permanently relied on the mechanism of war pretext incidents to compile justifications for its military interventions (4). US arch-conservative Patrick J. Buchanan cited in his opinion piece titled “Did FDR Provoke Pearl Harbor?” the fairly common view that the US financial circles knowingly provoked the Pearl Harbor attack to drag the US into a war with the remote goal of ensuring the dollar empire's global primacy (5). The lesson to be learned from the history of the Vietnam War, namely the Gulf of Tonkin incident in which USS Maddox entered Vietnam's territorial waters and opened fire on the boats of its navy, is that the initial conflict was similarly ignited by the US intelligence community, the result being that the US Congress authorized LBJ to militarily engage Vietnam (by the way, no retribution followed in June 1967 when the Israelis attacked USS Liberty, killing 34 and wounding 172). The morally charged concepts of humanitarian interventions and war on terror had just as well been invoked to legitimize downright aggressions against Yugoslavia, Iraq, and Afghanistan.

Speaking of the current developments around the Persian Gulf, Washington's choice of pretexts for an aggression comprises at least three options, namely 1) Iran's nuclear dossier; 2) an engineered escalation in the Strait of Hormuz; 3) allegations that Iran supports international terrorism.

The US objective behind the pressure on Iran over its nuclear program - to make everybody in the world accept Washington's rules of the game – has never been deeply hidden. The abundant alarmist talk is intended to deflect attention from the simple truth that building a nuclear arsenal with the help of civilian nuclear technologies is absolutely impossible, but Matthew H. Kroenig from the Council on Foreign Relations recently went so far as to warn that Iran would some day pass its nuclear technologies to Venezuela (6). The motivation must be to somehow bundle all critics of the US foreign policy.

The Strait of Hormuz which is the maritime chokepoint of the Persian Gulf is regarded as the epicenter of the coming new war. It serves as the avenue for oil supplies from Iran, Iraq, Kuwait, Qatar, the Saudi Arabia, and the United Arab Emirates and is therefore being closely monitored by all likely parties to the conflict. According to the US Department of Energy, the 2011 oil transit via the Strait of Hormuz totaled 17 billion barrels, or roughly 20% of the world's total (7). Oil prices are projected to increase by 50% if anything disquieting happens in the Strait of Hormuz (8).

Passing through the Strait of Hormuz takes navigation across the territorial waters of Iran and Oman. Iran grants as a courtesy the right to sail across its waters based on the UN Treaty on Maritime Goods Transportation.

It must be understood in connection with Washington's recurrent statements concerning the Strait of Hormuz that in this regard the US and Iran have the same legal status as countries which penned but did not ratify the treaty, and thus the US has no moral right to references to the international law. Iran's administration stressed recently after consultations with the national legislation that Tehran would possibly subject to a revision the regulations under which foreign vessels are admitted to the Iranian territorial waters (9).

Navies are also supposed to observe certain international laws, in particular, those defining the minimal distance to be maintained to vessels of other countries. It constantly pops up in the US media that Iranian boats come riskily close to US vessels but, as watchers note, provocateurs like the CIA-sponsored separatists from Iran's Baluchistan could in some cases be pulling off the tricks in disguise.

Chances are that a part of the oil embargo plan is to make the West encounter oil supply problems and start constructing pipelines across Saudi Arabia, Bahrain, Oman, Yemen, Qatar, and Iraq as alternative routes reaching the shores of the Arabian, Red, and Mediterranean Seas. A few of these projects, the Hashan–Fujairah pipeline, for instance, are as of today in the process of being implemented. If that is the idea, the explanation behind Washington's tendency to convince its allies to create a “safer” pipeline infrastructure is straightforward. Geopolitics being an inescapable reality, it does have to be taken into account, though, that the region's countries remain locked in a variety of conflicts and, due to geographic reasons, Tehran would be a key player even if the pipelines are launched.

Since the new US military strategy implies focusing on two regions – the Greater Middle East and South East Asia - the issue of the Strait of Hormuz appears coupled to that of the Strait of Malacca which offers the shortest route for the oil supply from the Indian Ocean to China, Japan, South Korea, and the rest of South East Asia. The arrangement implicitly factors into the Asian countries' decision-making related to Iran.

The precedent of “the war on terror” - a campaign during which the US occupied under dubious pretexts Iraq and Afghanistan at the costs of thousands of lives – must also be kept in mind. Ages ago, the White House sanctioned subversive activities against various parts of the Iranian administration, including the Guardians of the Islamic Revolution. Former CIA operative Phillip Giraldi writes that the US and Israeli agents have been active in Iran for quite some time and are responsible for the epidemic of the Stuxnet virus and the series of assassinations of Iranian nuclear physicists. The groups within Iran which aligned themselves with the country's foes are the People's Mujahedin of Iran, the Baluchistan-based separatist Jundallah whose leader Abdolmajid Rigi was arrested in February, 2010 by the Iranian security forces and admitted to cooperating with the CIA, and the Kurdish Free Life of Kurdistan (10).

In essence, a war against Iran – up to date a secret war – is underway. The problem the parties involved are trying to resolve is to find a way of prevailing without entering the “hot” phase of the conflict.