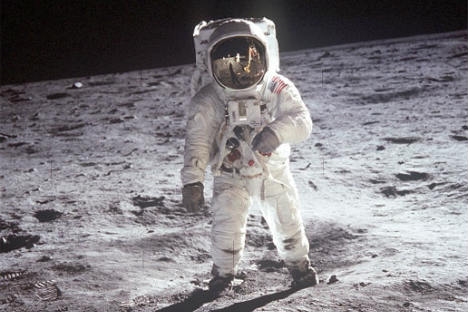 Russia had its own Moon exploration program in the late 1960s, but once Neil Armstrong and the crew of the US ship Apollo 11 got there, there was little political prestige to be gained by coming second. Source: NASA

Russia is planning to put a man on the Moon, and anyone can apply to join the crew. The Russian Space Agency, Roscosmos, may have suffered some humiliating setbacks in recent months, but it’s hitting back by aiming even higher.

“Man should return to the Moon. And not just like in 1969, to leave a mark. We can do important work there – such as building astrology labs and observing the Sun,” Vladimir Popovkin, head of Roscosmos, told the Ekho Moskvy radio station.

Popovkin’s plans are nothing if not ambitious with the first landing scheduled for 2020. Regular flights planned within five years of that, culminating in a fully-functioning scientific base complete with giant telescopes by 2030.

Roscosmos has called for volunteers, hoping that an X-factor style search will rekindle the public’s interest in space exploration. Among the requirements: a scientific or medical degree, knowledge of English and shoes no bigger than a UK size 11.

Russia had its own Moon exploration program in the late 1960s, but once Neil Armstrong and the crew of the US ship Apollo 11 got there, there was little political prestige to be gained by coming second.

In fact, both space superpowers focused elsewhere, and Moon colonization was virtually abandoned until the end of the 20th Century when new players arrived on the scene. For the budding space programs of India, China and Japan, this was an important barrier to be conquered.

Four years ago the United States proposed the creation of an International Lunar Network – a set of interconnected bases dotting the surface of the moon.

Among its scientific aims would be an attempt to understand the composition and origin of the Moon. In its landmark report, NASA called this research a “cornerstone” in trying to understand how the Earth and other planets of the Solar System were formed. NASA also says that the Moon provides a “unique” platform for astrophysics.

For its part, since 1998 the Russian Space Agency has worked on Luna Glob – a series of robotic missions to the moon, which will culminate either in the construction of an orbital space station or a base on the Moon itself.

Popovkin has recently said that Russia may co-operate with NASA and the European Space Agency and join the International Lunar Network.

“We are not just coming back to the Moon. Now, we know much more about it than during the time of the first space launches” he told Vesti Radio.

And one such breakthrough may mean that manned as well as robotic missions are feasible. In 2008, significant amounts of water were discovered on the lunar surface.

Roscosmos has even said that any technologies tested on the Moon could serve asprototypes for future manned missions to Mars.

But while space agencies around the world earn their bread by making big plans and capturing the public’s imagination, actually getting there is another matter entirely.

Although the Russian Space Agency is no longer surviving on a shoestring as in the 1990s – its budget has risen five-fold in five years – its record of success last year was less than stellar. There were five failed missions in 2011, including the much-touted Phobos-Grunt probe to Mars, which failed to get further than the Earth’s orbit before crashing back down.

In fact, it is that failure that may have sparked the current plans for space exploration. “We may need to think again about how to allocate our resources. Perhaps, we need a more specific, realistic Moon program, and do any Mars research as a part of a bigger international program,” Anatoliy Davydov, the deputy head of Roscosmos, said in the aftermath of the Phobos-Grunt failure.

Unfortunately, the two programs may be interconnected in another way – sharing the same vulnerabilities. “The design decisions used on Phobos-Grunt need to be reconsidered and significantly adjusted. Unfortunately, the same ones are used on the lunar missions. This is likely to push back the dates of any future launches, particularly of the Luna Glob modules” said Lev Zelenkin, who is closely involved with both projects.

After Popovkin’s announcement, some praised the agency’s aspiration to return to its Soviet heyday, while others were openly skeptical of whether Roscosmos is able to deliver, especially at such short notice.

Valeriy Ryumin, a former cosmonaut who traveled to space on four different missions, dismissed the project altogether. “There is nothing particularly interesting on the Moon and it has been visited by both men and machines. The only reason such a project would be of interest is if a lot of money was allocated to it,” he told the Trud newspaper.

In any event, Roscosmos faces competition in its bid to reconquer the Moon.

Not only are there rival national programs, but Space Adventures, the company set up to send space tourists to the ISS, says that it intends to launch a modified Russian ship towards the moon, and is in the process of selling two tickets for the trip at $150 million apiece.

Whether this mission, the Roscosmos program or one of the other space agencies will get there first, or indeed, at all, remains the burning question. But there is no doubt that even more than 40 years after Neil Armstrong set foot on the Moon, any return there will be hailed as a major success.