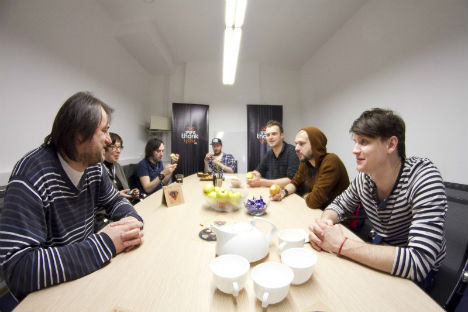 On January 25, Moscow club 16 Tons hosted a concert by Sansara, a band with an Indian name (“sansara” is Russian for “samsara,” which means the world). Inspired by the Buddhist ideals of life, the band presented its new, eponymous album that enthralled Russians. The passion for Indian names is a recent trend in Russian pop culture, but the Sansara project has been around for about 15 years. RIR spoke to Sasha Gagarin and Ivan Startsev, two of the leading lights of the new wave of indie-rock, to find out how India and its philosophical traditions have influenced the band’s music and the musicians' sense of themselves.

RIR: How do you feel about the concert?

Ivan Startsev: I loved it. It was an awesome club, an awesome audience.

RIR: Why is your band called Sansara? Why not “Moksha” or “Karma,” for instance?

Sasha Gagarin: You know, the band’s members come and go… Many people are involved. It turns outs to be a certain process of transformation. Generally speaking, I feel connected with Buddhism. India is the cradle of Buddhism –– I mean the north of the country. Some of Buddhist shrines are in Nepal. I have been to India, and that was a positive experience. I feel comfortable in Asia. I really love it. I’ve also traveled to Vietnam, Thailand, and Cambodia. The only thing that I am not comfortable with is the gap between the rich and the poor in India.

RIR: Ivan, have you ever been to India?

Ivan Startsev: Not yet, but I’d love to go. I am more of a Europe guy; I have travelled the length and breadth of it. As for Asia, I have only been to Thailand and Vladivostok, and I was born in Perm, on the border between Europe and Asia. I would also like to go on a big tour of Kazakhstan, Uzbekistan, India, Vietnam.

Sasha Gagarin: Buddhism emerged for a reason. I believe it has a lot to offer society. Why Sansara? Fifteen years ago, when the band was created, we didn’t think about the name that much. Just the concept seems to reflect reality very well. This is the reality in which we exist. A cycle of repeated transformations.

Ivan Startsev: What you name the boat is how it’s going to float. Now we see that the band’s lineup changes all the time.

Sasha Gagarin: Therefore, we transform, too.  “Samsara” is something free from negativity. I believe that to be born a human being is a great happiness. A wise man once said that being a human is like a turtle coming up from the sea and falling headlong into a life preserver. You never know where you will end up.

I have lots of friends in Yekaterinburg who follow Buddhist traditions. They keep asking me when I’ll start practicing (laughs). I took a ten-day meditation course in Cambodia. We had to meditate ten hours a day and keep silent during that time. This is called Vipasana. Also, we had to give up all of our communication devices. This gives you a new understanding of reality.

RIR: What sort of criteria do you have for selecting new band members?

Sasha Gagarin: Last year it just so happened that each of us had our own projects. In May, I got back from Cambodia and could not find musicians, but we decided not to cancel the show.

Ivan Startsev: We are good friends with our manager, Ivan. He asked us (Mars Needs Lovers) to do several remixes of some Sansara songs. We made a few and then got the idea to perform together. In the end, there were about forty people on stage today (laughs).

Sasha Gagarin: We don’t find talent in bars, like Moby does. We search via friends and the Internet.

RIR: What can you say about the new album?

Sasha Gagarin: Normally, a self-titled album is a band’s debut album or the final one, i.e. “the best.” But we try to break away from stereotypes. Or this could be the last album, who knows?

RIR: Do you think the format of albums still makes sense?

Ivan Startsev: Yes, of course. An album is like a book! Some media is outdated, though. The album is now digital. Publishers and labels are a thing of the past. They were already gone five years ago! Now we use the service ThankYou.ru, where everyone who downloads music can choose whether to pay the author –– as a “thank you.” And, you know, this has proven to be more profitable than doing it all through labels. We can interact with the audience directly, see how many people have downloaded and what they paid. And it’s nice when that money comes from the heart.

Sasha Gagarin: It’s true, our last album made more money through ThankYou.ru than the previous one that we sold through a label. Besides, an electronic album has the advantage of being available to the entire world on the release date! Also, we support pirates! They really help promote us!

Sansara - Goroda (Cities). This song and the video are a part of charity project "Dorogami dobra"(The roads of goodness)