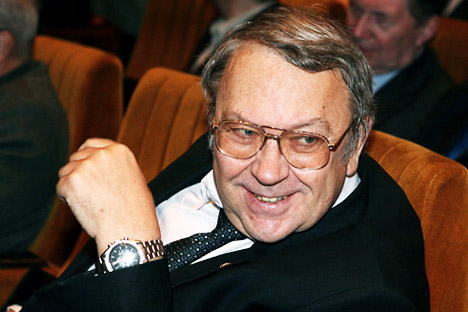 Well-known scientist, Director of the Institute of Thermal Physics of Extreme States at the United Institute of High Temperatures (UIHT) and RAS Academician Vladimir E. Fortov ponders the condition of Russian science and the causes of its stagnation. From 1996 to 2001 he was Vice President of the Russian Academy of Sciences (RAS). In August 1996, he was appointed Chairman of the RF State Committee for Science and Technologies and later – the Minister of Science and Technologies. Concurrently he had been Vice Chairman of the Russian Cabinet until March 1997 and since 2010 he has been a member of the Advisory Academic Panel of the Skolkovo Foundation.

– Do you feel any joy on the eve of your professional holiday (the Day of Russian Science is celebrated on February 8)?

– A holiday is a good occasion to review the results and a chance to look into future. I think the situation with science is straightening out. Financing has been increased compared to previous years. But now it is important for all lines of science – academic, university and applied – to be coherent and mindful of their particular place in the division of labor. Hopefully the situation will soon improve remarkably. Young people now flock to science, though we have not been able to stop the “brain drain.” The problems of salaries, housing and pensions are also very acute. In the near term we should try to overcome the consequences of all the perestroika blows in order not to lose the valuable and top-class legacy Russia retains nowadays.

–What is the valuable legacy we still have, as you see it?

– We still have reputable scientific schools and people working at the international level. They must share their knowledge with youth. I believe this must be a well-organized process and the researcher’s labor ought to be more effective.

There are certain external factors, such as insufficient financing and the lack of understanding of motivation and nature of scientific research on the part of public officials, but our scientists should be able to explain their needs. And there is another defect that could be easily rectified in case of adequate political will – I mean the growing bureaucratization of science.

It’s hard to work not only because of objective difficulties in Russia, but also because we are imposed senseless bureaucratic ideas, “innovations” which only obstruct science and do not benefit it. Bureaucracy is the “cancer” of our science.

– What bureaucrats stand in the way: those at the government level or those who function within the science?

– I have no doubt that the authorities would like to give green light for top-notch national research and develop it, but they need to maintain closer cooperation with world-class scientists rather than bureaucrats. The recipe is simple: do not turn your back on the working researcher and such researchers are in the majority at RAS.

–Will Skolkovo be able to buttress national science?

– Sure, I think this is a step in the right direction.

– But many scientists criticize the Skolkovo project and argue that this money should better be used to back the long functioning research centers – Pushchino, Dubna, Chernogolovka and others.

– They do not interfere with one another.

– Why do American and European researchers make so many exciting discoveries and work so fast, unlike our national scientists?

– Bureaucracy is again to blame as well as bureaucratic laws, such as the notorious federal law No. 94 on government procurement (in the opinion of many scientists it is absolutely inappropriate as far as the procurement of equipment and expandable materials is concerned as it restrains the spending of any off-budget funds, including those invested by commercial firms – editor). I repeatedly proved to high-ranked public officials that this law should be revoked. But then a couple of years pass by and the law is not repealed and continues to be a stumbling block or log lying in the way of our scientists.

– Do you think science will flourish after the salaries of all researchers are raised?

– Researchers should get decent wages. It’s sad to hear bureaucratic advice to hungry post-graduate students: “You can make your living unloading railway cars.” This is rather shallow understanding of the nature of scientific creativity. Young post graduates should work day and night in science without any diversion.

– Is this not a shame that physicists Novoselov and Geim became Nobel Prize winners, having left Russia for the U.K.? And they are not going to come back.

– This is our problem, not theirs. I know them both. They are superb scientists whose opinion should be heeded. They are driven by keen interest in research rather than money. They are creative people and they are not going to come back because in this country they won’t be given adequate opportunities for research work. In this sense we are not competitive and our current task is to become competitive.

– You said that research staff is the only asset left in science. But these are mainly people of advanced age.

– No, there are some young clever fellows.

– What scientific achievements of Russia and the USSR make you feel proud?

– This country has always boasted of advanced science backed by the state. It was our top priority and business card. It will take me a long time to list our achievements, but I’d rather abstain from trivial statements.

– Shall we aspire for the heights of former Soviet science or reach out still higher for the American level?

– There are no such things as American or Soviet science; there is global science. But scientists working in a particular country achieve success. We needn’t aspire for Soviet science and look into the past. We just need to analyze the mechanisms of science financing in those days and try to learn a lesson.

– What could be borrowed from those days?

– The attitude to the Russian Academy of Science, then the Academy of the USSR – this was elite.

– What disappoints you in today’s Russian science?

– It’s too late for me to get disappointed for I am not a young man. I believe scientists nowadays should be more active and propose new approaches to science organization. Regrettably, science today does not come out with many constructive proposals.

– Do you feel ashamed of the failure of Phobos-Grunt program?

– No, I don’t, because I understand that mistakes are inevitable when the matter concerns novel and sophisticated technologies. Not a single nation or person can make anything new without first making mistakes. Academician Lev Artsimovich once said, “A person who never makes mistakes should not be praised as much as the one who does, for if a person makes mistakes this means that he is pushing the boundaries of his capabilities.” You cannot become a good bike rider unless you fall at least once to the ground. If a person has not failed at least on one occasion this means he or she is frightful, spares his or her strength, and does not aspire for perfection.