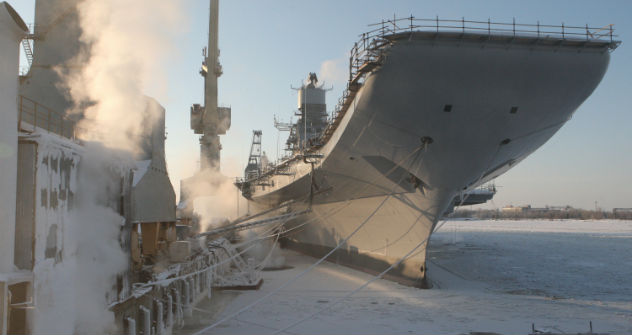 The modernisation of INS Vikramaditya for the Indian Navy at the Sevmash shipyard has moved into the last stage. The picture shows the aircraft-carrier parked on the frozen sea. Source: RIA Novosti

Russia is fast-tracking port trials and putting finishing touches to INS Vikramaditya and hopes it will be the pride of the Indian Navy.

The long wait for a cutting-edge aircraft carrier for the Indian Navy is nearing its end. The modernisation of INS Vikramaditya at the Sevmash shipyard in Severodvinsk has moved into the final stage. Come spring, all the vessel’s systems will be going through extensive testing. By the end of the year, the vessel will be handed over to the Indian Navy.

The most challenging stage will be headed by I rank Captain Srinivas Kudravalli, the Indian Navy’s new chief observer, who has succeeded I rank Captain Rajaram Swaminathan. Capt. Kudravalli is no stranger to Sevmash. When serving as a II rank captain, he worked in the group that surveyed the reconstruction and modernisation of the aircraft carrier from May 2005 to April 2008. Even after going back to India, he kept very close track of the reconstruction process.

“I am happy to come back to Russia and work on the aircraft carrier,” Kudravalli said after arriving in Russia. “I personally believe that you are on schedule. What’s most important today is that the boat is suitable for living, that the premises are prepared. A lot, of course, will hinge on how the trial runs turn out. However, I am very confident that we will have met the deadline and that this will be a great vessel for the Indian Navy.”

Indian Navy to get INS Vikramaditya on Dec 4, no extension of deadline

INS Vikramaditya aircraft carrier will be handed over to India on December 4. Sergei Chemezov, the general director of Russian Technologies, has ruled out any further delay. “Extending the deadline is not an option. We are obligated to finish the aircraft carrier by the end of the year,” he said. Russia and India signed an agreement in New Delhi in 2004 that provided for Admiral Gorshkov Russian aircraft carrier to be handed over to India free of charge, on the condition that India modernises the vessel at the Sevmash plant and has a Russian production air task force outfit it. Russia also agreed to train 1,500 Indian crew for the aircraft carrier and provide for the infrastructure to base the vessel in the Indian Ocean. The contract initially was estimated to be worth $1.5 billion dollars: 974 million for restoring its technical readiness and modernising it, and another $530 million for delivering 16 MiG-29K fighter jets and Ka-31 and Ka-27 anti-submarine helicopters. The work on retooling and modernising the vessel into a full-fledged aircraft carrier was supposed to be finished in 2008. However, the contract deadline was extended as Russia said that additional funds were needed to pay for modernising the vessel. During his visit to India on March 12, 2010, Russian Prime Minister Vladimir Putin signed a supplemental agreement for amending the cost of the reconstruction and modernisation of the Vikramaditya aircraft carrier. India now estimates the contract at $2.33 billion. The vessel is expected to be able to serve 30 years.

Port trial runs began in March last year. “These trial runs held by the port are intended to prepare the vessel’s systems and equipments for factory performance tests, when the aircraft will set sail,” Sevmash’s administration told Rossiyskaya Gazeta. Last year, the vessel was outfitted with cutting-edge equipment, tools and had its cable connections tested. “These, at India’s adamant request, were virtually replaced on the entire vessel,” said Sergei Novosyolov, the deputy general director of Sevmash. “This involved many kilometres and months of intense, painstaking labour.” The performance of individual units and mechanisms has already been verified and confirmed. It will be followed by the universal tests on the vessel’s main systems in different modes.

The most difficult and important tests concern the chief power unit. The second challenge is to check the electronic warfare systems, which include Indian-made ones, along with aviation and technical capabilities. When the vessel finally sets sail, interaction controls on the aircraft carrier and its planes will be refined. Indian officers live in Severodvinsk with their families. Two apartment buildings were refurbished to accommodate them. Indian folk songs have become a must on all festive occasions at the plant. All residents of Severodvinsk enjoy colourful Indian costumes and vivid dances.

The members of the observation group have changed several times since 2004. The contracts are signed for two or three years and then, a new group of officers comes to Severodvinsk to supervise the repairs and upgrade of the aircraft carrier.

“We manage to establish very productive relations with all the officers from the Observation Group,” says Sevmash Deputy General Director for military and technical cooperation Sergei Novosyolov. “The officers are experienced specialists, proficient in ship repairs and shipbuilding. They learn a lot here but we, too, learn a lot from them. Indian specialists are distinguished by their stringency. They go deeply into every detail and ask us to explain everything that is not clear. It's especially important and rewarding that all issues are resolved peacefully, with no serious conflicts. We have a common goal. The aircraft carrier must become the flagship of the Indian Navy, the pride of the Indian fleet.”

The first scheduled training for Indian Navy officers began in 2011 for serving as a part of the Vikramaditya crew. Training was organised in two stages, with the Indian Navy officers taking theoretical classes in St. Petersburg at the Naval Academy and then going through hands-on training at the Sevmash plant, where they studied the aircraft carrier’s equipment that they are going to work with.

Officers from the electrical and mechanical combat unit were being awarded their special certificates from the Russian Ministry of Defence. Another group numbering 112 people has arrived for training following the first group of 152 officers. Roughly more than 1,000 Indian military servants from the Vikramaditya crew will go through different training programmes in Russia.