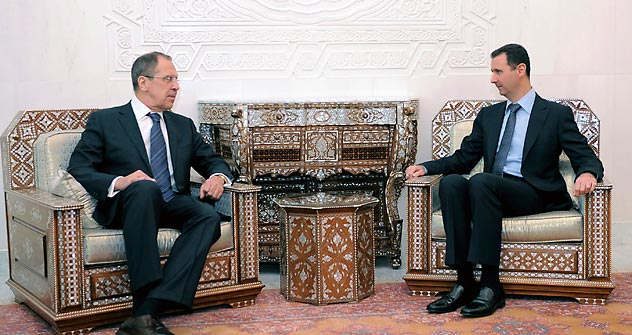 While Russia ultimately thwarted the Western game-plan of repeating the “Libyan scenario” in Syria by using its veto power to draft resolution presented by Morocco in the UN Security Council on February 4, calling on Syrian President Bashar al-Assad to step down, India, with other 12 members of the Security Council voted in favour of the resolution.

This was the second time that Russia and China carried out their “double veto” after the first one on October 5, last year, on a UN Security Council resolution threatening sanctions against Syria. Then, in contrast to voting on February 4 in the Security Council, India had abstained.

Drafted by the European members of the Security Council and supported by the US, the resolution stipulated that Assad regime should face the possibility of tough sanctions if it fails to stop its crackdown on opposition within 30 days of the adoption of the resolution, which was rejected by a 9-2 vote, with four abstentions, including India, South Africa, Brazil and Lebanon.

The resolution before the Security Council “does not condemn the violence perpetrated by the Syrian opposition. Nor does it place any responsibility on the opposition to abjure violence and engage with the Syrian authorities for redressal of their grievances through a peaceful political process,” India’s Permanent Representative to the UN Hardeep Puri said, explaining India’s decision to abstain from voting on the resolution.

However, this time during the voting on February 4, India’s breaking rank with Russia and siding with Arab League, the US and European countries, is being seen here by many political observers as a measure of divergence in policy in the region between Russia and India.

“We thought we had a consensus text” and that “everyone was agreed,” Bloomberg news agency quoted Puri as saying in an interview after the recent voting in the Security Council. The Russians wanted “another three days time but with the spiraling violence the Council was not in the mood to countenance delayed actions,” he said.

“The draft resolution that was put to a vote did not reflect Syria’s realities well enough and sent conflicting signals to the political forces in Syria.” Russian ambassador to UN Vitaly Churkin said after the Security Council vote, adding it targeted Assad’s government but contained no measures against rebel armed groups.

On Monday, Russian Foreign Minister Sergei Lavrov in Moscow defended Russia’s veto rejecting the UN resolution condemning the violent crackdown in Syria, saying the UN Security Council was “too hasty” in putting it to a vote.
“Nothing would have changed if they had waited three days,” Lavrov told reporters after talks with Bahrain’s Foreign Minister.
Lavrov and Fradkov are due to hold talks with Assad in Damascus to persuade him to launch democratic reforms to stabilize the situation in the riot-hit country.

Lavrov dismissed these criticisms, saying the Security Council members were seeking to “blame the unrest on somebody for what is happening than to reach a consensus in the Security Council, which was completely realistic.” He also accused “interested parties” of trying to topple Assad's regime by encouraging the activities of armed groups and supplying them with weapons.

Lavrov expressed “surprise” at the Council’s rejection of the Russian-proposed amendments to the text, adding, however, that Russia continued to support the Arab League’s efforts to stop violence in Syria. He said he had on February 4 sent Russian amendments to the draft resolution to Clinton and Churkin so that all partners could get familiarized with them.

Although UN Security Council diplomats had toned down the latest draft in an apparent move to overcome Russia’s opposition, Lavrov said the Morocco-submitted draft resolution was “unilateral.” Lavrov said the draft resolution contained a demand that all Assad’s forces should withdraw from cities and towns. “This phrase, without being linked to a simultaneous termination of violence on the part of armed extremist groups, is absolutely provocative, as no President with self-respect, no matter how treated, will agree to surrender inhabited localities to armed extremists without resistance,” he said. “Such a resolution would have meant the Security Council was taking the side of one participant in a civil war,” Lavrov said.

According to the UN, at least 5,400 people have been killed in the Syrian government's 10-month crackdown on protesters. Syrian authorities blame the violence on armed gangs affiliated with al-Qaida.

Some Western countries have been trying to persuade Russia to support a resolution effectively authorizing a military operation, but it has repeatedly claimed that the Western drive for a stronger crackdown on Syria is preparation for a “Libyan scenario.”
In Libya, rebels ousted and killed long-time Libyan ruler Muammar Gaddafi in October after months-long military standoff in which they received assistance from NATO forces. Russia, one of President Assad’s firm supporters during the uprising against his regime, had already indicated last week that it would veto the draft resolution calling on Assad to step down.

In this backdrop, the question naturally arises whether India’s voting in favour of the Arab League-backed resolution in the Security Council was contradictory to its previous abstention during the voting in October? Should India have abstained again during the voting in view of the explanation given by Russia on the situation in Syria and the concerned resolution in Security Council? Has India fallen apart from Russia, on the issue in the light of the fact that till very recently the two countries had similar or identical views on the developments in Syria?

In November during the visit of Indian External Affairs Minister S.M. Krishna in Moscow, the two countries slammed outside interference in Syrian internal affairs, urging all parties to immediately stop violence in the country. “India does not believe in reordering society from outside,” Krishna said reiterating Indian position on Syria at a joint press conference after his bilateral talks with his Russian counterpart Lavrov. "Violence in Syria must stop - whatever its origin," Lavrov said in his response, adding "Violence in Syria originates not only from government structures as more and more weapons are being smuggled in from neighboring countries."

Quite obviously, in a change from its previous stand of abstaining during the voting in the Security Council in October, India came out in support of the Morocco-submitted resolution, which called for a “transition to a democratic, plural political system,” withdrawal of Syrian military and armed forces from cities and towns, and release of those “detained arbitrarily.” Puri explained why India supported the resolution: “Our support for the resolution is in accordance with our support for the efforts by the Arab League for a peaceful resolution of the crisis through a Syrian-led inclusive political process,” he said at the Security Council.

He also expressed India’s concern over the present situation in Syria that has resulted in the deaths of thousands of civilians and security forces personnel over the last ten months. “Therefore, since the beginning of the protest, we have called for a peaceful and inclusive political process to address the grievances of all sections of Syrian society,” he said, adding “We strongly condemn all violence, irrespective of whoever the perpetrators are. We also condemn all violations of human rights.”

In fact, it is not difficult to see that the use of “double veto” by Russia and China on Syrian resolution in the Security Council on February 4, was motivated by deep distrust of Moscow and Beijing. They did not want to be taken for a ride this time by the Council's resolutions which did not authorize the use of force, but the force was used by the Western powers in order to get rid of the “inconvenient regimes” in Iraq and Libya.

“Then you will start telling what King needs to resign and what Prime Minister needs to step down. This is not the business of the Security Council,” Churkin remarked on January 31, justifying Russia’s suspicions of Western plan for regime change in Syria.
"The United States and its NATO allies want to exploit the situation that arose in the spring of 2011 in the Arab world with the aim of getting rid of Arab regimes it dislikes," former Russian Prime Minister and a Middle East expert Yevgeny Primakov wrote in an article published in the government-controlled Russian daily Rossiiskaya Gazeta on Monday.

Primakov defended the veto, saying Washington was seeking to oust Iranian ally Assad to increase its influence in the Arab world and isolate Tehran, which the United States suspects is seeking to develop nuclear weapons.
"Syria has become a victim for the most part because it is close to Iran. The removal from power of the current regime is part of a plan to isolate Iran," he said.