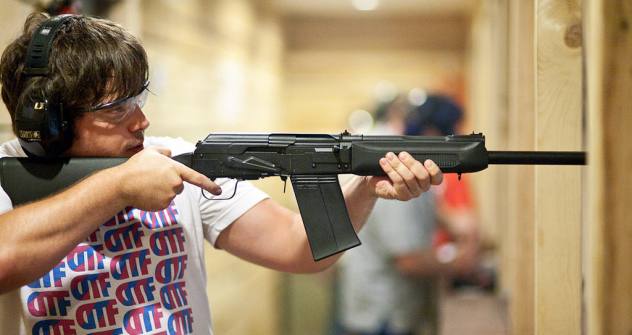 American police units are going to use semi-automatic Saiga 12 shotguns made by Russian producers. The Saiga 7.62 carbine is the civilian version of the Kalashnikov. Source: Chad Lunn / flickr.com

Deal between the Izhmash factory and American police departments will increase the presence of Russian-made weapons in the United States.

The Izhmash firearms plant has signed a new contract to supply smooth-bore semi-automatic 12-caliber magazine-fed Saiga 12 rifles for American police units. The contract was signed during the Shot Show, the largest shooting and outdoor trade show in the world. This year’s conference was held in Las Vegas Jan. 17-20. The deal capped a year of intense negotiations between Izhmash and U.S. police departments. Izhmash has not revealed the sum of the contract or the number of weapons to be delivered to the U.S.

The main advantages of the Saiga-12 shotgun, according to Kuzyuk, are its reliability; rapid-fire capacity and quick magazine change; the quality of the barrel, which is constructed with cold forging technology; and application of military strength standards. It also allows for the use of different kinds of ammunition in the same magazine, including bullets, shrapnel, shot and non-lethal bullets. Rifles produced by the competition, when used in this way, “are likely to have problems with reliability,” said Kuzyuk, whereas truly multipurpose rifles from foreign manufacturers are much more expensive.

Kuzyuk noted that use of Izhmash products by police will likely increase the demand for the factory’s weapons on the civilian small arms market in the United States. The Saiga 7.62 rifle, which is basically the civilian version of the Kalashnikov, and the Saiga 12 are already available.

Izhmash also held talks with buyers from other markets during the Shot Show. Izhmash selected the Russian Weapon Company as its exclusive importer into the U.S. and the Fime Group as its partner for manufacturing classical weapons models. The parties have agreed the supply terms, the quantities and the strategy for promoting Izhmash weapons in the United States.

Central American countries, which until recently could only place orders through middlemen in the United States, have also shown a great interest in Izhmash weapons. Preliminary direct orders for sports and hunting weapons to Guatemala, Jamaica and other Caribbean countries have been received. So far, Izhmash has been selling “small quantities of product” in Latin America, but Kuzyuk said it hopes to expand its presence there.