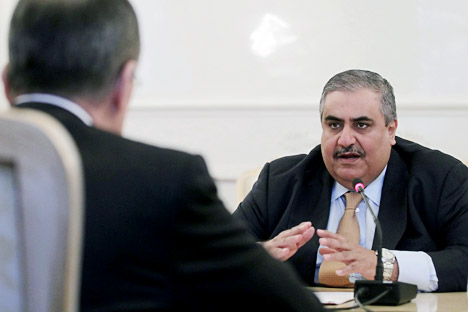 "In global politics the cries for battle never stop and they will not stop in the near future, leaving the Persian Gulf region unstable due to interference on behalf of various forces". His Excellency Sheikh Khalid bin Ahmed bin Mohammed Al Khalifa, the Minister for Foreign Affairs in the Kingdom of Bahrain, discussed with RT.com how to stem the bloodshed in Syria, foreign relations among the Persian Gulf countries and development of nuclear energy and human rights institutions in the region.

RT: Is there anything you would like to say to the Russian authorities about their position on the Syrian issue?

Sheikh Khalid bin Ahmed bin Mohammed Al Khalifa: The situation in Syria is both difficult and dangerous, not just for Syrians but for all Arab people, everyone who wants to see peace and stability in the region. The initiative put forward by Arab nations was clear. It was approved by Syria. The only question remaining is whether it will be implemented properly. We have sent our observers there and they were in danger, unable to fulfill their mission, but their reports do indicate that the situation is extremely dire. The materials served to us by the head of the observers’ mission and what he reported to the Arab League differs from what we heard from other observers. We agree with the Syrian authorities that foreign military intervention would not be tolerable. We don’t want to see that happen and we do not support calls for it. Not a single country in our region is calling for military invasion in Syria. The question of an authority change in Syria, by whatever means, is not part of the common Arab initiative. We have agreed on those issues and we know that’s why Russia is obstructing the adoption of a resolution on Syria in the UN Security Council.

RT: Many think that the situation in Syria is declining, in part, due to the fact that Western states have not adopted the unified, solid position on Syria needed if the UN Security Council is to adopt a resolution. In Russia’s case the motivation behind stopping the resolution was clear, but the West is not as single-minded on Syria as it was on Libya. Do you think that’s true?

KK: The thing is, after what happened in Libya, any country would think twice before committing to specific measures. The situation in our region is extremely volatile. The region under the jurisdiction of the Cooperation Council remains fairly calm and safe. Thank God, our countries are doing all they can to keep it that way.

The policies of other states, however, are not helping to bring peace or stability to their regions. Countries are divided into two tiers – major and minor – according to their geopolitical standing, how close they are to one state or the other and their role in regional affairs, and so on. A regime change in a minor country would not lead to big changes on a regional scale. Syria, on the other hand, is very important to the region. We have to think very hard about possible repercussions and complications we might have to deal with before we interfere in Syria’s affairs.

RT: Taking into account the battle cries we hear, especially from American and European media, do you feel that a full-scale war might break out in the region that would harm all Gulf States?

KK: Obviously, having worked in the media for a long time, you understand a lot about politics. We’ve engaged in global politics for a long time too. Have the cries for battle ever stopped? We hear them constantly, throughout our lives. They come from the west, the east and the north. We can simply ignore those calls or work on our military policies. We have been hearing war drums throughout our entire lives and we’ve become used to them. But we must take the current situation seriously. It involves an atomic bomb which Iran has nearly developed, according to the IAEA. The region is unstable due to interference on behalf of various forces. Our own geopolitical situation is affected by what happens in Iraq, Iran and Afghanistan. The peace process is constantly threatened. Israel is still threatening, as it always has, to strike out against Iran and its nuclear program. We are concerned by the fact that a neighboring state appears to be working on a nuclear program which could lead to a region-wide disaster if an emergency occurred. Therefore we work, all day, every day, to relieve tensions in the region and to reach a mutual understanding. We have to work on that and we have to take the situation seriously. The war drums you mentioned are not quieting down and they won’t stop in the near future.

RT: Could you give us more detail on the discussion about security in the region?

KK: There are direct external threats coming from countries who don’t want stability and security in our region as well as internal threats, coming from within the region. Our relations with Iran are currently threatened. We find them unsatisfactory. They are unstable and contradictory, which we are unhappy about, especially as representatives of the Cooperation Council. We are beginning to fear deterioration in our relations with Iraq as well. They’re threatened by the unstable situation in Iraq which developed after US forces pulled out after changing the Iraqi government’s policies. Relations between Bahrain and Iraq have always been good, historically speaking, but the statements we hear coming from some Iraqi politicians and regional governors aren’t in line with that tradition.

I was referring to specific threats to Cooperation Council nations. There are also certain hidden threats to stability and security in the region. These have to do with Bahrain’s relations with its allies such as the USA, the EU and Russia. We’d like to have a clear strategy and clear mutual understanding of the problems of regional stability and security with all of our partners. We are trying to make our region safe for foreign trade vessels and contribute to global economic growth. If we and our allies had a clear cooperative strategy, we would have no problems with security and stability in our region. We can achieve that by establishing open and transparent relations with all of our partners, and that’s what we are aiming for.

KK: Yes, we do have such a program, but we are not going to use it to stand against anything else. The issue of Iran’s nuclear program is an international one. But we live in this region. And when it’s discussed with Iran, the conversation turns political and touches upon many other issues. When something concerns a particular region, the opinions of those living in that region must be considered. There are big and influential states in this region. The Cooperation Council must take their opinions into account. But I would like say that we are no less concerned about instability in the region than with the Iranian nuclear program. Sometimes we can’t help but feel that, seen against many other issues, it’s not our biggest concern. Getting back to the Gulf Countries’ nuclear program, I would say “yes”. But firstly, it won’t be built to oppose to any other regional nuclear program, whether it’s in Iran or any other country. Secondly, this issue is still being discussed and a specific legislative framework is being worked on with the IAEA. This program will be peaceful and transparent at every stage, just as it’s required to be. We are working on that with total understanding of our full responsibility.

RT: The forum tackling the challenges to regional security addressed the issue of strengthening co-operation with Russia, an important international stabilizing force. We know the position of Bahrain on this issue is. Do you think your partners in the Cooperation Council will listen to these calls and take any specific steps to make cooperation with Russia even closer than it is now?

KK: I can answer that positively. Not only on behalf of Bahrain, which cooperates with Russia in many areas, including that of regional security. Bahrain also cooperates with the US and EU countries, with China, Japan, India and many other states. We also see a positive response from Russia regarding all areas of cooperation and the benefit from it. Russia has always played a major role in international affairs. Russia is a great power. Russia should be present in our region. Its role is indispensable. Russia has put forward an initiative on security in the Gulf. We supported it and confirmed it in a joint Bahraini-Russian statement adopted during the visit of our King to Moscow and signed by him and President Medvedev. This initiative calls for all political forces in the region to develop a single approach to Gulf security.

RT:The last summit of the Cooperation Council for Arab States of the Gulf put forward a proposal to create a commonwealth. Have they taken any steps towards achieving this goal?

KK: The summit itself saw a number of steps on transformation of the Cooperation Council into a commonwealth, as proposed by the King of Saudi Arabia. A working group has been formed and the group is to hold a number of meetings to come up with its proposals in May at the annual summit of the Cooperation Council in Riyadh. Steps are being taken not only as proposals, but also in terms of concrete solutions.

RT: If you remember, in our previous interview we discussed the initiative by the King of Bahrain to set up an inter-Arabic commission on human rights and a special commission to gather evidence of human rights violations. Has this initiative been approved? If so, what’s been done so far?

KK: We’ve achieved two goals. The first is that a commission on gathering evidence of violations has been established. The commission is studying the events of the past year in Bahrain. It has submitted a report to the King, which, as far as I am concerned, has been broadcast live around the world. Now another commission to implement the 24 proposals listed in the report has been set up. Another thing is that a high-ranking governmental commission has been created to implement the tasks imposed on the government. All proposals concerning legislation and the judicial system will be submitted to parliament for approval.

The second proposal by our monarch was to create a human rights court in the Arab world, which is hugely important. Europe has an international court on human rights. America has a court on human rights with its headquarters in Costa Rica. Arab countries don’t have such an agency. Only the Arab Charter on Human Rights in place. We don’t have a competent body for anyone to address his or her issues with human rights violations. This proposal has been submitted to the Arab League’s Secretary General and will be considered at the assembly in March this year. We are watching this process and continue working on its adoption. The Arab world is part of the whole, wider world and in no way differs from it. We are not trying to condemn anyone, but the point is that our society must move forward. And for us that is a crucial.