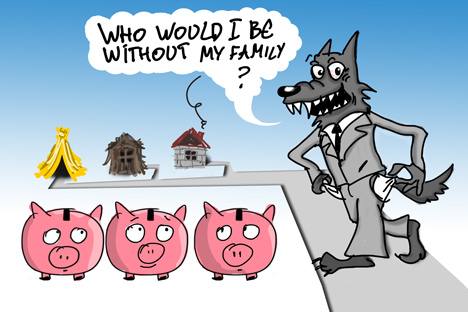 As a rule, a person who publicly accuses certain state officials in Russia of corruption becomes himself a subject of criminal prosecution. Corrupt top-level officials tend to keep their money in foreign banks, while in Russia they have no property of their own – their expensive cottages and luxury cars are formally registered to relatives or straw men. Even a watch worth hundreds of thousands of dollars can appear to be a gift from an old friend or family member and is never connected with the official’s professional activity. Although they may live in magnificent mansions and spend hundreds of thousands of dollars abroad, when in Russia, Russian officials are honest people of modest means. This is what even the most thorough inspections conducted internally in the event of corruption allegations usually show. As a result, those accusing officials of corruption become slanderers and are charged with a criminal offense.

In a democracy, those in power always represent the interests of one or another social group. An official’s career depends on whether he selects the right social group to represent and the degree to which this group shapes public opinion.

In contemporary Russia, the situation is totally different –– an official’s career never actually hinges upon any social group, but instead depends entirely on his relationship with the small number of people also endowed with government powers. These people are basically divided into two groups –– those on whom an official’s appointment and promotion depend, and those who can remove him from office. In this paradigm, there is no role for society, and ordinary citizens are completely dissociated from the process. As a result, at all levels, the government depends entirely on itself.

Therefore, in order to truly fight corruption in Russia, it is necessary to create a lawful and practicable mechanism to enable the population to recall officials from all branches of federal and local governments. The right to initiate a recall of this kind should be vested in a civic institution that is independent of the authorities.

This mechanism would promote a reduction of corruption by the authorities, because corruption is necessarily connected with the poor quality of work by government officials; in fact, corruption replaces their work. The current widespread practice of purchasing political offices will become largely meaningless. At the same time, the level of protection for those who report corruption will dramatically increase.

But the difficulties of fighting corruption reach beyond Russia’s borders. There are many countries that offer easy schemes to launder corrupt money and channel it to the American and European financial markets. Additionally, national law enforcement agencies are often unable (or unwilling) to conduct pre-investigation inquiries into corruption outside their limited jurisdiction, especially in countries where property is effectively protected by the system of state authorities.

To combat this problem, a special United Nations center must be created to fight corruption and protect witnesses. This center would incorporate a single supranational body to develop and manage a unified international witness protection program along with a task force authorized to conduct additional investigations of corruption allegations against top officials’ allegedly unearned monetary assets and foreign property. If this information is confirmed, relevant materials could be submitted to the national law enforcement agencies of all countries involved for them to take action in accordance with applicable national laws. The same body should be entitled to provide witnesses reporting corruption with international legal protection and immunity from prosecution during the period of the investigation.

Naturally, this could be interpreted as interference in the internal affairs of the countries in question. However, efforts to curb corruption, which involves proceeds stored and used beyond national borders, can no longer be treated as the internal affairs of the relevant country or as the exclusive domain of the countries where a high-ranking official resides – if for no other reason than because that illegal income will subsequently be moved freely and legally out of those countries and all over the world. If there is no procedure to make these money transfers extremely difficult, if not impossible, there will be no hope whatsoever in winning the war against corruption.

Russia and the United States, as permanent members of the UN Security Council, are well placed to propose a relevant joint initiative to the world community, for example, in the form of an international convention. In our opinion, the countries that refuse to accede to it should be subject to close attention as far as monetary flows are concerned, just as offshore territories are now.

Anatoly Golubev is Chairman of the Board of the NGO Committee for Fighting Corruption and steering committee member of UN Global Compact Network Russia.

This article is abridged from the original version. It can be read in Russian here: http://www.com-cor.ru/en/zashita-zayavitelei-o-corrupcji