Oil and sanctions are not a one-way bet 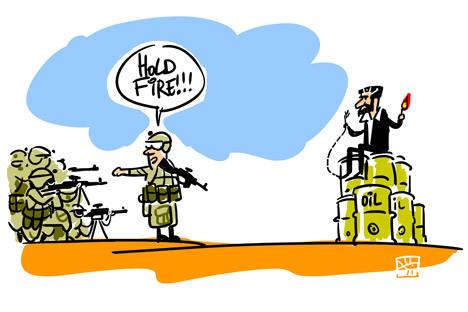 The EU agreement to an oil embargo and other measures on Iran marks the next ramp up in the sanctions pressure over Iran’s nuclear programme.

The US is currently engaged in a global diplomatic mission aimed at persuading other countries to curtail their business with Iran ahead of the imposition of US sanctions on foreign financial institutions which fund Iran’s oil trade that could see them cut from the dollar financial system.

These are significant measures and potentially highly disruptive for Iran, whose economy was already under pressure and which faces significant domestic political turmoil. Against that background it is no surprise that Iran has been making unusually bellicose threats to free transit through the Strait of Hormuz. That in turn has pushed up the oil price since the beginning of the year by $4-6/bbl (Brent), we estimate.

So, will this rising sanctions pressure drive oil prices even higher?

In fact, that is by no means certain, because under the bluster, oil markets look substantially oversupplied for the first time in two years. Moreover, the demand side risks are most likely on the downside and if OPEC does not rein in production we expect oil prices will weaken sharply and could easily trade below $100/bbl (Brent).

This is how the numbers stack up. All the major external forecasters (EIA, IEA and OPEC) put the demand for OPEC crude in 2012 at 30mmbd. Current OPEC production is running at just under 31mmbd. If sustained for the year, that 1mmbd excess supply would boost inventory levels and could leave OECD days forward cover (inventory/consumption) at over 61 days by year end. That is higher than it was in the first half of 2009 when Brent averaged just $60/bbl and OPEC was aggressively cutting output. With global GDP forecasts being cut and very weak oil demand numbers for the US so far this year, demand could easily turn out flat on 2011, rather than up 1mmbd or so, as is currently expected. That would clearly make the oversupply situation worse.

It is not for nothing that OPEC set its quota at 30mmbd in December. That was a good stab at the right sort of number required to balance the market. However, since OPEC did not allocate individual production targets, it is dependent on voluntary measures to curb output. We believe most OPEC members expect Saudi Arabia to shoulder the bulk of the downward adjustment since its own supply surged 1mmbd over the summer in response to the loss of Libyan volumes but it has shown no sign of doing so, yet. It is also under pressure from the West and its Asian customers to provide alternative supplies to Iranian oil, and from Iran not to take its markets.

We think it is clear that OPEC needs to cut output if it wants to keep Brent above $100/bbl. There are three obvious routes it could do so, first, as a matter of choice by OPEC members, second, because of disruption to production in OPEC members besides Iran, or third, because Iranian oil is forced from the market.

In fact, we think it is more likely that OPEC’s net production capacity will grow by 0.5-1mmbd, mainly as Libya returns to the market and as Iraqi export capacity increases, boosting production (most likely), or spare capacity. There is the possibility that the Arab Spring might come to other OPEC members, but that does not seem particularly likely at present, except, just perhaps, in Iran.

Which brings us to Iran. There is clearly the possibility that Iran might carry out its threat to disrupt shipping in the Strait of Hormuz. Some 17mmbd of liquids, including NGLs (natural gas liquids) and refined product as well as crude, and 170 thousand tonnes of LNG transit the Strait daily. If the Strait was blocked it might be possible to find alternative pipeline routes for just 3-4mmbd of the liquids in short order and none of the gas. Which means that the loss of global energy supply is simply too large to be allowed, as is reflected in the US’ reported communication to the Iranian regime that attempting to interfere with shipping traffic in the Strait would be a ‘red line’. Such an action would also cause serious problems for states which are comparatively friendly toward Iran, notably China. And Iran has history with the US in the Strait. Operation Praying Mantis at the end of the Tanker War (1984-88) was a heavy naval defeat for Iran which is widely believed to have expedited the end of the Iraq/Iran war. So even if sanctions do substantial damage to Iran’s export revenues, it will not make a serious effort to disrupt shipping traffic, and, of course all of its own exports, if it is a rational actor.

Then there is the question of how effective sanctions might actually be. US and EU sanctions on Iranian oil will generally not take effect until July at the earliest. The Obama administration has a fair degree of latitude over how firmly it will apply its sanctions powers. Before they apply, it needs to have found that the price and quantity of alternatives to Iranian oil are sufficient to allow purchasers of Iranian oil to ‘significantly’ reduce their imports from Iran. There is also a national security waiver. Given its other diplomatic interests we suspect the US will tread carefully before it applies meaningful sanctions to the likes of China, Japan, India, South Korea and Turkey.

The history of oil sanctions would also tend to suggest that where there is a will there is a way. That means Iran may well be able to maintain a large portion, probably even the bulk of its current export volumes intact, albeit at some commercial cost which might be considerable.

There are even signs that Iran is at least toying with the idea of restarting talks over its nuclear programme.

Sanctions could also hit Iran’s product imports, notably gasoline, but these have been virtually eliminated (on official data) as demand has dropped following the curtailment of subsidies and as Iran has reconfigured its petrochemicals industry to turn out low grade gasoline.

The less effective sanctions are, the less likely is Iran to take precipitate action in the Strait.

Still, if things were to kick off, there is no question that oil prices would spike up a very, very long way. The extent to which they remained extremely high would than depend on how long the disruption looked like lasting.

If sanctions or the collateral implications of military action eliminated Iranian exports, other OPEC members could probably cover, assuming the Strait was open, but spare capacity could be very tight and prices, most likely, well above current levels.

Thus we currently appear to be heading down a supply/demand/inventory path that will lead to a considerable downward oil price correction but the risk of a significant disruption to supply is keeping the price up. The history of market suspense about potential action over Iran’s nuclear programme suggests that bluster alone will not prove adequate to support the price. Output needs to fall voluntarily or involuntarily from current levels if OPEC wants to keep the price above $100/bbl. The longer oversupply lasts, the harder OPEC will have to work to recover the price should it crack.

With respect to Russia, given its high exposure to oil and gas revenues, the oil price has a very real impact on the country’s domestic economy. On the one hand, high oil prices clearly benefit Russia’s economic position, although in the longer term high prices can hinder broader economic development – the classic resource curse. From the perspective of the current economic outlook and government finances, VTB Capital’s 2012 Brent forecast of $100/bbl could see real GDP growth of 3.5% for Russia but it would also be running a fiscal deficit of some 1.5% of GDP.

It may seem intuitive that high oil prices mask the need for structural economic reforms, but the Russian government is now convinced that the economy has reached its structural limitations, and will not register any more growth, high oil prices notwithstanding.  In this situation, higher oil revenues will simply result in higher levels of imports and inflation. Low prices will clearly be a catalyst for speedier reforms, but even at higher prices such reforms will follow.

Colin Smith is the Head of Energy Research for VTB  Capital.