A night alone in the Ussuriski taiga 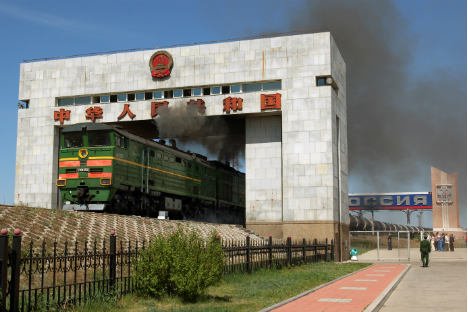 Trekking a 1 km high mountain near the Russia-China border, spending a chilly night alone in the taiga forest, and later being interrogated by FSB (former KGB) on the suspicion of spying – it was a very special week-end.

Around 20 kilometres away from the beautiful city of Khabarovsk, lays a set of deeply forested mountains that border China. It is in the vicinity of these mountains that the Ussuri and Amur rivers split and the Middle Kingdom begins. The Ussuriski Taiga (temperate boreal forest) is the home of the world’s largest cat, the Amur Tiger. The taiga also has the rare Amur leopard, as well as 2 species of bears.

I was in Khabarovsk for a few days one autumn and I wanted to explore the colourful forests in the region and see the beautiful autumn foliage. My friends recommended Peak Heksir, a mountain from where both the city of Khabarovsk and China were visible. The days were still warm and I was set to hike with 2 friends who had done this trek many times.

It started out well. The hike through the forests was challenging but manageable. For someone from the far tropics, very few natural phenomena compare to the sight of the Russian mountains in all their autumn glory. Autumn, a season celebrated by great writers such as Pushkin, turns forests into a collage of bright colours. We trekked our way up the green, yellow and orange forest and by late-afternoon, we had conquered Peak Heksir. At 970 metres above sea level, we could see the church domes of Khabarovsk, the Amur and Ussuri rivers and China.

It was when the downward descent began that all the trouble started. Tripping over untied shoe laces, I realised that my two friends had gone farther than I could see them. Our cell phones were out of range and that’s when I figured that this could be a potential problem. I managed to make one call to a friend in Khabarovsk and then realised that my battery was down and out.

I decided to try and find my way down the path. It was obvious that China was to my left and Russia to my right. As I headed down, the temperature plummeted and it was quickly getting dark. It was obvious that my loudest screams weren’t being heard and that I was not heading in the right direction. Well beyond 7:00 pm, it was getting dark in a hurry and I knew that I virtually had no chance of finding the path and the asphalted road.

So there I was, in the Ussuriski Taiga with no warm clothes, no matches, no food and not even a bottle of water (although I was close to a waterfall). My cell phone battery was dead and I had no way of getting in touch with anyone. Cold autumn winds blew and noises, both real and imaginary, confronted me. A hopeless situation, one might say. But if I was going to die, as I thought I might, the best thing to do was to focus on what’s right. It was a beautiful night and the sky was filled with an endless galaxy of stars. The moonlight occasionally penetrated through the branches and there were moments when I was fooled into thinking that rescue services were trying to find me using flashlights. It was never-the-less a hauntingly romantic night and the calm of the forest helped me meditate deeply. I have always valued privacy and here I was in the wild, getting all the privacy in the world.

As it got colder, I had no choice but to just stay tough and ignore the bone-chilling wind. I knew I wouldn’t die of thirst and it wasn’t cold enough for me to get hypothermia. Suddenly, all those local newspaper reports about berry-pickers getting eaten by bears did not seem funny anymore. I no longer considered the people who disappear in forests on ‘RIA-Novosti’ reports as “stupid whackos.” It was only then that I realised the kind of stress that these people and their families went through.

I estimated that it was close to midnight as I heard the howling of wolves. (Wolves have been extinct in that part of the Russian Far East for over a hundred years, so it could have been my imagination, but my friends who were looking for me all night, also claimed to have heard them.) I could then imagine the headlines: “Indian Journalist killed by wolves near the Russia-China border.” But optimism got the better of me and I could slowly sense that the coldest part of the night was beyond me. Ever-so-slowly, it was getting bright and then I could clearly see the waterfall. I bathed in the waterfall to get warm and as the sun rose over the beautiful orange and red leaves, I kept walking in the right direction and within 2 hours, I found the highway!

In a scene reminiscent of ‘The Terminator’ landing in Los Angeles, two shocked villagers on a Sunday morning walk were shocked to see an Indian walking out of the taiga. After I narrated my experience, they told me how to get to Khabarovsk and soon I was in a local bus heading to the city. A few phone calls using the conductor’s cell phone and everyone knew I was safe.

A police jeep with my hiking buddies stopped the bus and I went through routine police protocols explaining what happened. This incident rattled the Khabarovsk police so much that the commissioner of the Khabarovsk police turned up at the Osenorechka police station to directly question me. The police chief reminded me that I was in a restricted and sensitive border zone without permission and if I was lost “there could have been a diplomatic crisis.” I wasn’t convinced that the Indian Government cares that much about me.

The policemen on duty, instead of being harsh, were relieved that I was alive and were extremely courteous. Then a pretty reporter from a Khabarovsk television channel turned up to interview me outside the police station. The reporter passed on the interview to Moscow, where Russian National TV Channel NTV made me a national star a few days later when I was featured in a news programme. Many friends of mine across the country wondered how I could smile so much and be that cheerful on television after such an experience. I wouldn’t have been smiling if I was dead: that’s for sure.

And so, the story seemed to end well. I was safe and on my way to a friend’s house to pack my bags and get back to Sakhalin, but then came a phone call from the Federal Security Service (FSB), the successor to the KGB. The night before, they had accused my friends of murdering me and dumping me in the forest. But when they saw happy pictures from the LCD viewer of a digital camera, they had a change of heart.

I had watched way too many James Bond films while growing up and the prospect of an encounter with the ‘KGB’ made me more nervous than having to deal with a hungry tiger in the taiga. The young intelligence officer was polite and dare I say ‘friendly.’ When they realised that I was a humble Indian journalist and not a spy, they were even nicer than the police. I was able to board my flight from Khabarovsk to Sakhalin and pretend at least temporarily that nothing special happened over the autumn weekend.

I wouldn’t recommend that anyone get lost in any forest but my basic tip would be to always have a backpack loaded with water and food, an extra and full charged cell phone battery, a lighter or matches and of course warm clothes, no matter what the season. These things make survival a lot easier.