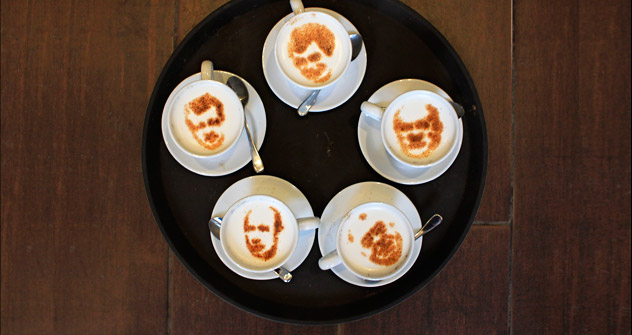 Cafe chain Kofein launched a symbolic presidential election on Feb. 1, 2012. Customers were asked to order a cup of coffee displaying a reproduction of their favourite presidential candidate, realised with cinnamon powder on milk foam. The results of

With slightly less than a month to go until Russia’s presidential elections, the field of candidates is down to five.

This year Russian citizens will again go to the polls on March 4 to elect the country's next president. Current President Dmitry Medvedev decided not to run for a second term, instead endorsing the candidacy of current Prime Minister and former president Vladimir Putin. Putin's challengers include billionaire and former head of the Right Cause party Mikhail Prokhorov, leader of the Communist Party Gennady Zyuganov, the head of the Just Russia party Sergei Mironov, and Vladimir Zhirinovsky, the leader of the Liberal-Democratic Party of Russia.

The most eccentric candidate

Vladimir Zhirinovsky, head of the Liberal-Democratic Party of Russia, is not lacking in perseverance; he has made a record number of attempts to win the Kremlin. This is the fifth time Zhirinovsky has sought Russia’s top political post. Although he has never won even a 10th of the votes, Zhirinovsky seems to take his failures in stride. Over the past 20 years, he has positioned himself as a radical opposition leader protecting the interests of the most vulnerable segments of the population. In his election campaigns, he always focuses on social benefits, pensions, education and rights of employees. This time, he promises broad amnesty and a ban on firing senior citizens. His campaign slogan is the cheery: “Zhirinovsky, or it’ll be worse.”

Zhirinovsky is easily Russia’s most eccentric politician. In recent years, he has collected an impressive arsenal of tools to stay in the spotlight including active use of profanity, insults against opponents (and sometimes voters, too) during election debates and multiple lawsuits. While many voters see him as just a clown, experts say he is a professional politician.

“He is much less expressive than many think he is,” said Vladimir Solovyov, a TV presenter and frequent host of televised debates. “He has never come to my programs unprepared; he always considers everything in detail. He knows how things are on a given day, he knows who his opponent will be. He always monitors public opinion and analyzes it.”

Nostalgia for the past

If an election is held anywhere in Russia, the Communist Party of Russia (KPRF) is certain to be involved. And the name most associated with Russia’s Communists is that of Gennady Zyuganov.  Zyuganov narrowly lost the 1996 presidential election to Boris Yeltsin, and the party maintains a steady base of support. The Communists hold the second-largest number of seats in the State Duma after United Russia. But the supporters of the KPRF are mostly elderly people who are still nostalgic for Soviet times.

The Russian Communists’ program is typical of Communist parties everywhere. They promise jobs, the rebirth of industry, a better life for farmers and workers, and a smaller role for big business in both the economy and politics.

However, experts believe that Zyuganov has failed to become a strong opposition leader. “While being an opposition leader, he has retained the typical features of a Soviet boss,” said Grigory Golosov, a professor at the European University in St. Petersburg. “First and foremost, his tendency is to compromise and commit to playing by the rules, even if the other party blatantly breaches them.” According to political commentator Oleg Kashin, this quality has allowed Zyuganov to carve out a niche for himself in Russia’s current political climate.

Sergei Mironov, head of the Just Russia party is also seeking the presidency. Over the six years since his party was created, Mironov and his team have failed to counter the party’s reputation as pocket opposition created by the Kremlin. Mironov has repeatedly stated that he supports Vladimir Putin, while criticizing the ruling United Russia party. “This dual position is still fresh in people’s minds. This is something voters cannot understand,” said Valery Khomyakov, general director of the National Strategy Council.

Political analyst Dmitry Travin agrees that voters don’t trust Mironov. “Of course, people understand that Mironov, as someone who has suddenly seen the light, cannot be considered a real opposition leader. He received some protest votes, just because other parties were not admitted to the elections, but this is not enough to make a real opposition leader,” said Travin.

Of all the presidential hopefuls, Mironov is the least known. Political analysts also say that his program lacks specificity. Yet, Mironov has won some notice in Moscow for making an announcement that, should he win, his goal is “to become interim president, carry out political reforms, begin socioeconomic reforms and resign early, no later than December 2013, and schedule new elections for March 2014.”

Among the five candidates, Mikhail Prokhorov is the only one not affiliated with a party. The businessman’s lack of political experience is not the only way he stands out from the crowd – at 6 feet, 5 inches, he is also easily recognizable.

The key points of Prokhorov’s program include developing small and medium-sized businesses, boosting industrial technology, and fighting corruption. But he makes no mention of pensions and salaries, showing that his target audience is not the more vulnerable segments of society. Rather, he hopes to attract the attention of the middle class and those who have been taking to the streets in protest.

But experts doubt that disgruntled citizens will support the businessman. “A man who has so much money is by definition dependent on the authorities,” said Sergei Mitrokhin, chairman of the liberal Yabloko party. Others point to Prokhorov’s brief involvement with the Right Cause party as another indication that he is reluctant to really go against the Kremlin. But Stanislav Kucher, a political commentator with business daily Kommersant, thinks that it is too early to count Prokhorov out. “It’s not that important how it all started. At some point, Prokhorov can start playing his own game, if only because he obviously likes drive more than cash. In this case, he will have to transform from ‘controlled oligarch’ into a completely new man ready to risk not just his money,” Kucher said.

For the sake of stability

The name Vladimir Putin will appear last on the 2012 presidential election ballots but both political experts and public opinion groups expect him to end up first. Putin’s main trump card is his previous achievements. He first came to power in the unstable late 1990s when the country was gripped by organized crime and property redistribution , the Caucasus were engulfed in war, and terrorist attacks were common. At that time, Putin was hailed as a leader who could bring stability and prosperity to the country.

Today, Putin’s image has not changed much. He is a confident politician, well connected and experienced, and backed by a strong administration. He promises a peaceful life, stability and evolutionary development for the country. But is this the kind of leader Russia still needs?

“The new generation does not understand why it needs Putin and his government with its stability,” said Vladislav Inozemtsev, director of the Center for Post-Industrial Studies. “These people don’t remember the hard times, and Putin’s constant references to how awful it was in the 1990s don’t affect them. The educated Russians are interested in politics. but Putin only promises them higher incomes and career opportunities.”

However, it remains unclear how large this portion of voters is, and whether the majority of Russians feel the same.

Ratings of the candidates for Russia's 2012 presidency. Source: VTsIOM. Click to enlarge.